A. J. Casson
Group of Seven

I am publishing a page entitled Canadiana 1. It should be revised taking into account a group called Canada First and a figure: William McDougall.  McDougall and his party were pushed back to North Dakota by Métis led by Louis Riel, in 1869, when they attempted to enter the Red River Colony. They wanted to build a White and Protestant Canada West and spread hatred as a means to achieve their goal. French Canadians were not wanted west of the province of Québec.

Nouvelle-France’s Last and Lost Battle: The Battle of the Plains of Abraham
The Battle of Fort William Henry & Cooper’s Last of the Mohicans
Louis-Joseph de Montcalm-Gozon, Marquis de Saint-Veran 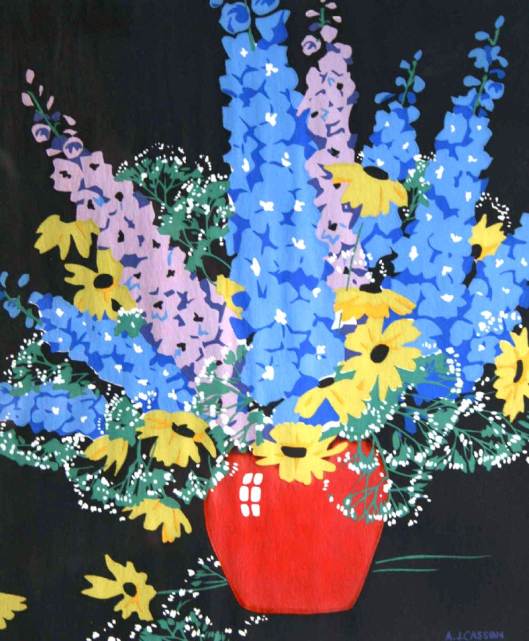 I wish to thank WordPress author Andrés Cifuentes for nominating me for the above prize. I am most thankful for this nomination. I have discovered little treasures on Mr. Andrés’ site, a site he shares with colleagues.

There are rules attached to premios (prizes) one of which is to nominate other colleagues. Whom does one chose? Every text unveils a vision that is both unique and universal.

I will nominate persons whose posts I follow, or try to. However, I will not ask that you to nominate anyone for this prize unless you wish to do so. Some of you haven’t the time to nominate 15 colleagues. I hope I am not offending Mr. Cifuentes. Days go by at an alarming rate.

I had a birthday in July, on the same day of the month as Jean de La Fontaine. He will live forever in the fables to which he imparted eternity. As for me, on that particular birthday, I realized that my life was a peau de chagrin (shrinking shagreen).

The painting featured above is by A. J. Casson, a Canadian artist who was a member of the Group of Seven.

At the foot of this post, I have inserted a video showing Yehudi Menuhin playing the violin with his friend French-Canadian fiddler Jean Carignan. You will notice that Canadian fiddlers have been influenced by the music of Ireland and Scotland. The belt worn by Jean Carignan is the traditional ceinture fléchée, a belt with arrows. The music was composed by Québec composer André Gagnon. It is not a very good recording, but the event is memorable.

My best regards to all of you.

A. J. Casson was a member of the “Group of Seven”

If we tally songs composed by the voyageurs, we have the following list:

Included are Les Roses blanches, Petit Rocher or Cadieux’s Lament, and C’est dans la ville de Bytown. One of these songs, Petit Rocher, could be a forestier song. When dealing with the songs of the voyageurs, too strict a categorization seems injudicious. For instance, we have sixty-five versions of Le Canotier. Consequently, Madeleine Béland suggests that the popularity of l’abbé Casgrain’s Canotier warrants its folklorisation: “Cette chanson, le Canotier, a obtenu la faveur du public à un point tel que l’on peut admettre sa folkorisation.” [i]  So, if we include Patrie littéraire or Literary Homeland songs, we reach a total of eight (8) voyageur songs.

As for Jean-Charles Taché’s Cadieux (Forestiers et Voyageurs, Chapter 15), Taché considers him a voyageur.  As the story goes, Cadieux is a French-Canadian voyageur of the 18th century who lived in the Ottawa River region. When his cabin was attacked by Indians, he sent his family down the rapids in his canoe and stayed behind to prevent pursuit. The Virgin Mary is supposed to have guided the canoe through the rapids, which were generally portaged. Pursued by the Indians through the forest, Cadieux gradually weakened; he dug his own grave, erected a cross above it and composed a ballad about his misfortune, which he wrote in blood on birchbark; it was found by those who came to look for him.” [ii]

However, Barbeau dismisses Cadieux or Cayeux, as a voyageur. He considers him a coureur de bois whose story is not a legend but a true story. [iii]  Given that French-speaking Canadians have often associated forestiers and voyageurs, both of whom travelled to the “pays d’en-haut,” (the north, or the countries above), it may be best in this case to leave a little room for interpretation. Taché’s novel, published in 1863, is entitled Forestiers et Voyageurs, which suggests he perceived kinship between the two groups. In Forestiers et Voyageurs, the main character, le père Michel, is a voyageur.

In his article on the Ermatinger songs, Marius Barbeau quotes a passage from R. M. Ballantyne’s (24 April 1825 – 8 February 1894) Hudson Bay (1843). Ballantyne was a Scottish juvenile fiction writer who praises not so much the voyageurs’ rendition of À la claire fontaine and Les Roses blanches as the feelings they evoke. These feelings border on synesthésie, a combination of sensory stimulation (hearing, seeing, etc. at the same time):

In these fairylike boats (birch bark North canoes gaudily painted on the boys and stern), we swept swiftly (from Norway House) over Playgreen Lake, the bright vermilion paddles gleaming in the sunshine and woods echoing to the lively tune of “À la claire fontaine” sung by the two crews in full chorus.  While yet in the distance the beautifully simple and lively yet plaintive song, so well suited to the surrounding scenery and yet so different from any other air, breaks sweetly on the ear; and one reflects with kind of melancholy, how far the singers are from their native land (Lower Canada), and many weary days of danger and will pass before they can rest once more in their Canadian homes.  How strangely too upon their nearer approach is this feeling changed for one of exultation, as the deep and manly voices swell in chorus over the placid waters.  In the canoe, bounding merrily up the river, while the echoing woods and dells responded to the lively air of “Rose Blanche” sung by the men as we swept round point after point and curve after curve of the noble river.  I have seen four canoes sweep round a promontory suddenly and burst upon my view, while at the same moment the wild romantic song of the Voyageurs as they plied their brisk paddles struck upon my ear; and I have felt thrilling enthusiasm on witnessing such a scene.  With hearts joyful at the termination of their trials and privations, sung, with all the force of three hundred manly voices, on of their lively airs, which rising and falling in the distance as it was borne, first lightly on the breeze, and then more steadily as they approached, swelled out in the rich tunes of many a mellow voice, and burst at last into a long enthusiastic shout of joy.  Away we went then, over the clear lake, sing “Rose Blanche” vociferously. [iv]

As you may have noted, in the above excerpt, Barbeau mentions Rose Blanche, a  song which Frances Anne Hopkins also heard. I still doubt that Rose blanche was composed by voyageurs.  As Wentzel stated, the voyageur’s songs could be “smutty.”  So it is possible that Rose blanche was simply a favorite, as was À la claire fontaine.

Grace Lee Nute wonders why À la claire fontaine was a “favorite.”  I have reflected that the melody is lovely and that few songs could express the degree to which these men remembered?  They remembered France.  They remembered their home in Bas-Canada. They remembered the woman they loved: I have loved you for a long time / Never will I forget you. (Il y a longtemps que je t’aime / Jamais je ne t’oublierai.)

We’ve come to the end of this topic. I may list the songs. That would be a blog without comments. I wish we had Wentzel’s collection and the songs of the Falcon. They are lost. But we know that voyageurs sang while facing great dangers.

For more information on the voyageurs, I would suggest you read Carolyn Podruchny‘s Making the Voyageur World: Travelers and Traders in the North American Fur Trade. I bought it a few years ago and would classify it as a “good read.”

(translation) This song has so pleased the public that we can consider it folklore.)