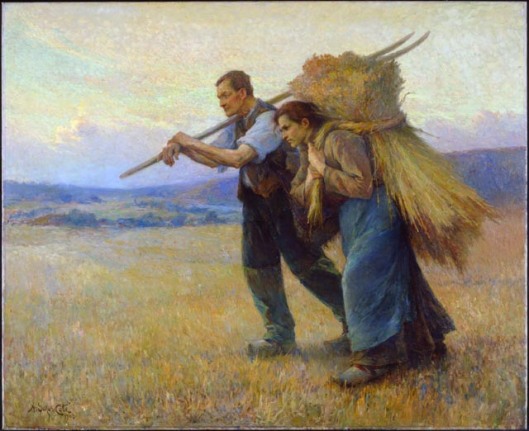 (Without man the land is not fertile.  It is because it needs man that man is tied to the soil, that he is the prisoner of thirty acres of land.)

Trente Arpents is considered the last of the regionalist novels.  It is a gem of a novel and won its author, Ringuet, considerable acclaim. Ringuet is a pseudonym for Dr Phillippe Panneton (30 April 1895 [Trois-Rivières] – 28 December 1960 [Lisbon]), a medical doctor who went on to write more novels and became a diplomat.

However, among his other novels, none is so moving as the story of the rise and fall of Euchariste Moisan who is wedded to the trente arpents he has inherited from his uncle Éphrem.  L’oncle Éphrem and his wife never had children, but they brought Euchariste whose entire family perished in a fire when he was still a tiny child.

At the very beginning of the novel not only does Euchariste learn that he will inherit his uncle’s land, but arrangements are being made for Euchariste to marry a neighbour’s daughter who will dutifully have “son nombre,” or the number of children she is destined to bear, as though her numerous and draining pregnancies had nothing to do with sexual intercourse.

Soon after Éphrem tells Euchariste that when he dies Eurcharist will inherit the thirty acres. Éphrem dies and Euchariste finds himself the owner of the thirty acres land the habitants of New France, rented from their SEIGNEUR.  Because Éphrem dies, Euchariste and Alphonsine may marry a little earlier than anticipated and occupy the large room: “la grande chambre”  The household also includes “la vieille Mélie,” an unmarried elderly woman who simply arrived at Éphrem’s door and never left.  Mélie helps Alphonsine  until she is very old and dies almost imperceptibly in her chair.  As for Alphonsine, she gives birth first to a son, Oguinase, then a daughter who dies shortly after the birth of the couple’s third child.

(He welcomed these births, without pleasure, yet without regret.  Alphonsine simply had to have ‘her number’.)

In the second part of the novel, appropriately divided into the four seasons, Euchariste is more of an owner than a farmer. Tilling the land and looking after the farm animals is onerous.  Despite years of draught, Eucharist prospers.  He puts money in the notary’s safe regularly.  As for Alphonsine, she is raising her children and still “féconde” (fertile).

At this point, Éphrem is asked to see the curé, the parish priest.  Oguinase is old enough and sufficiently gifted to be recruited for the priesthood by the curé.  He will not have to pay tuition fees.

So Oguinase leaves for the petit séminaire, the private school, now abolished, that allowed graduates to enter the priesthood, le grand séminaire, or university (law or medicine).  Euchariste talks about his projects.  On their way home, they visit a cousin living in a village.  The house is more humble than Euchariste had expected.  Euchariste talks about his projects: raising hens.  Two events now mark the year: Oguinase’s departure for the college and his return.

Euchariste hopes his son Éphrem will help him more and more, but Éphrem is growing into rebel.  Moreover, the world is changing.  Machines are being used by farmers, machines that can cut fingers off, and cars that kill Euchariste’s hens.  The parist has grown to such an extent that a new parish is founded.  All around him, Euchariste’s world is changing and his new circumstances cause him to stiffen.

Moreover, it seems Alphonsine is again pregnant, but she feels that something is amiss.  She sees her reflection in a mirror and the woman looking at her is no longer Alphonsine. In the mirror she sees an old and sick woman.  A doctor is called who tells her to stay in bed, her death-bed.