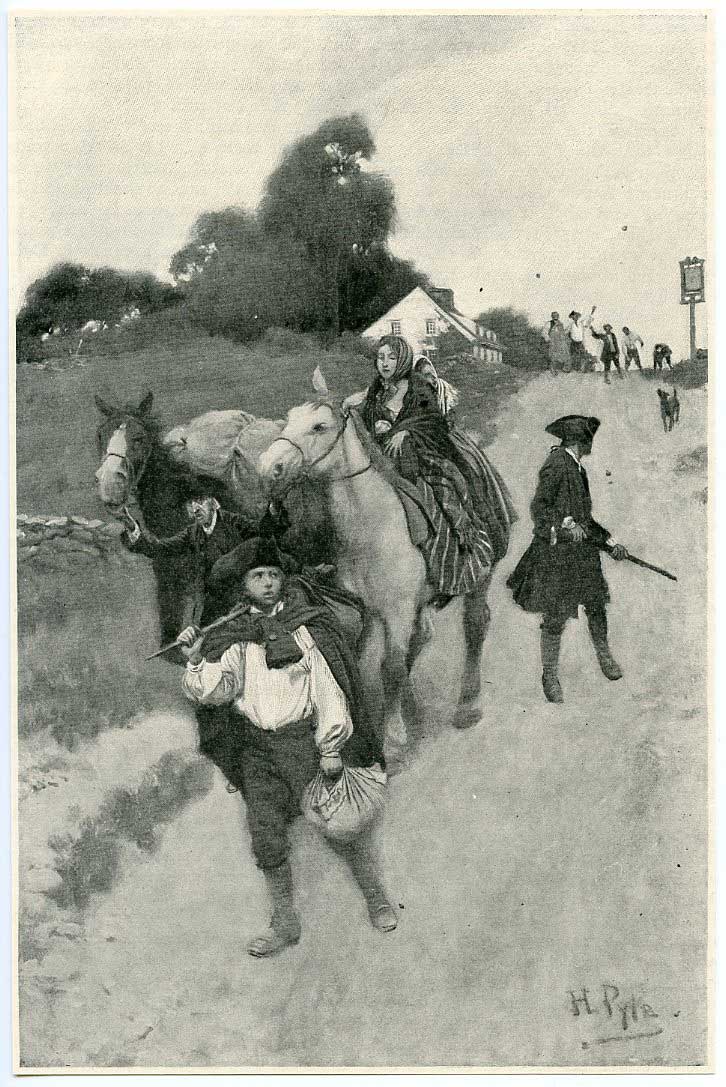 Depiction of Loyalist refugees on their way to the Canadas during the American Revolution,  (Photo Credit: Wikipedia)

The image above belongs to: https://howardpyle.blogspot.com/2010_04_01_archive.html
Ian Schoenherr

We have seen that the slaves in Nouvelle-France were mostly the Indigenous people of North America who themselves had slaves. Slavery between Amerindians is humiliating, but it is not racism. Amerindian nations fought one another and the better warrior enslaved rival and lesser warriors.  For the purpose of this post, suffice it to know that as France grew more vulnerable. France was outnumbered. After losing the battle of the Plains of Abraham, thus named because the land where the battle was fought belonged to fisherman Abraham Martin, Montreal capitulated, but its native allies were no longer protected. (See The Capitulation of Montreal, Canadian Encyclopedia.)  In fact, they were at the mercy of the inhabitants of Britain’s Thirteen Colonies. They feared a land rushes, but Chief Pontiac, an Ottawa leader, fought the Thirteen Colonies quite successfully, which he could not do indefinitely.

No authentic images of Pontiac are known to exist. This interpretation was painted by John Mix Stanley. (Photo and Caption Credit: Wikipedia)

To protect Amerindians, England issued the Royal Proclamation of 1763, providing Aboriginals with a vast reserve. The territory was large and nearly impenetrable. Later, the Act of Quebec (1774) ended attempts to assimilate the former New France. A very large province of Quebec was created, which, in the eyes of American patriots, was an Intolerable Act.

The light pink shows the land where the Indigenous population of Canada could live without fear of losing their land. In 1775, Louisiana belonged to Spain. In the second map, we see Quebec as it was in 1791, under the Constitutional Act. We also see part of Rupert’s Land.

The future United States signed a Declaration of Independence on 4th July 1776 and it then fought its Revolutionary War, or War of Independence, from 1675 to 1783, defeating Britain. This victory was formalized by the Treaty of Paris 1783.

However, among Americans, some families and individuals did not approve of independence. They fled to the large British province of Quebec. To help United Empire Loyalists, the large Quebec was divided into two Canadas: Upper Canada and, lower down the St Lawrence, Lower Canada. The Constitutional Act, which divided the Province of Quebec, was legislated in 1791.

The Constitutional Act did not divide the province of Quebec into an English-language Upper Canada and a French-language Lower Canada. The Eastern Townships,[1] the area of Quebec where I live, was given to the Loyalists and their slaves, whom they were allowed to bring to Canada as part of their property. The Loyalists also settled in Ontario, New Brunswick and Nova Scotia.

The arrival of the Loyalists was a blessing and a curse. The future Canada welcomed the Loyalists, Whites and Blacks. However, the citizens of the former New France were a minority.

The earliest known image of a black Nova Scotian, in British Canada, in 1788. He was a wood cutter in Shelburne, Province of Nova Scotia. (Photo credit: Wikipedia)

The Blacks in Nova Scotia

Nova Scotia would be Black slaves’ best destination. Although the Imperial Act of 1790 assured slave owners that they could retain Black slaves, in 1788, Nova Scotia abolitionist James Drummond MacGregor from Pictou “published the first anti-slavery literature in Canada and began purchasing slaves’ freedom” (…).  He set an example. Many Nova Scotia Loyalists freed their slaves. (See Slavery in Canada, Wikipedia.)

Until recent reforms in immigration, about 37% of Canada’s Black community lived in Nova Scotia. 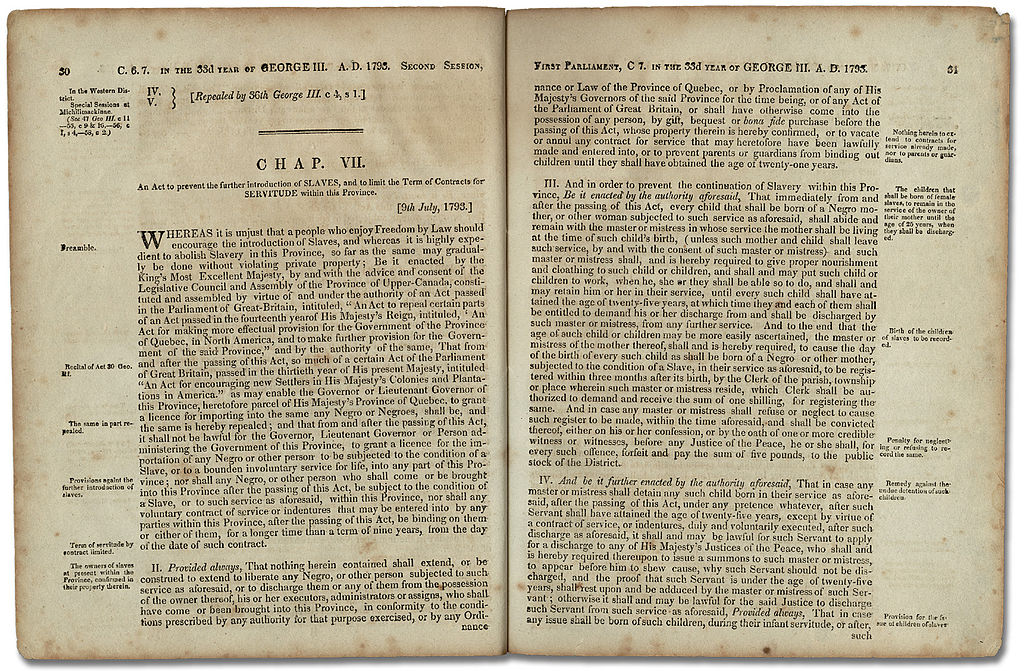 The Act Against Slavery, 1793 (Wikipedia)

Ontario slave owners opposed the enfranchisement of Black slaves. In Ontario the case of Chloe Cooley, is a sad example of entitlement. Chloe tried to escape an abusive owner, Sergeant Adam Vrooman. He had bound her in a boat in an attempt to take her to the State of New York, to sell her. She protested violently and the event, witnessed by William Grisley, led to the passage of the Act Against Slavery of 1793. On 14 March 1793, The event was reported to Lieutenant Governor of Upper Canada, John Graves Simcoe. However, Vrooman had not broken the law. Loyalists could bring their slaves to British North America. He also noted that in 1760, the French inhabitants of Lower Canada had been allowed to keep their slaves. Yet, despite the reluctance of the several representatives of the government of Upper Canada, the Act Against Slavery of 1793 was legislated.

Let us read the letter Sergeant Vrooman wrote to the authorities. He used the law to perpetuate an abuse. In this respect, his letter is a classic:

[…] been informed that an information had been lodged against him to the Attorney General relative to his proceedings in his Sale of said Negroe Woman; your Petitioner had received no information concerning the freedom of Slaves in this Province, except a report which prevailed among themselves, and if he has transgressed against the Laws of his Country by disposing of Property (which from the legality of the purchase from Benjamin Hardison) he naturally supposed to be his own, it was done without knowledge of any Law being in force to the contrary.
(See Chloe Cooley and the Act to Limit Slavery in Upper Canada. The Canadian Encyclopedia.)

Laws can be used to wrong a human being. In this respect, the fate of Chloe Clooney is a classic. In the eyes of slave-owning Loyalists, ownership had no limits. If so, what a nightmare for a woman.

The arrival of the Loyalists led to the Constitutional Act of 1791, which separated a large Quebec into Upper and Lower Canada. French-speaking Canadiens lived in Lower Canada, part of which was the Eastern Townships, given to Loyalists. I cannot make sense of the Constitutional Act of 1871. It received royal assent in June 1791 and it seems an attempt to assimilate French-speaking Canadians.

The Act to Limit Slavery in Upper Canada received royal assent on 9 July 1793, but in Upper Canada, slavery was not abolished until 1833. However, the Underground Railroad, helped slaves flee to Canada. United Empire Loyalists had taken their slaves with them, as property. But Blacks that escaped were no longer owned.

I will conclude here. We must introduce the Underground Railroad, an organization that helped Black Slaves flee to Canada. I am reading The Slave in Canada by William Renwick Riddell. It is an Internet Archive publication. I have looked for videos and saw one about the Royal Proclamation of 1763. It features a rush for land which is called freedom. It is as though the proclamation deprived the colonists of their freedom. Does freedom allow human beings to displace and destroy other human beings? An Aboriginal was not seen as a person, nor was a mortal whose colour was not white. I must close.

_______________
[1] “Under the terms of the Constitutional Act of 1791, the Eastern Townships were open to settlement and a land rush followed. Most of the 3,000 or so settlers came from the United States. A few were Loyalists, at least in spirit, but most simply wanted land and had no strong feeling about nationality. Many more immigrated from the British Isles, including Gaelic-speaking Scots.” (See Eastern Townships, Wikipedia)

2 thoughts on “The Blacks in Canada”