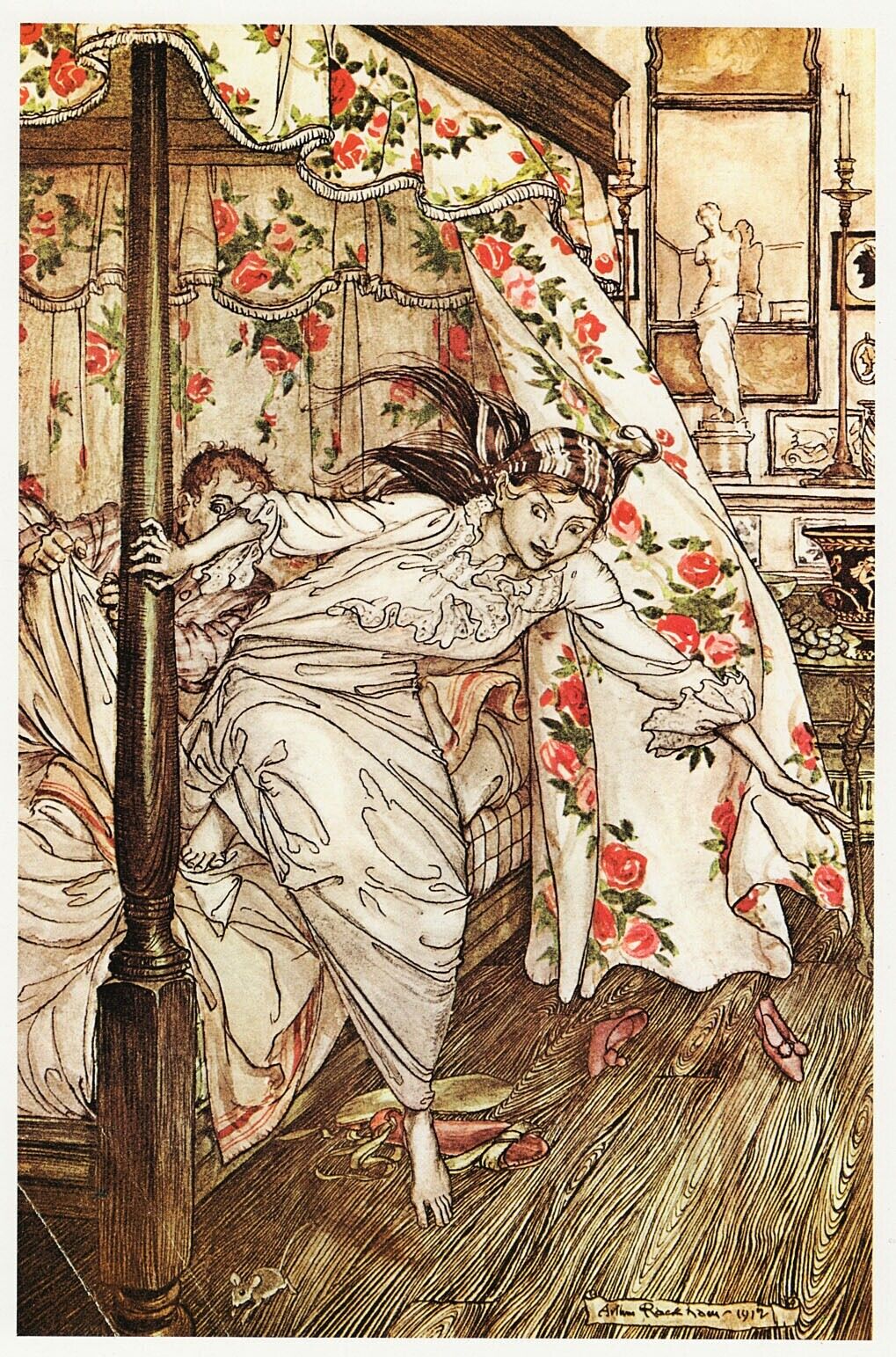 Æsop‘s Venus and the Cat by Arthur Rackham

Our next play is Molière‘s Amphitryon. In Amphitryon, we have people who look alike, which leads to cuckoldry. One character is named Sosie. In French, un sosie is a “dead ringer,” a look-alike. Amphitryon is cuckolded.

However, before going further, I should point out, once again, that, in Molière, people seldom change. One could not talk Argan (The Imaginary Invalid) into thinking he is perfectly healthy. In The Miser, Harpagon remains a miser. The young couples marry because Molière brings in a second father, a doubling, who recognizes his children, (an anagnorisis, or recognition scene). He pays for the weddings. In l’École des femmes (The School for Wives), Arnolphe is so afraid his wife will be unfaithful that he adopts Agnès and has her brought up so she will know as little as possible. However, Agnès’ father, Enrique, returns suddenly and unexpectedly, an anagnorisis. He and Oronte, Horace’s father, were planning for Agnès and Horace to marry.

Molière may also use a deus ex machina, which he does in Dom Juan. But Dom Juan is also “hoisted by his own petard,” a happy ending borrowed from the farce’s plot formula. Dom Juan will not be convinced that the freedom he gives himself will cause eternal damnation, which it does. He is a deceiver deceived, le trompeur trompé.

As for Psyché, Jupiter, the king of the gods, is a deus ex machina. Cupid cannot transform Psyché into a goddess because he is a lesser god. Venus could revive Psyché but she would not allow her son to marry a mortal. That would be a mésalliance. Therefore, Jupiter transforms a mortal being into an immortal, or a goddess. In Tartuffe, Orgon’s family would be ruined if a prince did not intervene. The prince, “un prince ennemi de la fraude,” knows that Tartuffe is a criminal and, although Orgon has given Tartuffe an incriminating cassette, a forgiving prince does not use it to Orgon’s detriment. Yet, to a large extent, Orgon is Tartuffe and Tartuffe is Orgon. Consequently, Tartuffe is a pharmakós.[1]

Given his theatrical, or formulaic, happy endings, Molière’s Weltanschauung (world view) resembles Jean de La Fontaine’s. A cat may be metamorphosed into a woman, but if the metamorphosed woman hears a mouse, she will jump out of bed and pursue the mouse. Therefore, in the 17th-century debate between nature & nurture, nature wins. (See The Cat and Venus.)

However, in 17th-century France, one could buy an office and become a bourgeois. Molière’s father was quite wealthy. So, in 1631, he bought an office for his son Jean-Baptiste. Poquelin would be “valet de chambre ordinaire et tapissier du Roi” (“valet of the King’s chamber and keeper of carpets and upholstery”). (See Molière, en-wikipedia.org). In 1641, Molière was, briefly, a valet de chambre ordinaire et tapissier du Roi, but he loved the theater, which led to his founding l’Illustre-Théâtre, on 30 June 1643. In August 1645, Jean-Baptiste Poquelin was imprisoned for bankruptcy. His father paid most of his debts,[2] La Troupe de Molière then left for the provinces and did not return to Paris until the late 1650s. As I mentioned in an earlier post, no one knows why Molière chose to call himself Molière. He never told. In 17th-century France, one could also become an honnête homme (a gentleman).

In short, Molière was a bourgeois and an honnête homme, but in his plays, usually comedic, nature is almost as implacable as tragedy’s destiny or fate. Dénouements, the deus ex machina especially, are “theatrical,” or formulaic. For instance, Molière may use a farcical plot formula in comedies moliéristes have called grandes comédies, thereby blurring the difference between his farces and grandes comédies. We are centuries away from existentialism.

My related article is particularly useful and more complete. I am updating my La Fontaine page, because the site officiel has been modified, for the better.