Our dramatis personæ is:

Helping Lucile, l’ingénue, is Nicole, a saucy servant. Helping Cléonte, the jeune premier, is Covielle, a valet. In some comedies, the young lovers are helpless and would never marry, were it not for the stratagems or their valets and servants. In the commedia dell’arte, zanni are very clever. They are tricksters. Covielle may not be a Brighella, but he devises the turquerie that fools our would-be gentleman, Monsieur Jourdain. Cléonte plays along.

Monsieur Jourdain believes one can learn gentilhommerie and hires a group of maîtres. The music and dance masters are the first to arrive at the bourgeois‘ house and mention that Monsieur Jourdain’ wish to be an aristocrat, provides them with a good income. The music master says:

However, the music master says that applause and praise do not necessarily bring money and that Monsieur Jourdain is in fact quite clever.

J’en demeure d’accord, et je les goûte comme vous. Il n’y a rien assurément qui chatouille [tickles] davantage que les applaudissements que vous dites; mais cet encens ne fait pas vivre. (I. i, p. 2)
[ I agree, and I enjoy them as you do. There is surely nothing more agreeable than the applause you speak of; but that incense does not provide a living.] (I. 1)
Il a du discernement dans sa bourse. (I. i, p. 2)
[He has discernment in his purse. His praises are in cash, and this ignorant bourgeois is worth more to us, as you see, than the educated nobleman who introduced us here.] (I. 1)

In scene two, a musician sings a new song:

I languish night and day, my suffering is extreme Since to your control your lovely eyes subjected me; If you thus treat, fair Iris, those you love, Alas, how would you treat an enemy? (I. 2)

Monsieur Jourdain finds the song a “little mournful” (lugubre) He proposes a song that has a sheep in it: “Il y a du mouton dedans.”

I thought my Jeanneton As beautiful as sweet; I thought my Janneton Far sweeter than a sheep. Alas! Alas! She is a hundred times, A thousand times, more cruel Than tigers in the woods! (Monsieur Jourdain sings, I. 2) (I. ii, p. 4 FR)

His masters praise him, so he says that he knew “sans avoir appris la musique” (I. ii, p. 4) (“It’s without having learned music.” I. 2). It is always without his having learned, or because he does not want the lesson. 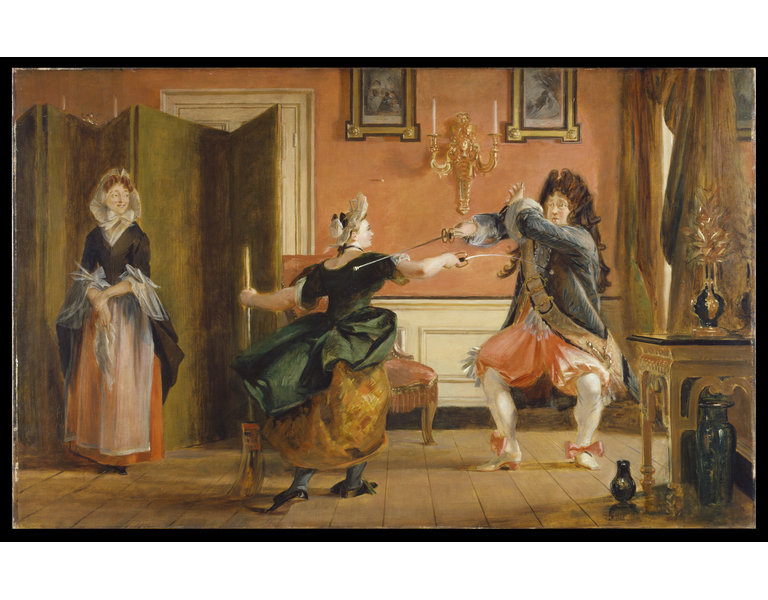 As I have told you, the entire secret of fencing lies in two things: to give and not to receive; and as I demonstrated to you the other day, it is impossible for you to receive, if you know how to turn your opponent’s sword from the line of your body. This depends solely on a slight movement of the wrist, either inward or outward.
(Fencing Master to Monsieur Jourdain, II. 2)

In this way then, a man, without courage, is sure to kill his man and not be killed himself?
(Monsieur Jourdain to Fencing Master, II. 2)

I believe the image featured above shows a degree incompetence on the part of Monsieur Jourdain. One of his legs should be behind him, so he can pull himself away, and one ahead, so he can attack. That is how he will “kill his man and not be killed.”

His philosophy master wants to know whether Monsieur Jourdain wishes to learn morale, among other subjects. Monsieur Jourdain enquires: “Qu’est-ce qu’elle dit cette morale?” (What does this morale say?) When the philosophy master tells him that it “teaches men to moderate their passions,” he stops the master: “No, let’s leave that. I’m as choleric as all the devils and there’s no morality that sticks, I want to be as full of anger as I want whenever I like.” (“Non, laissons cela. Je suis bilieux comme tous les diables; et il n’y a morale qui tienne, je me veux mettre en colère tout mon soûl, quand il m’en prend envie.” (II. iv, p. 14 FR ; II. 4 EN)

First, Monsieur Jourdain’s philosophy master teaches Monsieur Jourdain the difference between prose and verse. He learns that he has spoken prose his entire life and was never told. But he knew prose. He knew it without instruction.

[By my faith! For more than forty years I have been speaking prose without knowing anything about it, and I am much obliged to you for having taught me that.]
(Monsieur Jourdain to his philosopher master, II. 4)

Monsieur Jourdain has been mentioning a Marchioness. So he asks his maître de philosophie to teach him how to phrase: “Beautiful marchioness, your lovely eyes make me die of love.” (“Marquise, vos beaux yeux me font mourir d’amour.”) Monsieur Jourdain’s philosophy master moves the words around:

Before the arrival of the fencing master, the maîtres quarrel. All believe that their skill is the superior skill. A tailor has also visited. Monsieur Jourdain is “decked out.” He says, however, that his shoes hurt him but he is told, peremptorily, that they don’t.

Nicole, the maid, and Madame Jourdain, our bourgeois’ “sensible” wife, make fun of Monsieur Jourdain’s craze for aristocracy… Madame Jourdain wants a faithful husband, Nicole will not have these people mess up the house. Finally, Cléonte is angry at Lucile because she ignored him when he bumped into her. Cléonte is resentful, and will not let Covielle talk him out of dépit amoureux (III. ix, p. 31 ; III. 9), until Covielle starts mentioning imperfections in Lucile. Cléonte disagrees. He loves Lucile and would die for her. A lover is as The Misanthrope‘s Éliante says in her tirade. He loves “even the faults of her whom he admires.” (II. iv, 711-730, pp. 30-31; II. 5)

Madame Jourdain wants Lucile to marry a bourgeois, Cléonte, not Dorante. Bourgeois have money, but Dorante is borrowing money…  Under Louis XIV, aristocrats had to be seen. So they maintained homes, carriages, etc. in Paris. They sought the privilege of seeing Louis rise and Louis go to bed: le grand lever, le petit lever, le grand coucher, le petit coucher. (See Levée [ceremony], Wiki2. org.) Few could sit on a bench, usually an ottoman, the only seats available. Moreover, Madame Jourdain will not be humiliated. George Dandin is humiliated. When she learns Lucile is marrying the Grand Turc‘s son, Madame Jourdain is alarmed, but Covielle reassures her.

All’s well that ends well. Lucile and Cléonte marry and so do Dorimène and Dorante. Monsieur Jourdain is perfectly happy as a mamamouchi. I doubt that Dorante will pay his debt. He needed money to court the Marchioness, and Monsieur Jourdain loaned him the money he required. Dorante did not intend to marry Lucile.

No one can change Monsieur Jourdain, so a mere disguise allows the young lovers, Lucile and Cléonte to marry, with Madame Jourdain’s blessing. Besides, although his masters are at times ridiculous, the questions are asked by Monsieur Jourdain and Monsieur Jourdain is the person who answers. The philosophy master is not ridiculed. In fact, Monsieur Jourdain has been generous with his masters and it appears that as a veuve, a widow, Dorimène is quite capable of looking after Dorante, who seems an impoverished gentleman.

Attending a good performance of Le Bourgeois Gentilhomme will delight an audience, but one can also read Molière. There is a sense in which Molière is in the words and in the dialogues. For instance, the masters quarrel, but it is among themselves, which is revealing. Monsieur Jourdain does not participate in the quarrel. He says little more than: Doucement (softly), Tout beau (all’s well), De grâce (for pity’s sake) and Je vous en prie (I beg you), but the maître de philosophie arrives “just in time” to relieve Monsieur Jourdain :

It’s been a long day. We now make dinner.