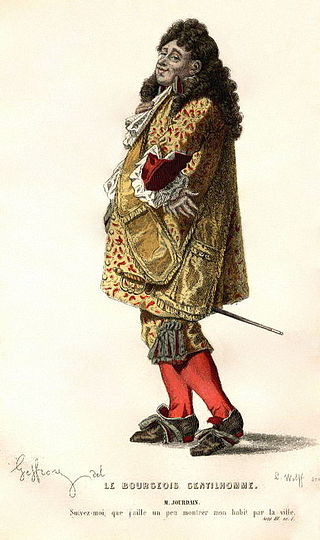 Molière‘s Le Bourgeois Gentilhomme premièred at Chambord, a Loire château, on 14 October 1670. It was performed as a divertissement du Roi, entertainment for the King.  On 23 November it was performed in Paris, at the Théâtre du Palais-Royal.

Le Bourgeois gentilhomme is a five-act comédie-ballet written in prose rather than the twelve-syllable or pieds l’alexandrin, the ‘vers noble.’’ As we have seen, Dom Juan (1665) is also a comedy in five acts, a criterion for grandes comédies, but it is written in prose. So doubt lingers as to Dom Juan‘s status as a comedy. Is it or is it not a grande comédie? Doubt also lingers about L’Avare, The Miser. It could be argued that the use of prose in a five-act play is a dramatic device. Dom Juan is a serious play in need of comic relief. Incongruity and ambiquity are hallmarks of Molière’s comedies.

The Bourgeois Gentilhomme‘s plot is the usual blondin-berne-barbon (the young lover fools the old man), which is the Shakespearean “all’s well that ends well.” The young lovers are Cléonte and Lucile, Monsieur Jourdain’s daughter. Monsieur Jourdain is a blocking-character in that he is attempting to elevate himself from bourgeoisie to aristocratie and wants his daughter to marry an aristocrat. He is a domestic tyrant.

As you may recall, in 17th-century France, offices could be bought. In 1631, under Louis XIII, Molière’s father, Jean Poquelin, bought an office, “valet de chambre ordinaire et tapissier du roi” (valet of the King’s chamber and keeper of carpets and upholstery). It could have provided Molière with a comfortable living, had he not wanted to be a playwright and an actor. In other words, the sale of offices allowed members of the Third Estate to rise to prominence. Bourgeois, rich and powerful, were at court.

Monsieur Jourdain, our barbon, is not a gentilhomme; he is an enriched bourgeois attempting to become a gentilhomme. The title of Molière’s play is an oxymoron, a contradiction in terms, which differs little from grand seigneur méchant homme, in Dom Juan and, in The Misanthrope, the atrabilaire amoureux,[1] Alceste’s contrariness. Monsieur Jourdain could be described as a senex iratus, an alazṓn. The alazṓn, whether a miles gloriosus or a senex iratus is defined as “an impostor that sees himself as greater than he actually is.” Monsieur Jourdain is not a faux dévôt. He is a social climber.

Le Bourgeois Gentilhomme opposes the young lovers, Lucile and Cléonte, and Monsieur Jourdain, the alazṓn. Monsieur Jourdain wants his daughter to marry an aristocrat, but Covielle, Cléonte’s laquais, and Cléonte devise une comédie, a play within a play,[2] featuring fashionable Turks, une turquerie,[3] during which Lucile accepts to marry Cléonte, disguised as the son of the Grand Turc. Lucile realizes that the son of the Grand Turc is Cléonte in disguise, but mere appearances easily fool Monsieur Jourdain who has been made a Mamamouchi.

[3] In 1536, an alliance was established between Francis I of France and Suleiman the Magnificent. (See Franco-Ottoman Alliance, Wiki2.org).
Montesquieu wrote his Persian Letters (Lettres persanes) in 1721.
Rameau composed his Indes galantes, an Opéra-Ballet in 1735. One of its entrées is Le Turc généreux.

Our dramatis personæ is:

The scene is Monsieur Jourdain’s house in Paris.