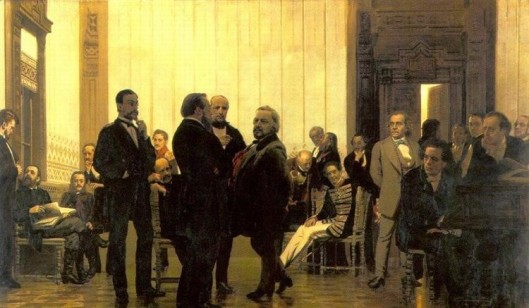 We have already seen the above image. It represents The Five  Slavophile composers, including their leader Mily Balakirev (1837 – 1910) and unidentified figures. The Five were: Mily Balakirev, Alexander Borodin, César Cui, Modest Mussorgsky, and Nikolai Rimski-Korsakov.

This post was to contain a discussion of the three gentlemen portrayed below, but I divided my subject matter, so that we would first be acquainted with changes brought about by The Five. How did they express an Eastern Russia? There had to be technical departures from traditional harmony and counterpoint.

It also seemed important to feature the music composed by Mily Balakirev, the rather troubled leader of The Five. Balakirev had a fine piano teacher in Karl Eisrach. Through Eisrach, he found a patron in count Alexander Ulybyshev, Alexandre Oulibicheff FR, and a kind predecessor in Mikhail Glinka. But Bakakirev was not born to a well-to-do family and, at times, he lacked tack. When the opportunity arose to work as a director of the Russian Musical Society (RMS), replacing Anton Rubinstein, his expressed preference for modern composers alienated Grand Duchess Elena Pavlovna, the conservative patron of the RMS. He was dismissed.

At any rate, when Pavel Mikhailovich Tretyakov started purchasing paintings from contemporary artists, he also called for portraits of eminent contemporaries. Ilya Repin heard the request and included the Slavic composers, The Five, several portraits of authors, Tolstoy in particular, and various prominent figures in the world of visual arts,  music, literature, or culture in general. Pavel Mikhailovich Tretyakov is the founder of the Tretyakov Gallery in Moscow, which he donated to the Russian nation in 1892.

I wanted to discuss the three gentleman featured at the centre of Ilya Repin’s Slavic Composers. The next post features Mikhail Glinka, a predecessor and collaborator to Mily Balakirev. In the middle, smoking a cigar, is Prince Vladimir Odoyevsky. Vladimir Odoyevsky was an aficionado of Gothic fiction, a music critic, and more. He published The Living Corpse, in 1844. 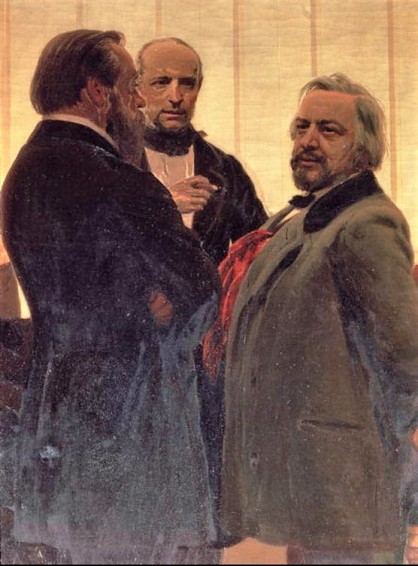 Portrait of (left to right) Balakirev,  Vladimir Odoyevsky and  Mikhail Glinka by Ilya Repin. The painting is somewhat anachronistic – Balakirev is depicted as a man approaching middle age, with a full beard; however, Glinka died in 1857, when Balakirev was only 20 years old. (Balakirev, Wiki2.org.)

One may skip the technical information.

The following are useful sites: Diatonic and Chromatic scales (Wiki2.org, and Chords, Wiki2.org.)

The C major heptatonic (7) scale consists of two identical tetrachords (4) c-d-e-f and g-a-b-c. A tone separates c & d, but e & f are placed next to one another on a keyboard. They are a semitone. C major has no sharps ♯ or flats ♭. On a keyboard, it is played entirely on the seven white keys. The second tetrachord, g-a-b-c-, is the beginning of the following scale in one sharp ♯.  The scale following C major is G major (f ♯ ).  It starts on the dominant (5th degree) of  C major. These scales contain sharps (♯).

There are seven ♯ and seven ♭.

The A minor scale

Each major key has a relative minor key located a tone and a half lower than its relative major key. Students play the A harmonic minor scale, but there are a natural A minor scale and a melodic A minor scale.

The Five did not hesitate to use different scales, such as whole-tone scales and other scales. The did so systematically. Whole-tone scales consist of full-steps (tones rather than semitones). European and Russian composers started to experiment with new scales. Whole tones had been used in Western music, but not systematically. To know changes made by The Five, see their Wiki2.org entry. 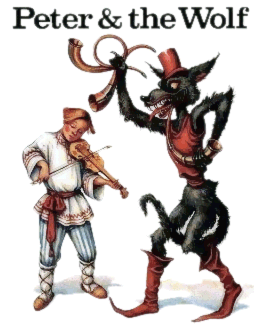 After The Five, several scales would be developed: octatonic, pentatonic, twelve-tone technique… Inspired by The Five, European and Russian composers started using other scales or made change to certain degrees of scales: major, minor, sharp and flat. The Five exerted enormous influence on Western composers: Maurice Ravel, Olivier Messiaen, Claude Debussy, and Russian composers. Maurice Ravel arranged Modest Mussorgsky’s Pictures at an Exhibition, a remembrance of Viktor Hartmann 🎶(Viktor Hartmann) ten suites for the piano, for an orchestra. Paul Dukas’ L’Apprenti-sorcier 🎶(The Sorcerer’s Apprentice) is “Russian.” French composer Hector Berlioz has been looked upon as a precursor of Russian music. Sergei Prokofiev‘s Peter and the Wolf 🎶is a delightful Russian composition.

New scales do not necessarily yield better compositions. I have often run back to Tomás Luis de Victoria.

Mily Balakirev’s Islamey, an Oriental Fantasy is western music with departures that give pieces Slavic flavour. It is a very difficult to play. To make it simpler, or more difficult, one may use and ossia, an alternative rewriting. The word ossia (ou soit; or else) is associated with Balakirev’s Islamey.

However, consummate virtuoso pianists, such as Franz Liszt (1811 – 1886) and Vladimir Horowitz (1903 – 1989) could play such pieces without encountering difficulties. We will listen to Horowitz’s interpretation.

Love to everyone 💕
I apologize for the delay. It’s bronchitis. I cannot speak. 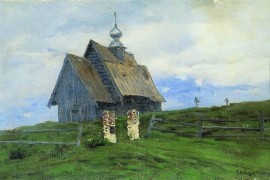 The Church in Plyos by Isaac Levitan, 1888 (Wikiart.org.)

19 thoughts on “On Mily Balakirev, not to mention all the scales”