Painting of the Battle of Valmy by Horace Vernet from 1826. The white-uniformed infantry to the right are regulars while the blue-coated ranks to the left represent the citizen volunteers of 1791. (Caption and photo credit: Wikipedia)

On 25 July 1792, the Duke of Brunswick threatened to harm the French, should its Royal family be harmed. He attacked France on 20 September 1792, but he was defeated at Battle of Valmy. On 22 September 1792, France was a Republic. 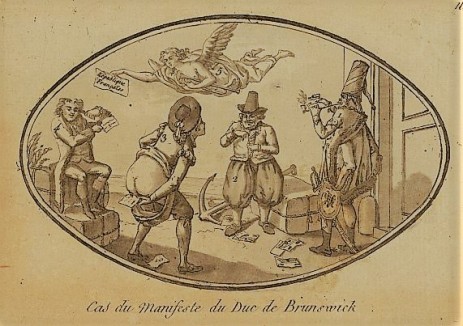 Anonymous caricature depicting the treatment given to the Brunswick Manifesto by the French population (Photo credit: Wikipedia)

The September Massacres (2 – 7 September 1792), which occurred more than a year after the flight to Varennes (20–21 June 1791), also reflected fear of an invasion. Although the French mocked the Brunswick Manifesto, the revolutionaries ordered the slaughter of prisoners, to prevent their joining an invading army. In Paris, some 1 200 to 1 400 prisoners were killed including 233 nonjuring Catholic priests, priests who would not submit to the Civil Constitution of the Clergy.

On 20 April on 1792, France’s Legislative Assembly declared war on Austria. In other words, there were Revolutionary Wars. The Battle of Valmy, a defeat for the Duke of Brunswick, is also labelled the War of the First the Coalition. The coalition would fight Napoleon Bonaparte until 1815. (See French Revolutionary Wars, Wikipedia.)

The French Revolution includes armed conflicts. The end of the Revolution overlaps the Napoleonic Wars. In fact, the huge levée en masse (Mass conscription) occurred during the Terror. Levées en masse would give Bonaparte his grande armée.

What happened to the ideals of the Age of Enlightenment? The philosophes had envisaged a Constitutional Monarchy, not regicide, nor war, nor a self-proclaimed Emperor.  Napoleon wanted to conquer, at any cost. Talleyrand[1] once took him to a battlefield where thousands were dead or dying, but Napoleon expressed no compassion.

And what happened to the sans-culottes (without knee breeches)? The sans-culottes wore un pantalon or trousers and had supported the goals of the philosophes. They turned into a mob.

In fact, what happened to Robespierre, “l‘Incorruptible” (The Incorruptible)? Could it be that Louis XVI was too weak? L’abbé Sieyès, who championed greater political power for the bourgeoisie, had to flee, or die. He was a priest.

There are times when everything goes wrong. How can one explain that Donald Trump was elected to the Presidency of the United States? As for the French Revolution, we know the causes, but how can we make sense of the Reign of Terror?

Apologies. I pressed on the publish button accidentally and too soon.

Two lines, written by poet Louis Aragon, keep coming to my mind. They are part of a poem set to music by the legendary Léo Ferré, entitled Est-ce ainsi que les hommes vivent? (Is this how humans live?). But the interpretation I know best is Yves Montand‘s (please click on Yves Montand’s name to hear the song).