This lovely historiated initial, shows France’s three classes. Not only did the third estate, le Tiers État, work, but it also paid the taxes that supported the clergy, the first estate, and the nobility, the second estate. During the last quarter of the 18th-century, France was near bankrupcy, mostly because of its recent financial contribution to North-American colonists seeking independence from Britain.

France could have helped the North-American colonists, but absolutism and Louis XV’s profligacy had strained and humiliated France. In 1763, it lost New France.

In 1787, Charles-Alexandre de Calonne, the controller-general of finances, asked Louis XVI to summon an Assembly of Notables, members of which Calonne hand-picked. Charles-Alexandre de Calonne did not think that his plan, the taxation of the property of nobles and clergy, would be approved by the Parlement of Paris. His predecessors had failed in this regard. The Assembly of Notables refused Calonne’s proposal and Louis XVI dismissed his controller-general of finances. Calonne had to flee to England.

Charles-Alexandre de Calonne had also suggested that Louis XVI convene the Estates-General. Louis XVI did not do so until 1789. They first met on 5 May 1789.

One morning, Louis XVI had the doors to the room where he met delegates locked. Delegates repaired to an indoor tennis court where they swore

not to separate, and to reassemble wherever circumstances require, until the constitution of the kingdom is established and affirmed on solid foundations. Such was the ‘spirit’ of the Revolution.

The French Revolution had begun. Feudalism, in France, was abolished on 4 August 1789. 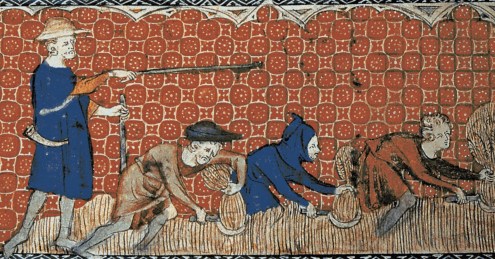 4 thoughts on “Cleric, Knight and Workman”