“Les Deux Pigeons,” a fable by Jean de La Fontaine finds its source in The Fables of Bidpai, Les Fables de Pilpay ou la Conduite des Rois. As we have seen in other posts, after publishing his first volume (recueil) of fables, based on Æsop’s Fables, La Fontaine drew much of his material from Gilbert Gaulmin’s Livre des lumières ou la conduite des roys, a translation of Bidpai’s Fables, published in 1644. These tales are rooted in the Sanskrit  Panchatantra (300 BCE) and were translated from Middle Persian into Arabic by Ibn al-Muqaffa’, at which point they became The Tales of Kalīla wa Dimna.

These works feature a story teller (Pilpay or Bidpai). They are frame stories. The characters are animals and the stories are told by a story teller, not the author. Such a structure serves two purposes. First, it engages the reader by leading him or her to a storyteller: Pilpay. It is as though the author stepped aside spelling a cast. Second, Pilpay’s characters are animals, whose eloquence is based on silence. Animals do not speak. They may say nearly everything. This literary device is often called obliqueness.

Interestingly, Montesquieu’s Persian Letters, 1721, Les Lettres persanes, feature Usbek and Rica, Persian noblemen visiting France. Their comments are the comments of strangers. As such, they may be dismissed, freeing the author to be critical of the land he inhabits, but in a discreet manner and with impunity.

Whatever the origin of Les Deux Pigeons, the lines I have quoted have no source other than the poet’s soul. La Fontaine gives his two pigeons/doves fine advice: be everything unto one another. There’s always a person who makes all the difference and whom we must always cherish. 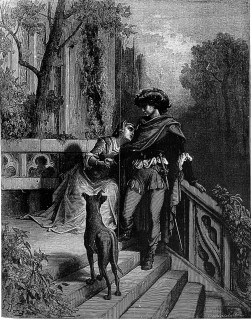