Signing of the Treaty of Ghent. The leading British delegate Baron Gambier is shaking hands with the American leader John Quincy Adams. The British Undersecretary of State for War and the Colonies, Henry Goulburn, is carrying a red folder. (Photo credit: Wikipedia)

My post entitled Louis Riel, hero or rebel (20 March 2018) was very long, too long. I  will mention the settlement of the Red River Colony by the Earl of Selkirk, but the details will constitute a separate post.

I had researched material concerning the voyageurs in a series of six posts published in 2012. I had also written posts mentioning the Treaty of Ghent, In 1814, a border between the future Canada and the United States was drawn. The Treaty of Ghent ended the War of 1812. As for the Pemmican War, they opposed voyageurs from the Hudson’s Bay Company (established in 1670) and voyageurs North West Company, established in 1789, with headquarters in Montreal. Two voyageurs posts feature Gabriel Franchère and the men he took from New York to Fort Astoria, located in present-day Oregon. Franchère was in the employ of John Jacob Astor‘s Pacific Fur Company and the earlier American Fur Company, incorporated in 1808. John Jacob was allowed to hire Canadiens voyageurs despite the Embargo Act of 1807.  Moreover, following the Treaty of Ghent, fur trading posts that had been British became American fur trading posts. Gabriel Franchère, a clerk and trusted employee of John Jacob Astor’s lived in Minnesota.

However, earlier posts do not refer to certain events that followed Louis Riel’s death. For instance, the population of Canada West had been Catholic and Anglican. Matters changed as Canada moved westward. The purchase of Rupert’s Land gave Canada the territory it needed and the Orange Order opposed the arrival of French Canadians in Ontario. At this point, we have the “School Questions:” the Ontario Schools Questions; the Manitoba Schools Question, and the New Brunswick Schools Question. I wonder if, and to what extent, French-Canadian habitants tried to move to Ontario and provinces west of Ontario.

Nearly a million French Canadians moved to the United States. That episode of Canada’s history is called the exodus. Protestants in New France had also fled to the Thirteen Colonies after the revocation of the Edict of Nantes. New France was a province of France.

Reign of Louis XIV of France. French Huguenots arriving in Dover (England) after the Revocation of the Edict of Nantes. In 1685. Coloured engraving.
January 01, 1900 (Photo credit: Getty Images) 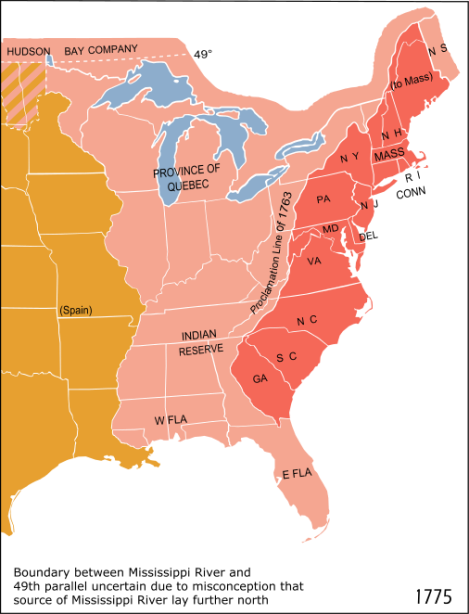 Thirteen Colonies (dark pink). Louisiana is situated on the left side. It belonged to Spain in 1775, but was mostly a French colony. (Photo credit: Wikipedia)

2 thoughts on “The Voyageurs, continued”