Shah Abbas I of Persia with a boy by Muhammad Qasim, 1627. (Photo credit: Wikipedia)

A controversy has arisen in British Columbia, Canada. A programme called SOGI (Sexual Orientation and Gender Identity) is now part of the curriculum and its purpose is to promote an acceptance of a sexual orientation that differs from heterosexuality, and to protect transgender individuals.

Most of us are heterosexuals. We engage in sexual intimacy with a person whose sexuality is different. Men and women make love, which is how humanity perpetuates itself. But sexuality is diverse, and children should know. The difficulty is not necessarily the subject matter, but the way in which children learn that there are differences in sexuality and that some men are born inside the body of a woman and some women, inside the body of a man. This is a subject some teachers may not be able to teach because they are insufficiently informed or are themselves intolerant of diversity in human sexuality.

I was not familiar with SOGI, but someone sent me an email inviting me to look at a Facebook page, which I did. I therefore watched an American news broadcast where SOGI, a Canadian programme, was looked upon as potentially destructive. A human sexuality programme need not be destructive. For example, given entrenched prejudices, it may be difficult for a homosexual adolescent to accept his or her sexual orientation. In this regard, SOGI can be helpful. Our adolescent, gay or lesbian, may feel better about accept his or her sexuality.

So, although children cannot choose their sexual orientation, there is no room in Canadian classrooms for exhibitionism. In other words, exposing children, particularly small children, to readings by a drag queen whose appearance is frightening cannot be very constructive. It is a sensationalized depiction of homosexuality. (See Sensationalism, Wikipedia.) Therefore, I cannot applaud the producers of the news broadcast presented below:

I researched SOGI which led me to an article published in Toronto’s Globe and Mail. Human sexuality is a subject matter that may be poorly taught and taught by biased teachers, but it is consistent with Canada’s anti-bullying legislation, and bullying is a form of behaviour that must be discouraged, as it is a form of hatred and may lead a child or adolescent to commit suicide. Canadian children are being asked to respect “sexual” otherness (sexual orientation and gender identity) as well as other forms of “otherness:” nationality, colour, language, stammering, disabilities, etc. This cannot be achieved if teachers are themselves intolerant and teach in a manner that reinforces rather than reduces prejudicial and, at times, criminal behaviour. Children can be cruel.

The Globe and Mail reported that a father (shown below) was afraid to take his fifteen-year-old transgender offspring to school, because the child could face bullying. At the age of 15, a child has usually entered adolescence, and, in the hands of adolescent bullies, a transgender child could indeed be at risk.

Bullying varies from school to school, but if a school has a significant number of bullies, a transgender child may indeed be entering an unsafe environment, hence the legitimate fears of a father (shown below) and the relevance of anti-bullying legislation and SOGI. 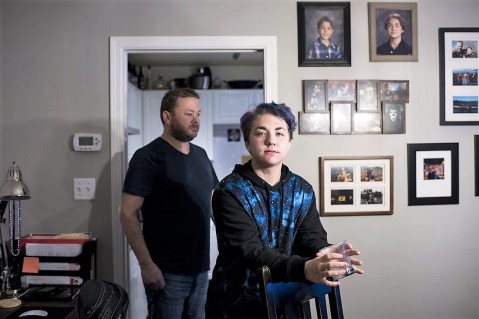 Cole, 15, with his father, Brad Dirks, prepares to head off to school in Langley, B.C. on Oct. 20. Brad has been supportive of programs that help transgender students find acceptance at school.
JIMMY JEONG/THE GLOBE AND MAIL

Given the purpose of SOGI, which is acceptance of difference, of otherness, a description of heterosexuality and homosexuality need not be too graphic and detailed. It may suffice to point to the heterosexual–homosexual continuum, which admits diversity in sexual orientation.

Along with bisexuality and heterosexuality, homosexuality is one of the three main categories of sexual orientation within the heterosexual–homosexual continuum.

Scientific research has shown that homosexuality is a normal and natural variation in human sexuality. (See Homosexuality, Wikipedia.)

If a presentation of human sexuality is too detailed and too graphic, small children could feel perturbed. Age matters. If age didn’t matter, pederasty (pedophilia) may be looked upon as acceptable, which it was in ancient Greece, but is no longer. However, it seems appropriate to tell children that some people differ from “Mummy” and “Daddy,” who are heterosexuals.

Sexuality as a choice

According to most experts, human beings do not choose their sexual orientation. In other words, sexual orientation is not learned. (See Social Learning Theory, Wikipedia.)  A little discretion is necessary, whatever one’s sexual orientation. In some cases, there is no choice other than repressing one’s sexual urges. Pedophilia is abusive. There is an age of consent. But the fact remains that a child’s sexuality is determined in very early childhood and that some children are born into the wrong body, which is the plight of transgender people. 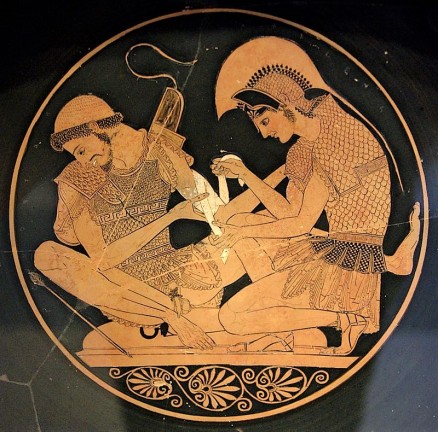 However, ancient Greece is not present-day Greece. Although pedophiles, or pædophiles, do not choose to be pedophiles or pederasts, in most societies, pedophilia is looked upon as sexual abuse. An adult male cannot force a younger male, a child, to engage in sexual activity. Nor, for that matter, should an older male assault a young girl. In fact, no one should force another person into sexual intercourse or a pregnancy. Sexual exchanges must be consensual and pregnancies are far too invasive to be coerced.

Allow me to conclude poetically. Metamorphoses were a favourite subject matter in Greco-Roman antiquity. Few books have been as influential as Roman poet’s Ovid (20 March 43 BCE – CE 17/18) Metamorphoses. Roman novelist Lucius Apuleius (c. 124 – c. 170 CE) also wrote a Metamorphoses, a picaresque novel entitled the The Golden Ass,  based on a Greek narrative. Lucius wished to be transformed into a bird, but he was mistakenly transformed into an ass. The Golden Ass contains in-set tales, one of which is the story of Cupid and Psyche, a tale we are familiar with.

Poet Ovid wrote that the son of Greek mythology’s Aphrodite (Venus in Rome) and Hermes prayed to a god asking to be forever united with water nymph or naiad, Salmacis. As Hermaphroditus, he was both a female and a male. The combination of male and female genital attributes is called androgyny.

We all share male and female attributes, to a greater or lesser extent. Men and women befriend one another. It seems therefore that we need to emphasize the notion of a  heterosexual–homosexual continuum. 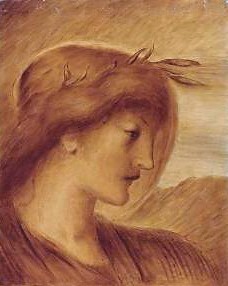 7 thoughts on “SOGI as anti-bullying legislation”