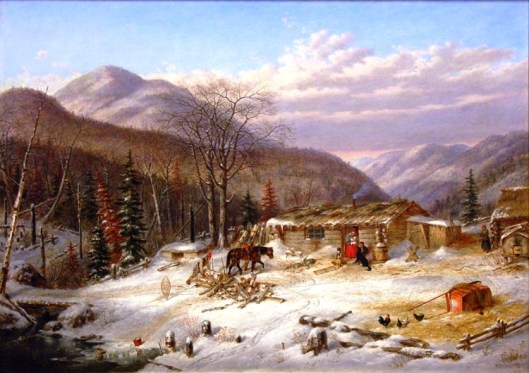 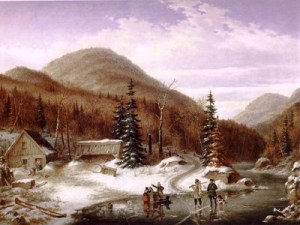 I published this article on 21st December 2013. My next post would be difficult to understand without the information provided in my earlier post and another earlier post.

We are still in Lower Canada or Bas-Canada. * “Lower” means down the St. Lawrence river, closer to the Atlantic Ocean.  Our images are by Cornelius Krieghoff (19 June 1815 – 8 April 1872) who arrived in New York in 1836, immediately after completing his studies. Although Krieghoff had a brother in Toronto, Canada, but he settled in the province of Quebec.

However, we are also reading excerpts from French political thinker and historian  Alexis de Tocqueville (29 July 1805 – 16 April 1859), whose two-volume Democracy in America, published in 1835 and 1840, depicts America as it was and, to a large extent, as it has remained: materialistic and much too individualistic.

In 1831, Alexis de Tocqueville and Gustave de Beaumont (6 February 1802 – 30 March 1866), a magistrate and prison reformer, had travelled to North America in order to write a report on prisons in America, which they did. 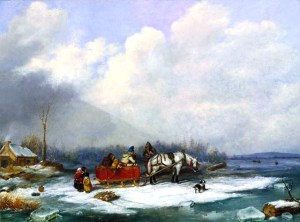 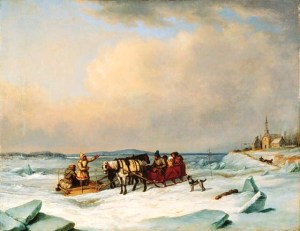 The Ice Bridge at Longue-Pointe by Cornelius Krieghoff, 1847-1848 (National Gallery of Canada)

“The French nation has been preserved there.  As a result, one can observe the customs and the language spoken during Louis XIV’s reign.” (Note 2)[ii] (Corbo’s translation)

In a letter to his mother, dated 7 September 1831, Tocqueville writes that: “not even six months ago, [he] believed, like everyone else, that Canada had become thoroughly English.” (Corbo’s translation)

“We felt like we were at home and everywhere people greeted us as one of their own, as descendants of ‘Old France’ as they called it.  But to me, it seems more like Old France lives on in Canada and that it is our country [France] which is the new one.”  Thus, Tocqueville was surprised by realities he discovered in Canada. Compared to his visits to other foreign countries, the visit to Lower Canada was a brief one. (Note 4) (Tocqueville & Corbo.)

The seigneurial system and Religion

He notes that the seigneurial system is, for the most part, a “formality,” and that Religion is central to the community.

“The seigneurial system, which would last until 1854, is more of a formality than anything else, even though it is a source of irritation for some.  But this does not keep the lands from being properly farmed or from prospering.  Religion is central to the community; the clergy holds an important place and proves to be unquestionably loyal to the British authority.” (Corbo)

The Wealth is under English Control

Even though the peasants are prosperous, the real wealth is in the hands of the country’s Englishmen.  The Mondelet brothers, who [sic] Tocqueville met in Montreal on August 24th, as well as the anonymous English merchant he met on August  26th, reveal to Tocqueville that, “almost all the wealth and commerce is under English control.”  On September 1st, Tocqueville confirms in his notes that “the English have control of all foreign trade and run domestic trade without any opposition.” (Note 7)[iv] (Corbo & Corbo’s translations)

Predominance of the English Language & Anglicisms

In both cities, “all the signs [enseignes] are in English and there are only two English theatres.” During his visit to the courthouse in Quebec City, Tocqueville observes the predominance of the English language and the mediocrity of the language of French-speaking lawyers, which is riddled with Anglicisms. (Note 8)[v] (Corbo.)

So, on 26 August, having visited the courthouse, Tocqueville comes to the conclusion that the French who live in the former New France are a conquered people and that it is an “irreversible tragedy.”

“I have never been more convinced than after I left the courthouse that the greatest and most irreversible tragedy for a people is to be conquered.” (Note 10)[vi] (Corbo’s translation) 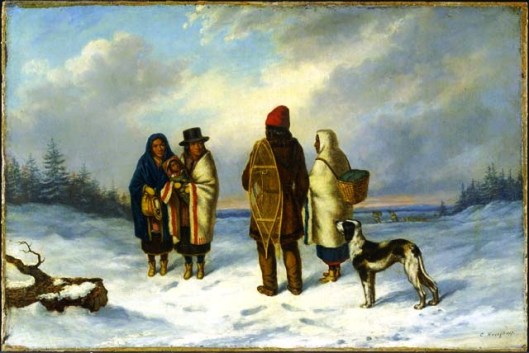 Indians at Snowy Landscape by Cornelius Krieghoff, c. 1847-1848 (The National Gallery of Canada)

Having expressed pleasure in finding that New France had become Old France, Tocqueville then fears for the future of the French nation he has visited.  He was right.  The French-Canadian habitant was still prosperous, but there did come a point when the thirty acres could no longer be divided.  In fiction as in history, regionalism died.  In his 1938 Trente Arpents, or Thirty Acres, Ringuet, the pseudonym used by Philippe Panneton, chronicled its passing away in a poignant manner.  The habitant had nowhere to go.  Nearly a million French-Canadians and Acadians left for the United States. 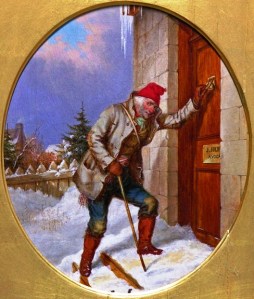 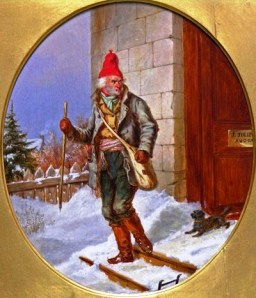 Our habitant says “For the love of God,” knocking at his lawyer’s door, and “Go to the Devil,” as he leaves.  He is wearing a hat called une tuque and his ceinture fléchée.

[i] Claude Corbo, in the Encyclopedia of French Cultural Heritage in North America.  As indicated, Corbo is at times the narrator and, at times, a translator.

The video has been removed.

The Valley of the Cariboo by Cornelius Krieghoff, 1856 (la Galerie Walter Klinkhoof)