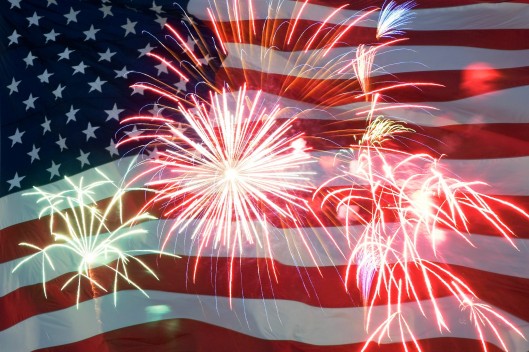 US Flag and Fireworks (Google images)

I missed July 4th, Independence Day for the citizens of the United States, but wish to send special greetings to my neighbours.  I spent several holidays at my grandfather’s house in Massachusetts. I grew to love his home and his land. The year is young, so greetings to everyone.

Life has not been easy for many of you since Mr Trump was elected to the presidency of the United States. You have had to rely on courts to block some Executive Orders. These are your courts and they represent you, your vision, your values. Many Americans would keep law-abiding “dreamers,” rather than deport them.

The children of undocumented immigrants may be safe. Their parents, however, are being returned to an uncertain future and some may be executed because they have stood against a tyrant. Iraqi Christians are being deported. Yes, there are Christians in the Middle East, but fewer and fewer. As for Muslims, the majority are good persons who deserve respect and love.

A large number of nations are home to refugees whom they may deport. Countries have a right to limit immigration. However, one should consider the plight of immigrants and refugees and that of persons who may be deported to their native land. In Sweden, upon learning that they their family would be deported, the children of Russian refugees have fallen ill. It’s a strange disease. They do not die, but enter into a state of resignation so complete that they are neither dead nor alive. They lose consciousness. Such phenomena are difficult to explain, but these children may have felt, or feel, they were, and are, not worthy of living.

In Sweden, hundreds of refugee children have fallen unconscious after being informed that their families will be expelled from the …

Uppgivenhetssyndrom, or resignation syndrome, is said to exist only in Sweden, and only among refugees. The patients seem to have lost the will to live. “They are like Snow White,” a doctor said. “They just fall away from the world.” Photograph by Magnus Wennman for The New Yorker

Certain immigrants and asylum-seekers were not allowed to stay in the United States under former President Obama’s administration. But they were deported at a slower rate and in smaller numbers. We did not see “dreamers” cross the border and the cost of frozen limbs. No one can enter Canada illegally, but recent asylum seekers who arrived during winter months, were helped by the police and then arrested, but not in a brutal manner. Canada has to protect its citizens. It has immigration laws and it may deport would-be Canadians, rightly or wrongly.

Canada’s Armenian community sponsored at least one flight of threatened Armenians. These refugees were Christians as are Iraqis being deported from the United States. One may think the Armenians who were on that one flight to Canada were “lucky.” To a certain extent, they were. Members of Canada’s Armenian community felt relief and newly-arrived Armenians were greeted to this country. They had nevertheless lost their home and, perhaps, children and relatives. It has often been said, in France and Canada, that “nous sommes tous du pays de notre enfance.” We all belong to the country of our childhood. Immigrants lose their native land and some remember circumstances that were better in the country of their birth. History or destiny are not always kind to people. Most immigrants have to learn a new language and they may be underemployed in their new country, which may constitute a profound loss.

In this regard, we have learned that President Trump’s Islamophobia is selective. It does not include Saudi Arabia.

He could also be that he does not realize that there may be tragic consequences to his Islamophobia. For one thing, he may be cultivating terrorism. How long will Muslim migrants accept being looked upon as would-be terrorists on the basis of their religion? Think, moreover, of the copycat phenomenon. Think also that there is a degree of diversity in the Middle East. Although most citizens are Muslims, certain minorities were not “Arabised” in the 7th century CE. Some did not convert to Islam. For instance, there are Buddhists in Saudi Arabia. (See Buddhism in Saudi Arabia, Wikipedia.) Finally, deporting people who have grown roots in a country other than their native country may lead to an illness resembling the fate of those children in Sweden who have given up: uppgivenhetssyndrom.

War and terrorism have caused a large number of innocent people to walk away from their homes in the Middle East. It’s a crisis and such crises have happened before. We have to manage them.

Mr Trump is at the G20 Summit. It would appear he may be compromising the United States’ status as global leader. He is, at any rate, facing opposition. The climate, for instance, is a global issue and there are trading agreement, defence alliances and questions such as migration and various international accidents.

Greetings to all my Americans readers.

Although he was not reelected in 1958, his only political defeat, he did not leave Ottawa.  He worked instead as a special assistant and consultant on economic affairs for the Right Honourable Lester B. Pearson, a Nobel Laureate.

Under Louis St. Laurent, Canada had begun putting into place social programs that would protect Canadians.  For Mr MacEachen, this endeavour would culminate in the Medical Care Act, passed by Parliament in 1966, when Mr MacEachen served as Minister of National Health and Welfare (1965-1968).  The implementation of Medicare was a major victory for Mr MacEachen and an enormous gift to Canadians.  It was, in fact, a major historical moment. A nation was born.

Very few persons could have been as dedicated as Mr MacEachen in his role as Canada’s Minister of National Health and Welfare. Mr MacEachen had worked as professor of Economics at St. Francis Xavier University, which is home to the world-renowned Coady International Institute, founded in 1959 and named after the Reverend Dr Moses Michael Coady, a coöperative entrepreneur who created the Antigonish Movement.  On 19 November 2009, during an interview with Steve Sutherland of the CBC (Canadian Broadcasting Corporation),  Mr MacEachen said he was a “disciple” of Father Coady who wanted to “enable people to get a vision of possibilities.  (StFX Digital Archives, Quotes by Rev. Dr. Moses Coady) ”

Moreover, Allan J. MacEachen was born in Inverness, Cape Breton, the son of a coal miner.  The coal miners of Cape Breton toiled painfully, and often died, reaping coal deep underground and bringing it to the surface. (Have you seen Margaret’s Museum, a 1995 British-Canadian film based on a story by Sheldon Currie, a former teacher at StFX?) When interviewed by Steve Sutherland of the CBC, Mr MacEachen said that the miners of Inverness were “poor” and, that, when they had to retire, they did not have a “pension.”  He had witnessed poverty.

The Honourable Allan J MacEachen studied at the Massachusetts Institute for Technology (MIT), and became a professor of Economics.  In his CBC interview, he said that people were not interested in what he knew.  They wanted to know what he could do for them. They had needs which he understood and he was in a position to help his nation.  He had the knowledge and the shrewdness to do so.

During the same interview, Mr MacEachen stated that, as a politician, he had learned that he had to “obey” his constituents.  He had learned to “listen” to the people, to “serve” them, and to “take Canada into account.”  That interview is a lesson in leadership and nationhood.  Mr MacEachen cared for the people, as should all elected officials.

Former US President Bill Clinton is a recent visitor to StFX University.  On 11 May 2011, President Clinton opened StFX University’s Frank McKenna Centre for Leadership.  That Centre has solid foundations.

For two decades, the Honourable Allan J. MacEachen was also my next-door neighbour in Antigonish, N. S. and a dear friend.  I am honoured to say that he remains a dear friend.