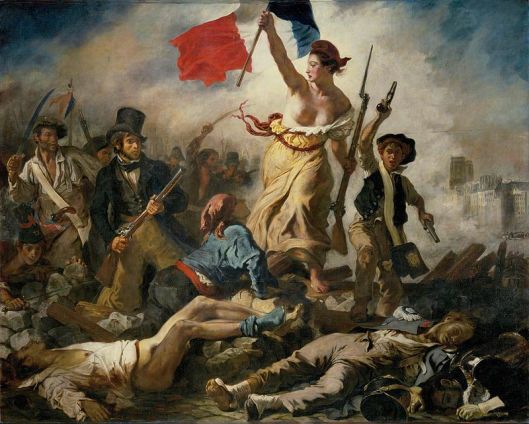 Above is Eugène Delacroix‘ Liberty leading the people. Eugène Delacroix is associated with Romanticism. He is, almost undoubtedly, the son of Charles Maurice de Talleyrand-Périgord, a brilliant aristocrat who survived the French Revolution, was Napoléon’s second-in-command, orchestrated his defeat at Waterloo, and fared well under Louis XVIII, the King of France from 1815 until 1830.

Sunday, April 23rd and in its last week of campaigning the contest is a toss-up. The race is coming down to four candidates – the far-right Marine Le Pen [Front National], the independent Emmanuel Macron, the centre-right François Fillon and the left-leaning Jean-Luc Mélenchon who has mounted a late-stage comeback to pull within striking distance of the other three.
Análises & Previsões – Blogs de Traders

As you have just read, last Sunday, it seemed that independent Emmanuel Macron would be the next President of France. Matters have changed. On Friday, 28 April 2017, Nicolas Dupont-Aignan, the President of far-right party Debout la France (Stand up France) reached an accord de gouvernement with Madame Le Pen. (See Le Monde.) Members of Madame Le Pen’s Front national could therefore be elected into office. My poor “douce France” (La Chanson de Roland)!

Members of Marine Le Pen’s Front national may have influenced the results of the Brexit referendum, held on 23 June 2016. The Brexit referendum did not indicate a clear willingness among Britons to sever their ties with the European Union. For all practical purposes, half of Britons voted in favour of leaving the EU, and the other half opposed a separation. The results were too close to be acceptable.

We, Canadians, are veterans in the murky territory of referendums. We’ve experienced a 49% versus 51% “victory.” We have therefore eliminated 50% referendums through the Clarity Act. Such 50% referendums show division and in the case of Brexit, a few voters feared the Migrants. That decision had to be “walked back.”

Since migrants began flooding Europe, nativists, i.e. the extreme right, have been given a voice. It is a repli sur soi. In other words, a number of Britons went into fetal position. And the United States elected Donald J. Trump. Britain is the former and foremost colonial power and the United States has welcomed several generations of immigrants from all over the world. It was a symbol of freedom.

At any rate, last Sunday, it seemed that independent Emmanuel Macron would be the next President of France. As you probably know, on Friday, 28 April 2017, Nicolas Dupont-Aignan, the President of far-right party Debout la France (Stand up France) reached an accord de gouvernement with Madame Le Pen, the leader of the Front national. (See Le Monde.) This partnership could result in a victory for Marine Le Pen’s Front national, and we could expect a purge, the return of the death penalty, no tolerance of “otherness.” In short, the Age of Enlightenment would seem an error, or a movement, a mere movement. Voltaire, Rousseau, Diderot, etc. never envisaged 1793, the “populist” Reign of Terror.

Although Madame Le Pen has avoided using the word Frexit recently, Frexit is on her agenda. Brexit was harmful, but Frexit could deal a death-blow to the European Union. Together, European nations are a force. If Frexit occurs, the European Union may be irreversibly weakened and peace in the world threatened. A United Europe is one of the conditions of global peace.

It other words, we cannot allow ISIL to rule the world. A victory based on a fear of terrorism would not be a victory. On the contrary, it would empower extremists, and extremism is always a mistake. One chooses a middle path, Molière’s “modération.”

Marine Le Pen came to Quebec thinking she would have an audience. Not at all! The Québécois birthrate is so low that we need immigrants and they are Canadians as soon as they arrive. The Quebec shooter (29 January 2017) was an admirer of Madame Le Pen and Donald Trump, the newly inaugurated President of the United States. The cost of housing is very high in Canada, but, if Quebec builds affordable homes and I have anything to do with the process, these homes will be for everyone.

At this point, Marine Le Pen has a chance of being elected to the presidency of France. She’s clever. People may believe she will protect them from terrorist attacks. No! Kindness, acceptance, humility and a smile go a very long way. I’ve inserted an Avaaz video. One has to click on Facebook if need be.