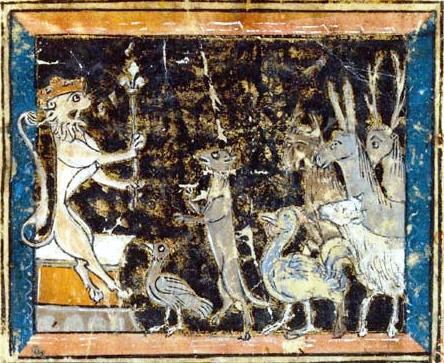 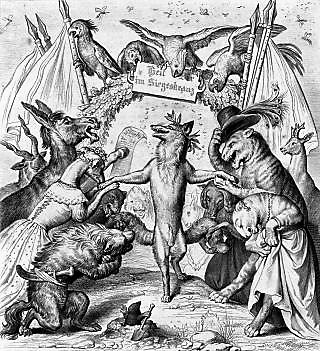 “Reynard” is a defining document of a vast tradition in Western art: the trickster story. Art and Picture Collection / The New York Public Library

You may wish to read Renart’s story in this fine article published by The New Yorker. Spelling Renart with a “d” is perfectly acceptable.

Finnish folklorist Antti Aarne  (5 December 1867 Pori – 2 February 1925 Helsinki)  was the first scholar to classify folktales. In the 19th century, an interest in folklore had developed. The search for folktales was in fact initiated by the Brothers Grimm who travelled throughout German-language states and collected its folklore. Germany had yet to be unified and folktales were seen as an expression of nationality and an element that could lead to nationhood. Nationalism is an ideology that dominated 19th-century Europe and it is associated with the development of folkloristics.

Prussian leader Otto von Bismarck “engineered a series of wars that unified the German states,” but he excluded Austria (see Otto von Bismarck, Wikipedia). In the early years of the 19th century, Madame de Staël had written De l’Allemagne, in which she described the people of German-language states. Germaine de Staël’s effort and enthusiasm were considerable encouragement to the Brothers Grimm.

In short, as nationalism developed, so did an interest in folklore: folktales in particular, which may explain why Antti Aarne’s started to classify folktales. He would be joined by American Stith Thompson (7 March 1885 – 10 January 1976). The Aarne-Thompson catalog was published in 1910 and was named the Motif-Index of Folk-Literature but, as Aarne-Thompson’s classification evolved, indexical units larger than motifs were used. Scholar Hans-Georg Üther refined Aarne-Thompson’s classification which is now entitled the Aarne-Thompson-Üther Classification Systems or Multilingual Folktale Database. However, motifs exist (see Motif [folkloristics]), as do narremes, the smallest meaningful units in a narrative (see Vladimir Propp, Wikipedia).

Three Motifs in Reynard the Fox

If you have read A. A. Milne‘s Winnie-the-Pooh (1926), you may remember that the little bear enters a house through an opening, but cannot get out through the same opening because he has eaten too much honey. We are entering the world of motifs. The Perry Index of Æsopic fables lists The Fox and the Weasle (24), La Fontaine’s “La Belette entrée dans un grenier” (The Weasel in a Granary) (III.17). In this fable, the Belette is too fat to leave the granary the way she entered it. As we have seen, Finnish scholar Antti Aarne‘s first classification of folktales was a motif-index.

The tail fisher or severed tail

Jean de La Fontaine, also told the sorry fate of a tailless fox in a fable entitled “Le Renart ayant la queue coupée,” The Fox with his Tail cut off (1.V.5). This tailless fox tries to persuade foxes in council to part with their own tail. He is asked to turn around so they can see what to expect. His mutilated body is repulsive, which could explain why foxes still have a tail. (Tailless Fox Tries in Vain to Get Foxes to Cut off Tails, ATU 64.)

We have also read a Cherokee fable entitled “How the Bear Lost its Tail,” a Cherokee Fable (4 August 2015). Recurrence is a precious tool in literary criticism. (How the bear lost his tail, ATU 2.)

GETTING CAUGHT IN A HOLE

When Ysengrin is away being turned into a monk, Renart rapes Hersent, the wolf Isengrin’s wife, when she is caught in a hole or aperture. Noble, the king, sends ambassadors to Maupertuis, Renart’s domain, but the fox plays tricks. For instance, Renart asks Brun / Bruin the bear to put his nose in a slit in a log claiming that Brun will find honey inside. Renart then removes the wedges holding the slit open. Villagers are converging so, in order to escape, Bruin loses the skin off his nose, which he would rather do than lose his life. He returns to court. Wedges can be called coins. When one is stuck, one is coincé. The English idiom “it’s no skin off my nose,” might find its source in this episode.

However, the main narrative is the rape of Hersent, Isengrin’s wife, and the trial that ensues. (Reynard the bear at court, ATU 53)

Reynard the Fox played a role in the development of European jurisprudence. Reynard the Fox is also associated with Machiavelli‘s Prince. If the end, which may be survival, justifies the means, one lies, rapes and murders. Renart feigns devotion. He is an ancestor to Molière’s Tartuffe, the ultimate casuiste, and has also been identified with Molière’s Dom Juan. The manner in which he talks himself out of a death sentence is pure hypocrisy, but it is also the plea of a brilliant lawyer. Before, he is hanged, the fox must atone. He resembles the fox in the Sick Lion tale who has also been on a pilgrimage, which explains his tardy arrival at the Lion’s court, Noble’s court.

This post is the second of two posts on Reynard the Fox. Given its subject matter, motifs, it can be published independently of the first post. Should you need further information, please use Joan Acocella’s article on Reynard the Fox. One cannot do better. The link to her article is immediately above this note. 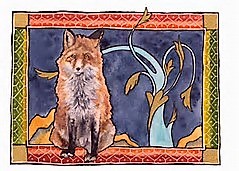