Secretary of State John Kerry on Wednesday, at the State Department (Photograph by Zach Gibson / Getty)

The Security Council Punch Knocks Netanyahu Down from Hubris to Humiliation

At the moment, I am completing a factual post about the 68-year old conflict between Israeli and Palestinians and the nearly 50-year old occupation of the Golan Heights by Israel. But I must first provide figures reflecting the assistance provided Israel by the United States.

Figures from another source are:

See Israel-Palestine Timeline: the Human Cost of the Conflict
http://israelpalestinetimeline.org/

On 23 December 2016, the United Nations Security Council condemned Israeli settlements on territory not belonging to Israel. The United States did not veto the vote. US Secretary of State John Kerry, addressed the State Department on 28 December 2016.

One may read the full text at:

In his address Mr Kerry stated that:

Israel’s permanent representative to the United Nations, who does not support a two-state solution, said after the vote last week, quote, “It was to be expected that Israel’s greatest ally would act in accordance with the values that we share,” and veto this resolution. I am compelled to respond today that the United States did, in fact, vote in accordance with our values, just as previous U.S. administrations have done at the Security Council before us.

My factual post on the Israel-Palestine conflict may not be published as it may be misinterpreted. But I will write the following.

In 132 CE, the remaining Jews, under Bar Kokhba, rebelled against Hadrian. In 135 CE, Hadrian’s army defeated the Jewish armies and Jewish independence was lost. As punishment, Hadrian exiled more Jews, sold them into slavery, changed the name of Jerusalem to Aelia Capitolina, turned it into a Roman pagan city and forbade the Jews from living there. Judea and Samaria were renamed by Hadrian to Syria Palaestina, after the Assyrians and Philistines respectively, both as an insult to the Jews and as a means of erasing the land’s Jewish identity.
(See Jewish Diaspora, Wikipedia.)

In the 7th century in particular, Arabs conquered territory spreading from Asia to the Iberian Peninsula. Islamisation continued under the Seljuq Turks. The Ottoman Empire was a large empire that included Palestine and nearly reached Vienna.

After the fall of Constantinople (1453), the capital of the Byzantine Empire, a large part of eastern Europe was conquered. The Ottomans were Turks, not Arabs. But they were and are Muslims. The genocide of Armenians was perpetrated under a Pan-Islamism ideology as the Ottoman Empire was about to fall. In 1916, the yet to be defeated Ottoman Empire was partitioned under the terms of the Sykes-Picot Agreement. Colonialism died a slow death. It lingers to this day.

At any rate, Britain France and the Russian Empire constituted the Triple Entente. They were the signatories of the Zykes-Picot-Agreement. However, although it agreed with the partitioning, Russia did not sign. The Russian Empire fell to the Bolsheviks and the Tsar’s family was executed on 17 July 1918. The last Tsar of Imperial Russia was Nicholas II.

Israel has occupied the Golan Heights since the Six-Day War (June 1967). After 50 years, it has yet to return it to its Arab owners (Syria, I believe). Israeli are still settling on territory located outside the borders of Israel which the United Nations Security Council condemned and the United States did not veto. Palestinians are being evicted to this day.

Many lies are circulating at the moment as well as unacceptable and false accusations. Our common goal should be peace in the Middle East. Eleven million individuals have left Syria and Iraq and 300,000 have died. Most are Muslims, but Christians celebrated Christmas in Aleppo. The United Nations Security Council’s resolution condemning Israeli settlements outside Israel was a call for peace.

Israel must become an instrument of peace. 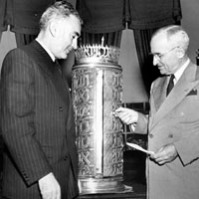