Vice President-elect Mike Pence asserted Tuesday night that the Trump administration will have an aggressive first 100 days in office that includes rebuilding the military, repealing Obamacare, and naming a justice to the Supreme Court.

The Indiana governor and former U.S. House member said he has visited Capitol Hill about the agenda and issued a warning to GOP lawmakers.

“I told my former colleagues to buckle up, vacation is over,” Pence said to laughter from the audience. 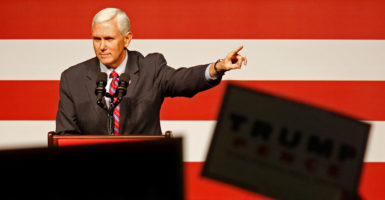 “I told my former colleagues to buckle up, vacation is over,” Vice President-elect Mike Pence, a former Indiana congressman, said at a Heritage Foundation event Tuesday. (Photo: Max Becherer/Polaris/Newscom)

Pence spoke Tuesday night at The Heritage Foundation’s President’s Club Meeting, held at the Trump International Hotel in Washington, D.C., in front of about 700 people in the large ballroom. His speech came just 44 days before Donald Trump is…