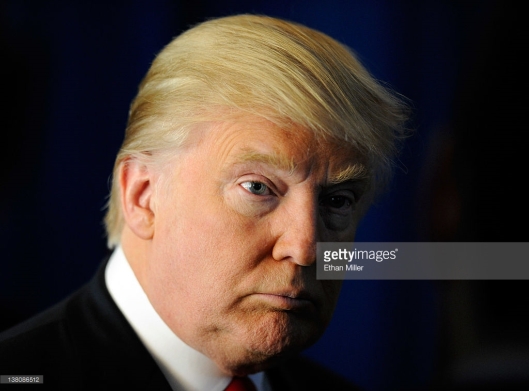 Donald Trump will not commit to accept election result

The photograph above was not taken during the third and final debate of the race to the presidency of the United States. During the third debate Mr Trump stated that he would simply look upon an unfavourable result as part of a great conspiracy. He will accept the result if he wins.

Such an answer suggests somewhat of a flaw in Mr Trump’s truly colourful personality. According to Mr Trump, victories and losses are the result of conspiracies. It follows that if American voters do not elect Mr Trump, they will have been indoctrinated by or fooled by conspirators.

Every four years, when an election takes place, it is “rigged.” If Mr Trump believes that elections are rigged, were Mr Trump to be elected to the presidency, theoretically, he would be yet another president whose election was rigged or pre-arranged. However, he, Mr Trump, is suggesting that he is a “promised” President and the only person to guide the nation. If defeated, he will not accept defeat.

In a democracy, the electorate choses one of two or more candidates on the basis of a clearly defined platform, i.e. a description of a candidate’s program, if elected. The duty of nominees—Mr Trump and Mrs Clinton are nominees—is to make his or her program clear to voters in as civil a manner as possible. Citizens of the United States choose their representatives by voting and every adult has the right to vote. This is what made America great. Its greatness does not lie in a vague past. It lies in a past that forged the country so its citizens could vote and their privacy would be protected. No, a politician cannot play doctor and dictate the quantity of painkillers will be administered to a patient. That would be called an intrusion. The US has its Drug Enforcement Administration.

An Assault on Democracy

1. Mr Trump assaulted women but did not know his actions constituted an assault.

2. Mr Trump also assaulted reason. In the matter of gun-control, he has suggested Mrs Clinton’s bodyguards be taken away from her. That would be called a “trumpism” and se tromper FR means to make a mistake and tromper means to deceive, not to be faithful, to fool. When discussing birth-control, he first stated that women who had undergone an abortion should be jailed. However, he is now saying that women get abortions “days before birth.” Doctors disagree, but do they even count, or common sense for that matter?

Although the child may be still-born, days before birth, one gives birth. A “trumpism” is a twisted way of not discussing the issues. The truth is that if a woman dies during childbirth and the baby is alive, his or her life will be saved. Mr Trump lives on another planet. As I noted above, it is for medical doctors, the experts, to make medical pronouncements.

On 8 November 2016, the citizens of the United States will exercise their right to vote and the result of the election will be respected. Americans will elect the nominee who is most likely to ensure their safety. That is the reason why they pay their taxes.

This has been the strangest political campaign.