In Molière’s comedies, the one fault that dooms a marriage or a possible marriage is jealousy. In this regard, Molière’s École des femmes is our most celebrated example. It was first performed on 26 December 1662 at the Palais-Royal. Molière’s troupe was at the time la Troupe de Monsieur, frère unique du Roi, the company of the Duke of Orleans, the only brother of Louis XIV. It is une grande comédie and it created a controversy. Molière response was in the form of a short play entitled: La Critique de l’École des femmes.

In Molière’s theatre, jealousy affects most barbons, because its stems from the same flaw in character that blinds Orgon and allows Tartuffe to dispossess Orgon’s family. French scholar Paul Bénichou has labelled this flaw a vanité inquiète, vanity combined with insecurity.[1] Were it not for Tartuffe, it would be difficult for Orgon to force his daughter Mariane to marry Tartuffe. Yet, Orgon would not take Tartuffe into his home if he did not wish to be a tyrant with impunity.

In the case of Arnolphe, fear of being cuckolded is an obsession and, as Chrysalde—the plays raisonneur—tells him, he should not laugh at those whose wives are not faithful because humans are at the mercy of destiny. Molière lived in the century that opposed casuistes and Jansenists. In the eyes of Jansenists, humans could not ensure their salvation.

Another French scholar, René Bray[2] entitled one of the chapters of his Molière, homme de théâtre (1954) Molière pense-t-il ? Molière theatre is rooted, first and foremost, in comedy, including farces and his own comedies. In earlier days, biography was used to “explain” Molière’s plays.

We cannot dismiss Zeitgeist, but it is important to study Molière using other criteria such as the dramatic structure of his plays, its “types,” and other organizing principles. According to Northrop Frye, one should study a work of literature using a “conceptual framework.”[3] Moreover, there was a time when Molière’s plays were not read as plays but as texts. Molière thinks, but he does so within a genre, comedy, that constitutes, in and of itself, a “conceptual framework.”

The commedia dell’arte troupe of the Gelosi in a late 16th-century Flemish painting (Musée Carnavalet, Paris). The woman is usually identified as Isabella, after Isabella Andreini  (Photo credit: Wikipedia)

The dramatist personæ is:

The dramatis personæ also includes a notary, a maid (Georgette), and a valet (Alain).

At one level, the plot is that of farces: the trompeur trompé. But, combined with the trompeur trompé, the plot of L’École des femmes is also the archetypal struggle between the eirôn (the young lovers) and the alazṓn (the blocking character or personnage-obstacle). Le blondin berne le barbon.

In this post, I am telling the plot of the School for Wives, l’École des femmes and write an analysis in a second post. The plot itself is significant. Genre is the starting-point.

Arnolphe adopted Agnès when she was four years old. He wants to marry her, but fearing he might be cuckolded, he had his ward raised in a convent where she was taught as little as possible about the ways of the world. He thinks that a wife who is sotte and bête, stupid or a beast, will be faithful. He is 42 years old and Agnès, 17.

As the curtain rises, Chrysalde is warning Arnolphe not to boast. Despite his precautions, he may be cocu and people would laugh at him outloud. A cocu is a man whose wife is unfaithful. It is best, expains Chrysalde not to make fun of others. If one does not laugh at others, their laughter will be hushed if destiny strikes a blow, which it often does (I. i)(I.1)

Arnophe returns from a trip (I. i)(I. 1). He tries to enter his house, but Georgette and Alain do not seem to know that they should open the door (I. ii).

Arnolphe talks to Agnès who has been sewing (I. iii). Arnolphe also meets Horace, the jeune premier, who tells Arnophe that his father will soon have a visitor, Enrique, and he asks for money which Arnolphe provides (I. iii)(I. 3).

Horace tells Arnolphe that he has met a lovely woman who is being kept in a house by some sort of senex iratus who is very jealous, Arnolphe is 42 (I. iv)(I. 4).

Horace does not know that Arnophe has changed his name to Monsieur de la Souche.

Arnolphe expresses his feelings. He is in pain (II. i)(II. 1). He talks with his valet and maid who let a man enter the house (II. ii). Alain explains that Arnolphe is jealous and that Georgette would also be jealous if someone took the soup she is eating (II. iii)(II. 3).

Our senex iratus confronts Agnès, thinking she can deny what Horace has said. She cannot. On the contrary, she has been polite, obedient and truthful, as she was taught. Horace waved at her and she waved back, not to be impolite. He waved again, and she waved back again. Agnès had been told not to see anyone, but she had also been taught civility. She did as she was taught.

Arnolphe is alarmed. He was to know if Horace touched Agnès. Again she tells the truth. He did. He caressed her hands and arms. Arnolphe wanders if he has caressed anything else. She hesitates, but says that she gave Horace the ribbon Arnolphe had given her (II. iii)(II.3).

Arnolphe says she will marry that very evening. She thinks her spouse will be Horace, but Arnolphe’s intentions are different. He will be the spouse.

In Act III, Arnolphe instructs Agnès on how to be a good wife: she must be docile because the husband is in charge, etc. L’une est moitié suprême, et l’autre subalterne[.] (III. ii; III. 2)
[The one half is supreme, and the other subordinate.] (The School for Wives) He describes the boiling cauldrons of hell.]

He then has her repeat:

Horace tells Arnolphe that Agnès has managed to attach a message to a rock she was to thrown at him. (III. iv; III, 4).

Arnolphe cannot believe that Horace should be confiding in him. Horace is doing very well. He tells Arnolphe that Agnès has seen him and let him into her room. When she heard Arnolphe, she put Horace in a closet. They will be meeting that evening (IV. vii).

In Act V, Arnolphe thinks that Georgette and Alain have killed Horace, but they haven’t. In fact, Horace is quite well and Agnès is with him. To protect her reputation, he wishes for Arnolphe to look after her. Agnès thinks he loves her less than she loves him (dépit amoureux). Ironically she is being returned to Arnolphe.

Enrique is Agnès’ father. Her real name is Angélique. He has made arrangements to marry her to Oronte’s son. Oronte’s reaction is the following:

Horace learns that Arnolphe is now called Monsieur de la Souche, which is why he told him about Agnès. It turns out, however, that Enrique would like Oronte’s son Horace to marry Agnès. Arnolphe leaves.

Nature claimed its “rights.” Horace intended to marry the woman who happens to be Enrique’s daughter. So, all’s well that ends well.

I will break here, without a conclusion. It is too long to be posted with the plot. Moreover, this play was controversial. 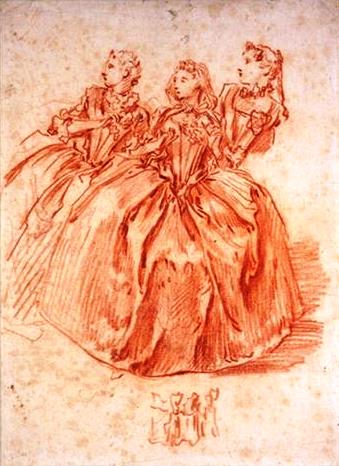 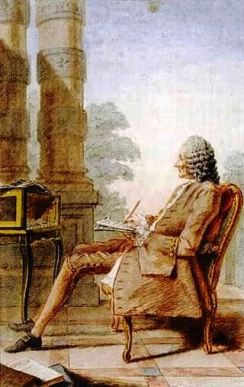