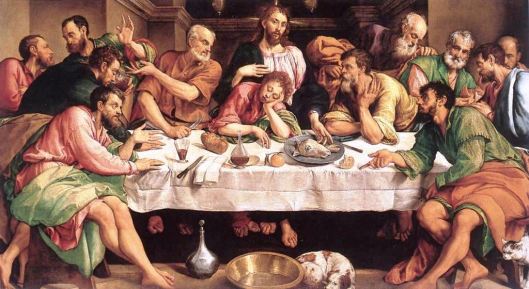 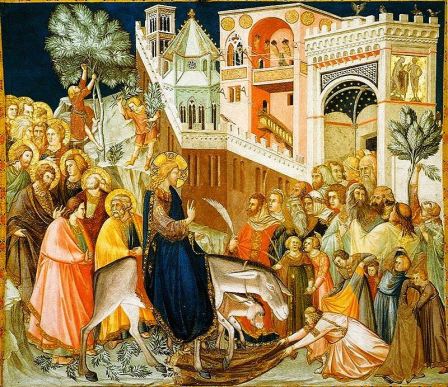 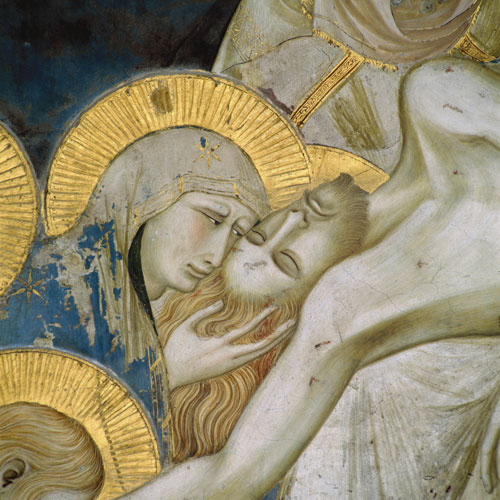 In the Quebec of my childhood, Holy Week was very precious. It justified a rather long holiday that brought grief and joy. Jesus of Nazareth is a tragic figure. “He was a Man of sorrows, and acquainted with grief.” (See Man of Sorrows, Isaiah 53.)

But there was a holiday and Easter brought Eastertide; it brought spring. I do not remember on which day classes ended, but we were not in class on Holy Thursday (Maundy [washing of the feet] Thursday) and Good Friday. To the best of my recollection, it was a four-day holiday which started on Holy Thursday and ended on the day Easter was celebrated. I do not think it included Easter Monday. At the moment, in Quebec, Holy Thursday and Good Friday are not holidays or fériés (feasts), and Easter Monday is a holiday, a legal holiday.

The week started on Palm Sunday. Branches were woven into fine decorations. We could purchase these at church and take them home. We used them from Easter to Easter. In Quebec, these were not made of palm leaves, but they were boughs, des rameaux. Holy Thursday and Good Friday were devoted to devotional practices. We attended mass and, on Good Friday, we walked from one station of the Cross to another. There were six stations on each side of the church, a total of twelve. (See Stations of the Cross, Wikipedia).

Jesus had been betrayed by one of his twelve apostles, Judas Iscariot. After the Last Supper, a Passover observance and the institution of the Eucharist (Mass), Christ and his disciples went to Gethsemane at the foot of the Mount of Olives in Jerusalem. His apostles could not remain awake and stand vigil with him.

Mass and the Divine Hours

Mass, the Eucharist, commemorates the Last Supper. But the Divine Hours, kept by Cenobite monks, monks living together, commemorate Jesus’ vigil at the Mount of Olives. Books of Hours find their origin in the eight (originally seven) Canonical Hours, or Divine Hours.

Jesus was arrested and condemned. He was flogged (la flagellation), crowned mockingly, a crown of thorns, and carried the Cross on which he was crucified. Crucifixions are a form of torture leading to death. They are still carried out. Isil crucifies some of its victims.

On Good Friday, at three in the afternoon we had to be quiet. We were told that Christ had died at that hour of the day.

The Easter Vigil was a particularly significant and beautiful celebration. A Paschal candle was lit at the back of the church and carried to the front. Everyone was given a candle. The priest stopped at each row to light one candle and the flame was passed on to everyone occupying that row.

Easter was a lovely celebration. We had many visitors. We ate chocolate, but we did not look for eggs. Then came Easter Dinner, called Supper in Quebec, my mother usually made ham, which was also the case in other households. We did not drink wine.

As you know, Easter is a moveable feast, celebrated near the spring equinox. You may remember that the Gregorian Calendar (Pope Gregory XIII) was adopted because Christmas was celebrated later and later every year and, by the same token, so was Easter. The Eastern Church retained the Julian Calendar (old style: O. S.). This year the vernal equinox, for the northern hemisphere, equal day and night, occurred on 20 March and, in the Western Church, Easter will be celebrated on the 27th of March. In the Eastern Church, Easter will be celebrated on the 1st of May. Easter is rooted in the Hebrew Passover, which will be observed on the 23rd of April.

It appears “Jewish Christians, the first to celebrate the resurrection of Jesus, timed the observance in relation to Passover.” (See Easter, Wikipedia.) Passover commemorates the Jewish Exodus from slavery into Egypt. The date on which Easter is celebrated and the links between Passover and Easter, in both the Western Church and the Eastern Church, have been a subject of controversy, beginning with the Council of Nicaea (325 CE). Such matters are best discussed by theologians.

For Christians, Easter is the most important religious feasts of the year. However, Jesus did not found a Church and he was not recognized as their Christ by the Jews. Moreover, he did not leave a sacred text. He was a prophet in Islam: al-Masih (the Messiah, le Messie). (See Jesus in Islam, Wikipedia.)

One of the most compelling depictions of grief in art is the mater dolorosa. A mother had seen her son suffer and die. As of Good Friday, the Marian Antiphon, of which there are four will be the Regina Cæli  Both Michel-Richard de Lalande‘s Regina Cæli and Pergolesi‘s exquisite Quando corpus morietur are featured in a post entitled Music for Easter (see  RELATED ARTICLES, below). 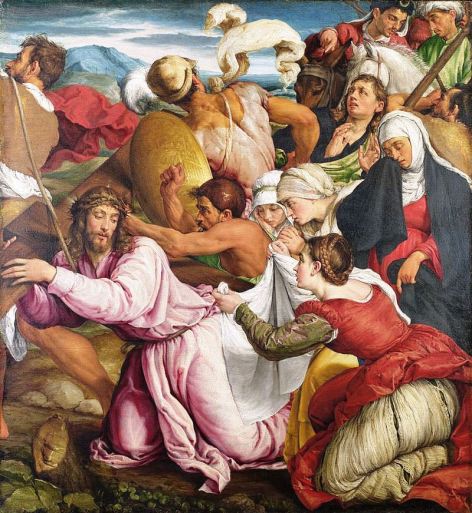 The Way to Calvary by Jacopo Bassano (Google Art Project) 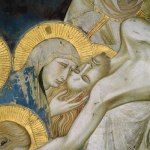