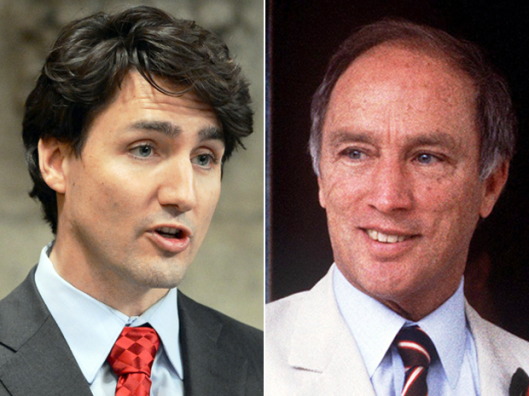 Justin Trudeau and Pierre Trudeau: There are both  similarities and profound difference between Father and Son. (The Canadian Press Files)

I’m returning to the fine arts, stories, music, literature, aboriginals, &c. However, before I turn the page, allow me to comment on reactions that followed Monday’s Liberal Party victory.

On Tuesday, 20 October 2015, I read numerous newspaper articles as well as posts on the Federal election held Monday, 19 October 2015. By and large, journalists were surprised but happy with the outcome of the Canadian election.

However, I had written somewhere that because he was Pierre Trudeau’s son, Justin Trudeau had to face obstacles during his campaign. It was therefore suggested to me that being rich, famous and well-connected was not an obstacle, which I took to mean that being rich, famous and well-connected was an advantage. There can be no doubt that money, fame and the right connections can make a political campaign easier, but that is not altogether the case.

In other words, the fact remains that Justin Trudeau earned his victory in last Monday’s Federal election by presenting a coherent platform and one that addressed the needs of ordinary Canadians, beginning with Canada’s children and its families. It has become increasingly difficult for Canadians to make ends meet and save for retirement. 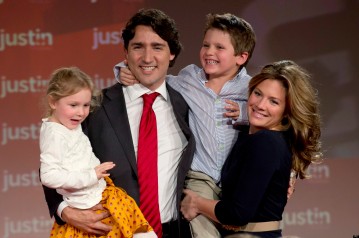 The Leadership of the Liberal Party of Canada

However, at the beginning of the electoral campaign that culminated in a victory for the Liberals, Mr. Stephen Harper, the leader of the Conservative Party of Canada, stated that Justin Trudeau “[would] exceed expectations if he [came] on stage with his pants on.” The inference was that Justin Trudeau was too young and unable to fill his father’s shoes.

Father and Son: The Moment

A comparison between father and son was inevitable and it is “trending,” which the image featured at the top of this post indicates. Moreover, although allusions to the father, Pierre Trudeau, were scarce during the campaign, the statement uttered by Prime Minister Stephen Harper at the onset of the 2015 Federal Election campaign remained on the mind of voters.

Pierre Trudeau was a Professor of Law who held a Master’s degree in Political Economy from Harvard University and had studied at both the Sorbonne and the London School of Economics. I will list some of the highlights of the Trudeau years.[1]

The above list is incomplete. Moreover, I should mention that Pierre Elliott Trudeau’s decisions and policies were not always popular. On the contrary. For instance, in October 1970, members of the Front de Libération du Québec (FLQ), the terrorist branch of Quebec’s separatist movement, kidnapped British diplomat James Cross and assassinated Quebec’s Minister of Labour and Deputy Premier Pierre Laporte (25 February 1921 – 17 October 1970). (See October Crisis, Wikipedia.)

Trudeau brought on the War Measures’ Act and, as a result, militant separatists were arrested and several spent a night or more, in prison. These Quebecers have since been elevated to martyrdom.

I should also note that many Québécois and French Canadian nationalists resented the introduction of multiculturalism. Multiculturalism seemed inconsistent with the previously enacted biculturalism.

The Multiculturism Act was not passed until 1988, under Prime Minister Brian Mulroney, but it was Section 27 of the Canadian Charter of Rights and Freedoms, embedded in the Constitution Act of 1982.

In short, the truly great Pierre Trudeau miffed a few citizens, and Justin Trudeau was not a sure winner if compared to his father. Although the son has a more engaging personality than the father, they share several views and the son is as determined as the father.

Justin Trudeau is well-educated, but he is not the intellectual his father was. People remember. But let us consider that times have changed and that, in 2015, Justin Trudeau seemed the man of the moment, just as his father had seemed the man of the moment in the 1970s, but for different reasons. In choosing leaders, the moment is a crucial factor. Between 1968 and 1984, the moment called for the intellectually polished Pierre Elliott Trudeau to lead the country. But 2015 was a different moment.

Therefore, contrary to Mr. Harper’s statement, expressed above, Justin Trudeau exceeded expectations. Not only did he come on stage fully and properly dressed, but Canadians found in him a listener and a very approachable candidate. He, Justin Trudeau, had a coherent and persuasive platform.

Yes he needed money to run a campaign, but money is not what brought him a resounding political victory. Mr. Harper and Mr. Mulcair also had money. One can donate money, within limits, to a political party.

People, members of Parliament and Premiers, are looking forward to working with Justin Trudeau, soon to be the Right Honourable Justin Trudeau. For instance, ten Indigenous Canadians will sit in the House of Commons, la Chambre des communes, which comprises 338 members. One is Robert-Falcon Ouellette, a Métis representing Winnipeg Centre. He holds a PhD. 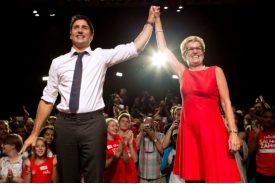 Being rich does not preclude being good. Justin Trudeau is a good person. No, he was not expected to be elected. However, he exceeded everyone’s expectations and may continue to do so.

I have just edited this post, and I apologize.

With kindest regards to all of view. ♥