A varied Settlement of the Americas

My post on the Ten Lost Tribes: Native Americans generated more interest than I expected. This theory dates back to James Adair‘s (c. 1709 – 1783) History of the Indians, in 1775, and it is supported by Israeli scholars. (See Ten Lost Tribes, Wikipedia.) However, their entering through the Bering Strait during the last glacial period is not the only account of the migration of Amerindians to the Americas. Another account, besides the Ten Lost Tribes, is Welsh prince Madog or Madoc‘s story.

According to folklore, Madoc ab Owain Gwyneed, a Welsh prince and therefore a white man, sailed to America in 1170. These Amerindians were first mentioned in a cywydd, an epic poem, by the Welsh poet Maredudd ap Rhys (fl. 1450 – 83) of Powys.” The existence of these white Amerindians is, of course, a disputed issue, but there may have been Welsh-speaking “Indians.”

There is a tradition of a “white Indian” settlement at Louisville, Ky., and several 17th- and 18th-century reports were published concerning encounters of frontiersmen with Welsh-speaking Indians. Most anthropologists reject the idea of pre-Columbian European contacts with American Indians, but the evidence is not conclusive. The story is the basis of the epic poem Madoc (1805) by the English poet Robert Southey.[1] 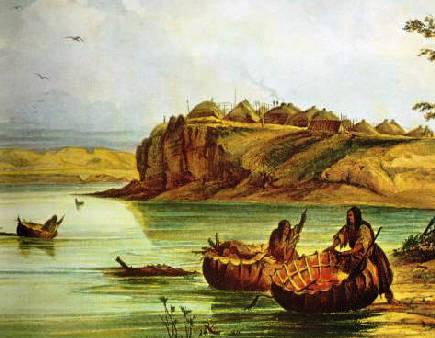 Their descendants would be the Mandan tribe of South Dakota. Artist George Catlin (26 July 1796 – 23 December 1872), who specialized in painting Amerindians,  “thought the Mandan bull boat to be similar to the Welsh coracle.” It should also be noted that the Mandan tribe, established “permanent villages featuring large, round, earth lodges, some 40 feet (12 m) in diameter, surrounding a central plaza.” These earth lodges are displayed in the images above and below. (See Mandan, Wikipedia.) 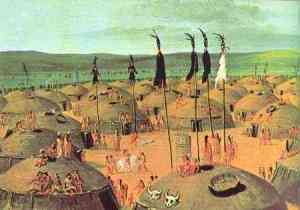 In his 1584 Historie of Cambria, David Powel reported that, dissatisfied with the quarrels that divided his family, Welsh Prince Madoc ab Owain Gwynedd, one of the numerous sons of King Owain Gwynedd, and his brother Rhirid, tried to create a settlement in North America. On board their ships were 100 settlers: men, women, and children, who disembarked.

The brothers sailed back to Wales to recruit more settlers, but the second group of Welsh colonists ported in Mexico. As for Madoc and Rhirid, they never returned to Wales, nor did they visit their North American colony.

We do not know where Madoc’s North American colonists ported, but they intermarried and it is claimed that they are the ancestors of the Mandan tribe, Plains Amerindians who lived on the banks of the Missouri River and its tributaries and spoke a Siouan language, and if their encounters with Welsh-speaking colonists are not imaginary, some may also have spoken Welsh.

The theory according to which the Mandans are descendants of the Welsh has been mostly discredited. But there are reports of encounters. According to Wikipedia, Francis Lewis, a Welshman, was captured by Louis-Joseph de Montcalm during the French and Indian War (1754 – 1763). During his captivity, Francis Lewis is said “to have had a conversation with an Indian chief who spoke Welsh, which apparently saved his life.” There were other such encounters. (See Madoc, Wikipedia.)

Pierre Gaultier de Varennes, sieur de La Vérendrye (17 November 1685 – 5 December 1749), known as La Vérendrye, named the Mandans. He had heard Mantannes. The  cart pulled by dogs or horses used by Plains Amerindians, is called a travois, from the French travail FR. La Vérendrye and his four sons opened the territory west of Lake Superior. Two of his sons reached the Rocky Mountains.

The Mandans were farmers and therefore sedentary, but the “buffalo,” or bison, was central to their survival, as it was to all Plains Amerindians. Its destruction by the white led to famine. In fact, it was genocidal. The bison provided meat, clothing, teepees (tents) and other essentials of life.

American General Phil Sheridan said, “Let them kill, skin and sell until the buffalo are exterminated. Then your prairies can be covered with speckled cattle and the festive cowboy.”

Four million buffaloes were killed in Canada and Amerindians participated in the mass slaughter of their very livelihood. I suspect they acted out of fear. (See The Buffalo Slaughter in a People’s History, Canadian Broadcasting Corporation).

King Philip‘s fear that Amerindians would lose the land that fed them was in no way imaginary. John Wadsworth Longfellow made famine the demise of Hiawatha‘s people, which was fictional but not imaginary.

A Skin Lodge of an Assiniboin Chief

Fort Clark on the Missouri, February 1834 by Karl Bodmer

A pair of Mandan men in a print by Karl Bodmer, 19th century

Yet, their skin colour was lighter than that of other American aboriginals, which is not obvious in the art of Catlin and Bodmer. Their features, however, could be European. It has therefore been speculated that they were of European origin, just as Cherokees would be the descendants of the Ten Lost Tribes. Interest in matters exotic and disappearing aboriginals is one of the characteristics of 19th-century scholarship, literature, and the fine arts. It may have led Prince Maximilian of Wied-Neuwied to study the manners, customs, and language of the Mandan tribe. For instance, prince Maximilian looked for possible similarities between Welsh and the Siouan language of the Mandans.

In 1832, Prince Maximilian of Wied-Neuwied and 23-year-old artist Karl Bodmer, also known as Jean-Charles Bodmer, went up the Missouri River and visited the Mandans and other Native Americans. In 1840, Prince Maximilian published his Travels in the Interior of North America during the years 1832-1834 (Reise in das Innere Nord-Amerikas, 1840). Prince Maximilian’s account of his travels, illustrated by Karl Bodmer, and George Catlin’s paintings may well constitute the only remains of the Mandan tribe, some of whom may have been of Welsh descent. According to the Census of 2010, there are very few Mandans left, a mere 365 full-bloods and 806 of partial Mandan ancestry.

Encampment of the travellers on the Missouri. Maximilian is likely the man on the right in blue smoking a pipe. Aquatint illustration by Karl Bodmer (Caption and Photo credit: Wikipedia)

It would be unrealistic to assume that all Native Americans entered the Americas from the Beringia Land Bridge. Diversity among Amerindians precludes a single point of origin. In all likelihood people crossed the Atlantic Ocean from the moment there was an Atlantic Ocean to cross. This is what human beings have always done. Europeans were fishing off the coast of Newfoundland in the 1200s.

Therefore, although Madoc’s story seems a little fanciful, it has entered the pages of the Encyclopædia Britannica and it is told in a wealth of details in Wikipedia. Although we cannot ascertain there ever lived a Madog or Madoc, it occurred to the British that they should claim discovery of the Americas because Madoc was in the Americas 300 years before Christopher Columbus. (See Madoc, Wikipedia.)

With kindest regards to all of you. ♥