“This documentary shows the inspiration behind Inuit sculpture. The Inuit approach to the work is to release the image the artist sees imprisoned in the rough stone. The film centres on an old legend about the carving of the image of a sea spirit to bring food to a hungry camp.” (YouTube)

Inuit are excellent artists. Many are carvers and make carvings using soapstone. In earlier days, their preference was for walrus ivory. Their art can be found in galleries and museums in Canada’s larger cities: Montreal, Toronto, Vancouver, and Ottawa, but it seems that Winnipeg has Canada’s finest collection of Inuit art as well as several artists who draw inspiration from Inuit art. Toronto opened its Museum of Inuit Art in 2007. But Inuit art can also be found in New York at Look North New York. (See Inuit Art)

I was introduced to Inuit carvings in a Toronto store. The owner was very knowledgeable. Inuit carvings are sometimes very expensive, but they are one of Canada’s national treasures. Inuit are celebrated carvers, but Inuit also produce images that are characterized by permanent newness and, at times, humour. They are heirs to Japonisme.

I chose the film shown at the top of this post not only because of its subject matter and carvings but also because it contains a legend reflecting the legend of the mermaid. It has stories. The film was produced in 1958 by director John Fenney who also directed a movie about Kenojuak Ashevak (3 October 1927 – 8 January 2013), an acclaimed artist who worked using several media: carving, drawing, print-making, etc.

Ashevak spoke Inuktitut, the language of Nunavik (Quebec). You may note that Inuit often sing, like voyageurs. They seem delighted people.

The National Film Board: The Land of the Long Day

The National Film Boar/l’Office national du film has an extensive collection of documentaries on Inuit or the north. I could not find an English-language version of Au pays des jours sans fin. It is a very informative documentary. The Land of the Long Day https://www.nfb.ca/film/land_of_the_long_day.

Kenojuak is the most celebrated Inuit printmaker (stencils or pochoirs). She died in 2003, at the age of 85. But let us see a few carvings and, in a short video, the art of Kenojuak and colleagues. 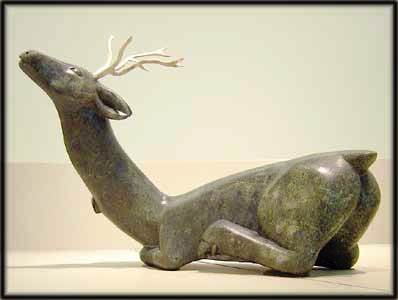