Study for Chapel of Château.1

Study for Chapel of Château.2 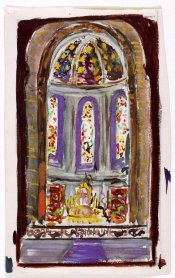 Study for Chapel of a Choir.3

In my last post, Austerity in Quebec (12 April 2015), I listed four of the changes, listed below, that occurred during Quebec’s Quiet Revolution. I will expand on this subject but point to elements that were detrimental to the establishment of a welfare state, such as the fourth change and Canada’s language laws.

Precursors to the Quiet Revolution

I also mentioned a precursor to the Révolution tranquille (FR), the Asbestos strike (la grève de l’amiante) of 1949. However, a second precursor was Refus global (total refusal), a manifesto written by Paul-Émile Borduas (1 November 1905 – 22 February 1960) and signed by a group of artists calling themselves the Automatistes. This document was released on 9 August 1948. It is presented in two earlier posts.

A third and very important agent of change was the arrival in Quebec of a large group of French-speaking immigrants and other European immigrants. Prominent figures were, for example, Guy Hoffman (7 April 1916 – 6 March 1986) and Ludmilla Chiriaeff, CC GOQ (10 January 1924 – 22 September 1996).

Radio-Canada and the National Film Board

Radio-Canada, the French-language counterpart of the Canadian Broadcasting Corporation (CBC), and the Office national du film (ONF), the National Film Board (NFB), became employers to French-speaking intellectuals and “personnalités”  (celebrities). During the fall and winter seasons, Radio-Canada showed televised series based on French-Canadian novels and most Sundays, a televised drama. On Saturday evening, everyone watched the hockey game. Quebecers were fans of the Canadiens.

Therefore, as Maurice Duplessis, “le Chef,” and members of the Union Nationale ruled from Quebec city, the Province of Quebec was changing. I remember my father’s “secret” suitcase he took to “secret” meetings.

The above takes us to a new list of events and circumstances that militated against l’État-providence, or the welfare state, and isolated Quebec.

By 1960, Québec was ready for its Révolution tranquille. It was a vibrant community, but a community that had its “patriotes” and, among them, terrorists.

During the 1960s, the Front de libération du Québec, the FLQ, detonated 95 bombs. Most were placed inside mailboxes. According to Wikipedia:

“It was responsible for over 160 violent incidents which killed eight people and injured many more, including the bombing of the Montreal Stock Exchange in 1969.” (See Front de libération du Québec, Wikipedia.)

On 5 October 1970, the Front de Libération du Québec kidnapped James Richard Cross, a former British diplomat and a senior trade commissioner. On 10 October, the Quebec Liberation Front also kidnapped Pierre Laporte, Quebec’s Deputy Premier and Minister of Labour. Pierre Laporte was “executed” on 17 October 1970. His body was found in the trunk of Paul Rose‘s car. Paul Rose was the leader of the Quebec Sovereignty Movement. He was convicted of the kidnapping and killing of Pierre Laporte. Mr Cross CMG was released on 10 December 1970.

During the October Crisis, Robert Bourassa, the Premier of Quebec, and Jean Drapeau, the Mayor of Montreal, both requested help on the part of the Federal government, or Ottawa. Prime Minister Pierre Elliott Trudeau declared the War Measures Act (Martial Law). 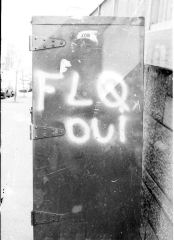 A postal box in Montreal bearing the graffiti FLQ oui (FLQ yes) in July 1971. The FLQ conducted several bombings of post boxes which typically bore a decal of the Royal Coat of Arms of Canada.

Its language laws also militated against the establishment of a welfare state, l’État-providence. In 1974, five years after the Official Languages Act made Canada an officially bilingual country, the Quebec government passed its Official Languages, Act (1974), declaring Quebec a unilingual province. After René Lévesque‘s Parti québécois  was elected into power, Bill 22 was expanded into Bill 101: the Charter of the French Language.

The preservation and growth of the French language is the chief and legitimate goal of Quebec’s language laws, but these laws may be offensive to persons who view themselves as Canadians first and then Quebecers. It seems perfectly acceptable to require that Immigrants to Quebec learn French and that their children enrol in French-language schools. Yet Canada remains a bilingual country and promotes French. Besides, Acadians are French-speaking Canadians who live outside Québec, as do many French-speaking Canadians. There is a French-language Canada outside Quebec. I will add that Quebec language laws are at times rather petty.

I should note in closing that Quebec did not sign the Canada Act of 1982, or the patriation of the Constitution. The act was signed after the first referendum on sovereignty which took place on 20 May 1980. The 1980 referendum did not provide the Quebec government with a clear mandate to modify its ties with the Federal government, which is problematical. That matter has yet to be resolved but must be resolved because the status of Quebec within Canada is currently ambiguous.

At any rate, a welfare state seems impossible at the moment. In order to establish l’État-providence, a government needs a large number of taxpayers, but Quebec seems to drive taxpayers away mostly through language laws. The Couillard government could have raised taxes, except that Quebecers pay taxes to both the Provincial and Federal government and are the only Canadians to do so. Obviously, a little austerity is the better path to follow, provided it does not take bread away from the table and does not deprive people of a roof.

In my opinion, the first order of business is signing the Canada Act of 1982.

This post is somewhat incomplete. I am still feeling very weak. It’s time for spring to chase away winter. This was one of Quebec’s longest winters.

My best regards to all of you.♥