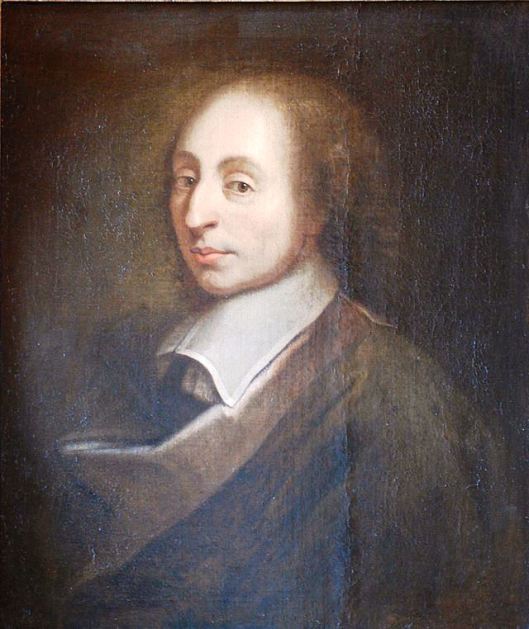 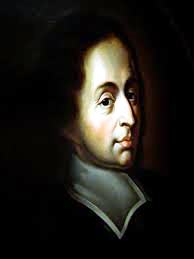 Portrait of Blaise Pascal made by François II Quesnel for Gérard Edelinck in 1691 (Photo credit: Wikipedia)

Voltaire‘s Candide was a satire of Leibniz‘ metaphysics, but not a criticism of Leibniz himself or all of his theories (1 July 1646 – 14 November 1716). Gottfried Leibniz, who lived in Leipzig, was a great mathematician, inventor, logician and diplomat. He believed in God and assumed that God was good, hence his “best of all possible worlds.” It was a noble thought, but nearly three centuries later, we remain very short of good.

The word “sufficient” reminded me of Pascal (19 June 1623 – 19 August 1662: aged 39) who, despite illness, chronic pain, and his rather short life, contributed so much to the world of ideas and to science. While I was writing my posts on Candide, a monument to humankind, I was puzzled by Leibniz’s use of the word “sufficient.”

I remembered telling my students that after Étienne Pascal, Blaise Pascal’s father, lost his wife, he left Clermont-Ferrand, where Blaise was born and settled in Paris, where he often had guests who were prominent scientists.

Given that his son Blaise could not travel, due to ill health, whenever a scientist was in Paris, Étienne tried to introduce him to his son who was a child prodigy. In fact, the work done by Pierre de Fermat (17 August 1601 or 1607 – 12 January 1665) and Pascal into the calculus of probabilities laid “important groundwork” for Leibniz‘ formulation of the calculus. (See Leibniz, Wikipedia.)

At this point, allow me a slight digression.

As scientists, both Pascal and Leibniz invented calculators.

Blaise Pascal’s father was a tax farmer, the name given tax collectors during the ancien régime. This was a position one could purchase as was the case with many positions in 17th– and-18th-century France. Louis XIV was forever in need of money to pay for Versailles and finance his wars. Selling positions was yet another avenue allowing Louis to replenish France’s empty vaults.

As tax collector, Pascal’s father needed a calculator, so his son Blaise invented the Pascaline, an ancestor to our calculators and to computer science. It was a helpful machine and there are a few Pascalines left for everyone to see.

But Leibniz also invented a calculator, his Leibniz’s Wheel. Under Wikipedia’s entry on calculators, the reader is told that Leibniz’s calculator was never “fully operational.”

“Schickard [mostly] and Pascal were followed by Gottfried Leibniz who spent forty years designing a four-operation mechanical calculator, inventing in the process his Leibniz wheel, but who couldn’t design a fully operational machine.”

However, the Leibniz’ wheel entry tells a different story.

“Invented by Leibniz in 1673, it was used for three centuries until the advent of the electronic calculator in the mid-1970s.”

I wouldn’t dare refute that statement as we may be looking at two slightly different machines (“inventing in the process”). But I will point out that the “abacus,” was “a calculating tool that was in use centuries before the adoption of the written modern numeral system and is still widely used by merchants, traders and clerks in Asia, Africa, and elsewhere.” (See Abacus, Wikipedia.) It “was known to have been used by Sumerians and Egyptians before 2000 BCE.” I should think that humans have always had some sort of calculator. (See Calculator, Wikipedia.)

Let us return to the word ‘Sufficient’

Pascal may have provided an element to Leibniz’s vocabulary: the word “sufficient,” as in “sufficient reason.” This no one can prove, but it is either ‘probable’ or quite a coincidence. I should note that Pascal did not support fully the use of reason to arrive at scientific truths, in which he differed from Leibniz, at least initially. For Pascal reason, or “l’esprit de géométrie,” was the other half of “l’esprit de finesse,” a form of instinct or intuition (le cœur),[2] from which emanates the seminal idea that leads to an important discovery or further knowledge. Beautiful melodies are mostly inspired. 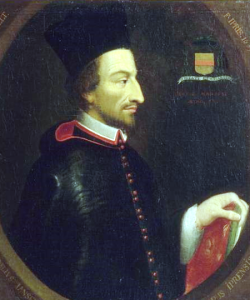 Pascal was a Jansenist. Jansenism is neither a religion nor a sect; it is a concept within Catholicism that would later be condemned as heretical.[3] Jansenists believed in predestination, which meant that although one lived a virtuous life, virtue could not lead to salvation. Those who believed in God and lived a virtuous manner had been granted sufficient (suffisante) grace, but only efficacious (efficace) grace ensured one’s salvation. Therefore, however good a person could be, salvation was an arbitrary gift. It could not be attained, except by the chosen ones. 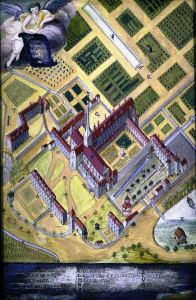 In other words, according to the Jansenists, who lived at Port-Royal-des-Champs and Port-Royal Abbey, in Paris, were friends of Pascal, there were two forms of grace: la grâce suffisante (sufficient grace) and la grâce efficace FR (efficacious grace), only one of which, la grâce efficace could ensure salvation and God, if He existed, which Pascal set out to prove in his unfinished Pensées (Thoughts), selected those who would be saved.

To complicate matters, Jesuits, also attacked by Voltaire, had devised a system that allowed people to sin without sinning. (See RELATED ARTICLES.) Nothing could excuse casuistry and it was injurious to all who lived a good life. In 1646, Pascal became a Jansenist and, a few years later, in 1656-67, when Jansenism was first condemned, he wrote his Provincial letters, 18 letters and a possible 19th, the masterpiece that inspired Voltaire’s Candide.

Cornelius Jansen‘s (28 October 1585 – 6 May 1638) is the founder of Jansenism, as his name suggests. His Augustinus (1640) was published posthumously in Louvain/ Leuven, Belgium and sparked a controversy.

I will not enter into details. Suffice it to repeat that one could not be saved even if one had led a virtuous life. Such thinking is extremely pessimistic, but given Jesuit Casuistry (la casuistique), the faithful defended the monks of the Port-Royal-des-Champs abbey, one of whom was Pascal. The issues raised by Jansenism were:

The Oxford English Dictionary provides the following description of grace: “Grace in Christianity is the free and unmerited favour of God as manifested in the salvation of sinners and the bestowing of blessings.”

The Following are quotations from Wikipedia

In Islam, according to “Dr. Umar Al-Ashqar, dean of the Faculty of Islamic Law at Zarqa Private University in Zarqa, Jordan: ‘Paradise is something of immense value; a person cannot earn it by virtue of his deeds alone, but by the Grace and Mercy of Allah.’

This stance is supported by hadith: according to Abu Huraira, prophet Muhammad once said that ‘None amongst you can get into Paradise by virtue of his deeds alone … not even I, but that Allah should wrap me in his grace and mercy.’”

In Hinduism, “one Hindu philosopher, Madhvacharya, held that grace was not a gift from God, but rather must be earned.”

Neither Jansenists nor Muslims can earn salvation. They cannot erase the original sin. Consequently, they may despair. Existentialism claims the opposite. Humankind makes itself, which cannot be entirely the case. Yet, quite astonishingly, Voltaire was an early existentialist. He stated that “[m]an [was] free at the moment he wishe[d] to be.”

As for Pascal, he lived virtuously wagering that he was among the chosen ones. The text of the Wager is in Sources and Resources, below.

However, the wager can be summarized. According to Pascal, we cannot know whether or not God exists. For him, God existed. He was a man of faith. But had he not been a man of faith, he would nevertheless have wagered that God existed. By doing so, one has everything to gain and nothing to lose.

The Theory of Probability and the Pari fatal

Here we sense that Pascal and his friends, the duc de Roannez FR but mainly Pierre de Fermat contributed in the development the theory of probability. It is possible to calculate the odds. The following quotation is in French, but the wager can be summarized. One has nothing to lose by wagering that God exists and everything to lose by not waging He exists. (See The Wager.)

“if you win, you win everything; if you lose, you do not lose anything. So bet that God is, without hesitating.”

In a world where Jesuits could take sin away from sinners, it is understandable that Christians in France should have chosen to defend Jansenism. Casuistry allowed kings and aristocrats to have a mistress without remorse. If one’s intentions were good, one could kill, rape and pillage. Pascal therefore took the defense of Jansenism and the priests of Notre-Dame-des-Champs, Cistercian nuns and monks. They avoided sins, were truly devout, and lived according to their vows.

Voltaire was not a Jansenist, but he believed in God. Many humans believe in God because they see orchids, the amaryllis, dawn, and glorious sunsets. The birth of a child seems a miracle. However, Jansenism did not give anyone the chance to go to heaven and imperiled happiness. Humans must atone. Therefore, happiness during this brief lifetime could point to eternal damnation. 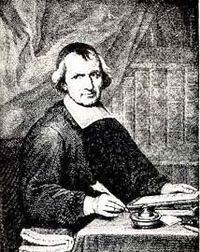 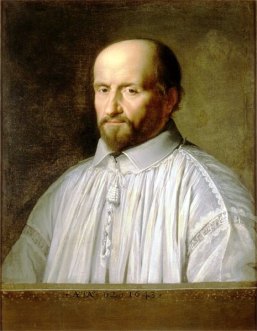 (My computer was hacked and has not been fully repaired. So this post is not altogether complete. I must discuss free will, Les Provinciales [the syle], original sin, etc. Les Provinciales were published under a pseudonym: Louis de Montalte.)

My best regards to everyone.

5 thoughts on “Pascal and Leibniz: Details”