For Catholics, Charity is the most important of the three theological virtues: faith, hope, charity. The events of the past week brought the word charity to my mind. I faced several obstacles because I could not provide a credit card number.

But let us turn to Marian Hymnology, Guido Reni‘s art and Tomás Luis de Victoria‘s compositions. We will call it a pause.

By clicking on the titles below, you will be at Notre-Dame de Paris. On the left side of the page are the titles of the four Marian Antiphons. Choose the antiphon you wish to listen to. You will also be provided with the words.

The Extraordinary Hermann of Reichenau

The Salve Regina is one of the four Marian Antiphons. It was composed (Gregorian Chant) by Hermann of Reichenau (18 July 1013 – 24 September 1054) who was severely crippled and spent most of his brief life at the Benedictine Abbey of Reichenau. Hermann “the lame” became a monk. He was a scholar, a composer, a music theorist, a mathematician, an astronomer, and a linguist.

However, the composition, I have inserted at the foot of this post is not Gregorian chant, but a setting by prominent Spanish composer Tomás Luis de Victoria (c. 1548 – 27 August 1611) of the lyrics of the Salve Regina. It is a combination the French would call heureuse, happy.

Guido Reni (4 November 1575 – 18 August 1642) was born in Bologna. He is a high Baroque artist remembered for his use of luminous colours. The painting shown above does not reveal this characteristic. It is somewhat and successfully monochromatic. His themes were biblical and mythological and therefore consistent with the subject-matter of painters of his era. The little children he depicted resemble putti, but putti (plural for putto) have wings.

Reni was an apprentice to Flemish artist Denis Calvaert (1540 – 16 April 1619), often called Il Fiammingo due to his origins. In the very late Middle Ages, just prior to the Renaissance,[1] Flanders was the cultural hub of Europe. Adrian Willaert of the Franco-Flemish school taught music to students in Venice who were very gifted and whose love for music was exceptional. In turn, the Italians created the French Overture. It was introduced in France by composer Jean-Baptiste Lully, born Giovanni Battista Lulli. Lulli was also a dancer and choreographer who worked with French playwright Molière (1622 – 1673).

Guido moved to Rome in 1601 and his first commission was an altarpiece of the Crucifixion of St. Peter. During this period of his life, Guido’s patron was Paolo Emilio Sfondrati (1560 – 14 February 1618). According to Britannica, Reni was later influenced by the novel naturalism of the Carracci, a family of artists: Annibale, Agostino and Ludovico.

Guido was soon recognized as a master. He was a painter to Pope Paul V (Borghese). We owe him many frescoes.­­

The mood of his paintings is calm and serene, as are the studied softness of colour and form. [2] 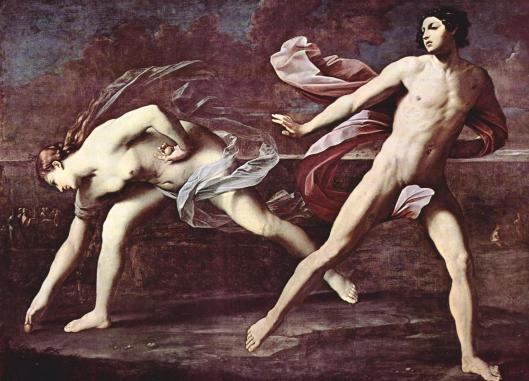 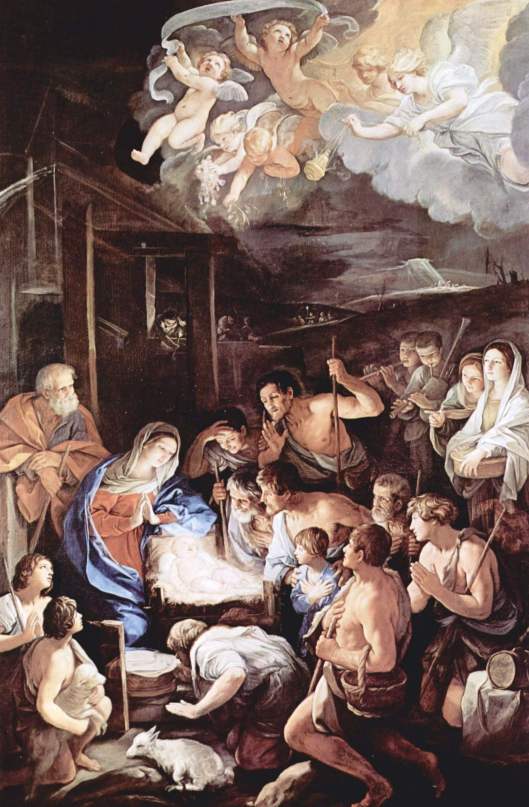 The Adoration of the Shepherds (Photo credit: WikiArt.org)

Guido went to Naples to complete a commission to paint a ceiling in a chapel of the San Gennaro, but it appears competitors attempted to poison him, which emphasizes his talent as an artist. In 1625, Polish Prince Władysław Sigismund Vasa visited Reni’s studio in Bologna, which led to the purchase by the Prince of several works by Guido Reno. Guido survived the plague of 1630 that claimed many lives in Bologna. He was then painting the Pallion del Voto “with images of St. Ignatius and Francis Xavier,” produced during the plague of 1630 that befell Bologna. (See Guido Reni, Wikipedia.)

Guido died in 1642 and is buried next to Elisabetta Sirani (1638 – 1665) in the Rosary Chapel of the Basilica of San Domenica. Elisabetta Sirani’s story is told by Germaine Greer, in chapter XI, entitled The Bolognese Phenomenon, of The Obstacle Race.[4]

My kindest wishes to all of you. 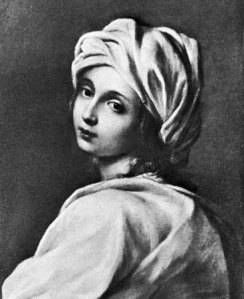