Leo Rauth’s depictions of Pierrot are rooted in the Fêtes galantes of eighteenth-century France. He is loved by Colombine and he has a floured face. He is a smidgen decadent and his costume, flowing, not baggy. This is a sign of the times. Rauth was a fin de siècle (end of century) artist and very much an aesthete. He produced stylized and very thin figures.

According to Britannica, the fin de siècle was characterized by “sophistication, escapism, extreme aestheticism, world-weariness, and fashionable despair.”[i] In other words, the “mal du siècle” had survived under such headings as “world-weariness” and “fashionable despair.” However, the Pierrot had acquired new facets. He was sophisticated and elegant. Symbolism had changed him. Leo Rauth’s Pierrot is both a sad and polished Pierrot, a “dandy,” and, perhaps, a salonnier.

Jean-Gaspard Deburau (31 July 1796 – 17 June 1846) gave Pierrot his “Janus-faced aspect.” (See Pedrolino, Wikipedia.) He made him into a sad clown. However, under his loose-fitting clothes, his impeccably starched ruff and his pompoms, Rauth’s Pierrot, formerly a zanno, a servant, had been transformed into a man-about-town, which does not preclude sadness. Rauth would bestow “fashionable despair” upon his Pierrot.

But the Pierrot is the Pierrot. We have read the scenario. His Columbina, featured at the top of this post, seems to love him. She is dancing with him. But Columbina loves the nimble Harlequin.

So, it was all a masquerade and the topsy-turvy world of the Roman Saturnalia and the Carnival season. On Shrove Tuesday, the bal masqué would end, but as depicted by Jean-Léon Gérôme (11 May 1824 – Paris, 10 January 1904), the end would not necessarily be consistent with the conventions of comedy. Gérôme’s (c. 1857-59) painting shows Pierrot wounded and perhaps dying after fighting a duel. On the right side of the painting, we see Harlequin walking away. He appears to be supporting another figure, which is confusing. 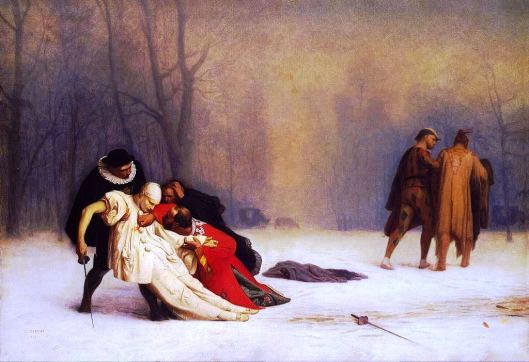 The Duel after the Masquerade by Jean-Léon Gérôme (Photo credit: Wikipedia)

Leo Rauth (18 July 1884 – 9 January 1913) was born in Leipzig and studied art in Karlsruhe, Berlin, Vienna, Paris and Venice. His art made him an overnight celebrity. He had obviously been influenced by Jean-Antoine Watteau (baptised 10 October 1684 – 18 July 1721) whose “best known subjects were drawn from the world of Italian comedy and ballet,” as would also be the case with Leo Rauth’s Pierrot. Watteau is also an important figure in the history of fashion. (See Watteau, Wikipedia.)

Leo Rauth died of a pistol shot at the age of 29. News of his premature death after a dizzying three-year career sent shock waves through artistic circles. He had chosen useful art and seemed destined for a brilliant career.

Rauth died, but the Pierrot survived. In 1913, Sergei Diaghilev‘s Ballets Russes were in Paris and Pierrot was on stage dancing, not far from Harlequin and Columbina. Moreover, a young Picasso was working for the Ballets Russes. Picasso would also remember the stock characters of the commedia dell’arte. However, he would choose Harlequin as a major subject matter. Could it be the cubes? We will see…

My best regards to everyone. ♥ 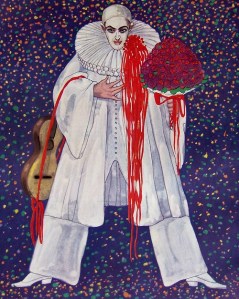 © Micheline Walker
26 June 2014
WordPress
(Please click on the image to enlarge it.)