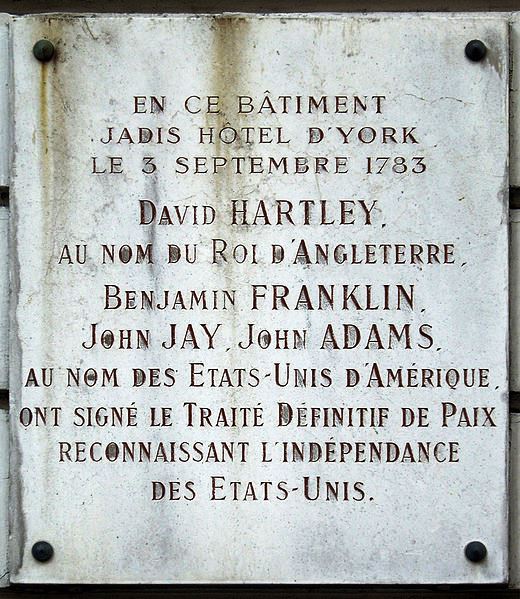 When the Treaty of Versailles was signed, in 1783, Thomas Jefferson had yet to assume his duties as United States Minister Plenipotentiary to France, an office now  known as that of Ambassador. Moreover, and ironically, France itself would not become a republic until 22 September 1792, and not under the best of circumstances.

The names engraved on the stone shown above are those of members of the American Delegation in Paris, architects of the United States of America:

It could be said that all parties gained from the Treaty of Versailles/Paris. The United States was an independent nation and Benjamin Franklin had made sure both France and England would be its trading partners. As for France, it had regained the prestige it lost when it ceded Canada to Britain under the terms of the Treaty of Paris, signed in 1673, but Canada remained a British colony. However, in 1783, Benjamin Franklin did glance northwards. The mostly French-language British Province of Quebec shrank significantly. Please see the maps.[i]

In May 1785, Thomas Jefferson (13 April 1743 – 4 July 1826), the 3rd President of the United States and a good friend of the Marquis de La Fayette, was installed as the United States Minister, or United States ‘Ambassador’ to France. Like his predecessor, Benjamin Franklin, Jefferson was a polymath who had read abundantly, played the violin, spoke several languages, but suffered violent attacks of migraine. He was a man of the Enlightenment and truly impressed the French, but not in the same manner as his predecessor, Benjamin Franklin, who was milling financial and military support for the American Revolutionary War, and did so as a “regular” in various French Salons and the Café Procope, major institutions in France, and importing racoon hats, “du nouveau,” something new, for the ladies of the French court and Salons. These ladies only wore the “trendy” and would not be caught otherwise. The French did however name Benjamin Franklin to the French Academy as an honorary member. As for Jefferson, his legacy would be one of the mind, to the French and to the world. I will not speak of his dependence on slaves.

Thomas Jefferson arrived in Paris in 1785 and left on 26 September 1789 in order to serve as the United States’ first Secretary of State, under George Washington (22 February 1732  – 14 December 1799). In other words, Jefferson left France a mere two weeks before Charles-Maurice de Talleyrand-Périgord, Prince de Talleyrand suggested, on 10 October 1789, that France resolve its financial crisis by confiscating the wealth of Church, which it did on 2 November 1789. During his stay in Paris, Jefferson was a witness to vain attempts on the part of Louis XVI to pay the huge debt accrued mainly because of wars it had fought, one of which was the American Revolutionary War. The American Revolutionary War was indeed a catalyst in the apocalyptic French Revolution. France had supported the future United States’ effort to break its ties with Britain. But who could have predicted a catastrophe that would ignore the liberalism of the Age of Enlightenment to persecute the clergy and the nobility, by killing thousands of its innocent citizens?

The American Declaration of Independence

Franklin was in France to rally the French to the American cause of independence from England. Such would not be Jefferson’s task. Given that he had drafted the American Declaration of Independence, a text reflecting the liberalism of John Locke, Thomas Jefferson’s main contribution to the French Revolution would be the lofty idealism he had contributed to the American Declaration of Independence, which he had drafted almost single-handedly. Jefferson was in a position to play an active role in the actual drafting of the French Declaration of the Rights of Man and the Citizen (Déclaration des droits de l’homme et du citoyen), a pivotal text in the history of France, written mainly by Jefferson’s friend, La Fayette, with assistance on the part of Thomas Jefferson, and issued on 26 August 1789, a month to the day before Jefferson left France to take up his duties as first American Secretary of State.

George Washington: the “Proclamation of Neutrality”

On 22 April 1793, after the execution of king Louis XVI (21 January 1793), George Washington issued a Proclamation of Neutrality. The United States declared it would remain neutral in conflicts between France and Great Britain and in Wars abroad. Americans breaking this rule could be prosecuted. (See Proclamation of Neutrality, Wikipedia.) Yet, the American Revolutionary War or American War of Independence, was a catalyst in the apocalyptic French Revolution. France had been the main financial and military supporter in the Americans’ effort to break their ties with Britain. But, again, who could have imagined a catastrophe that would ignore the liberalism of the Enlightenment and persecute the clergy and the nobility.

Therefore, would that the Parliament of Paris had ratified Charles Alexandre, vicomte de Calonne‘s proposal of imposing taxes across the board. Would, moreover, that the Assembly of Notables, created by Louis XVI, in 1787, had seen fit to implement universal taxation. Levying taxes from the First and Second Estates, the Church of France and its nobility, was the only solution to France’s financial crisis. Its participation in the American War of Independence cost France 1.3 billion livres.

In 1787, the Parliament of Paris refused to register Charles Alexandre, vicomte de Calonne‘s[ii] proposal to tax all three estates, the only way to remedy France’s desperate financial crisis. Louis XVI therefore created an Assembly of Notables, 144 individuals handpicked by him, whose duty it would be to save France from bankruptcy. The Marquis de La Fayette was a member of king Louis XVI’s Notables, but Louis’ élite team also refused across-the-board taxation. It was proposed, instead, that the matter of tax reform be handled by the Estates-General which had not convened since 1614.

To end this post, one could state that “the rest is history.” But it need be retold that, on 10 October 1789, Charles-Maurice de Talleyrand (and the Comte de Mirabeau) proposed that France confiscate the wealth of the Church and convert it into assignats: paper money, which was approved by the Assembly on 2 December 1789. Calonne’s proposal that all Estates be taxed turned into greater misery, the confiscation of the property of the Church of France. To harm the Church of France further, Talleyrand, a member of the clergy, l’évêque d’Autun (the bishop of Autun), also proposed the Civil Constitution of the Clergy, a law passed on 12 July 1790. The Civil Constitution of the Clergy did not separate separate Church and State, a separation proposed by the Baron de Montesquieu, among others. Laïcité was part of the programme of the Enlightenment, but the Civil Constitution of the Clergy subjugated the Church of France to the State, which  was not laïcité.

By 12 July 1790, Thomas Jefferson was no longer the American Minister to France. His mission terminated on 26 September 1789, as indicated above.

[i] The Treaty of Versailles (1783) and the Redrawing of the Canada-US Border (Site for Language Management in Canada [SMLC]).

[ii] Calonne was Louis XVI’s Controller-General of Finances. He was appointed to this office in 1783. Jacques Necker, however, remained in the background.

[iii] Here is the text (short) of Jefferson’s Declaration of Independence (just click). It completes the video.