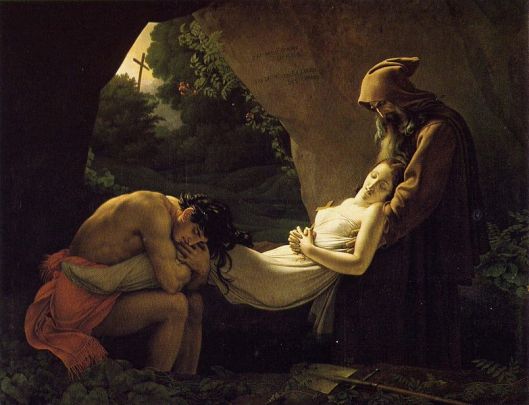 The Funeral of Atala, by Girodet, 1808 (Photo credit: Wikipedia)

In 1791, François-René, vicomte de Chateaubriand, an impoverished aristocrat fleeing revolutionary France, travels to America where he spends nine months an lives in  Philadelphia, Baltimore, New York and the Hudson valley. Born of this stay in America are Atala, René, Les Natchez and Voyage en Amérique, an EBook.

These works were written in England, as was L’Essai sur les Révolutions. Upon his return to Europe, Chateaubriand joined l’Armée des Princes (the Army of Princes) and, after being wounded in battle, he settled in England where he earned a meagre living teaching French mainly. Despite this painful exile, not only did François-René write the afore-mentioned works, but he also became familiar with English literature and, in particular, with seventeenth-century author John Milton‘s Paradise Lost (1667), a work Chateaubriand would later translate into French. (See Chateaubriand, Wikipedia)

Chateaubriand returned to France in May 1800 when an amnesty was issued émigrés. In 1801, he published Atala, and, the following year, René. Both novellas are incorporated in Le Génie du Christianisme (The Genius of Christianity), a large work published in 1802 and available online. In René, Chateaubriand described “le mal du siècle”[i] or, more precisely, the “vague [from vagueness] des passions,” the form of melancholy experienced by sensitive souls who know they are “fallen gods”  (Lamartine, see Le Mal du siècle). Their sorrows bestow superiority on such characters.

“Morbid sadness was mistaken for the suffering of a proud and superior mind.” (See Mal du siècle, Wikipedia.) 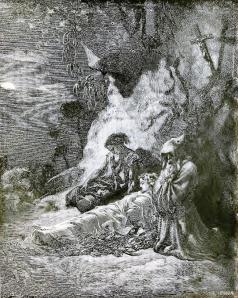 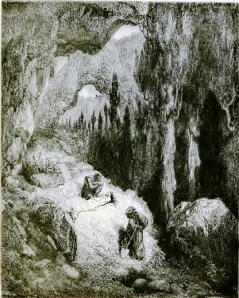 Atala, a novella, or short novel, was published in 1801, a year before René. However, although published in 1801, Atala features René, a Frenchman who left France in 1725 and found refuge among the Natchez. The Natchez are a tribe of Amerindians living near the Mississippi and friendly to the French. In Atala, they are near the Ohio River. Chactas could be a “noble savage,” but he is not depicted as such. He is a blind Sachem and a Natchez whose nobility seems to stem from the fact that he is not altogether a “savage.” In a later appearance, Chactas is in France and meets the king.

If Chactas has nobility, which he does, it is mostly because he was brought up by Lopez, the Spaniard who rescued him from the Muscogulges. Lopez also fathered Atala whose mother is a Muscogulge, enemies of the Natchez. Atala’s mother weds the tribe’s magnanimous leader, Simaghan. When Chactas leaves Lopez’ home, he is again captured by the Muscogulges. He is freed by Atala. At this point, le père Aubry, Father Aubry, its fourth (René, Chactas, Atala) and most eloquent character, enters the novella. 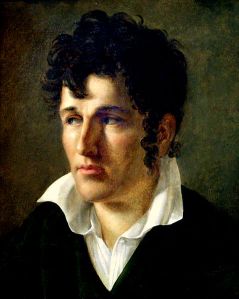 In Atala, Chactas, who has befriended René, tells him his story. After leaving the home of Lopez to rejoin his people, Chactas is captured by Muscogulge Amerindians who quickly prepare to torture and kill him. Kind Atala, a Christian, takes pity on Chactas. She has fallen in love with him and unties him so he can escape torture. The two flee the tribe’s encampment but are caught in a terrible thunderstorm. They then hear the sound of a bell and, suddenly, a dog approaches followed by Father Aubry, a French missionary.

Father Aubry takes Atala and Chactas to his grotto. The priest wants his protégés to wed. However, this prospect saddens Atala profoundly. Atala’s mother made a promise. Her child, Atala, was sick, so she vowed that if Atala survived, Atala would remain a virgin. On her deathbed, Atala’s mother extracted the same promise from Atala herself. Atala does not tell Chactas and father Aubry about her vow of chastity.

While Father Aubry and Chactas are visiting the mission, Atala takes poison. On their return, Chactas and father Aubry find Atala lying down, in agony. She tells her story and Father Aubry quickly explains that the oath she has made to her dying mother can be undone. But it is too late.

(O my mother, why spake you thus? O Religion, the cause of my ills and of my felicity, my ruin and my consolation at the same time!) (“Félicité,” felicity) means “bonheur” (happiness).

Ambivalence towards Christianity is expressed.  A grief-stricken Chactas is indignant and, after rolling on the ground in Amerindian fashion, he says: “Homme prêtre, qu’es-tu venu faire dans ces forêts ?” (Man-priest, why did you come into these forests?). “To save you,” replies the old man who shows considerable anger defending Christianity and then absolves Atala of her suicide. It is not a sin, because she did not know her suicide was a transgression. She is “ignorant.”

“[A]ll your misfortunes are the result of your ignorance. Your savage education and the want of instruction have been your ruin. You did not know that a Christian cannot dispose of his life.”

We then witness Atala’s agony, together with Chactas and le père Aubry. Atala dies but is buried discreetly at the “Groves of Death.” Later, Father Aubry dies when his mission is attacked by Cherokee Amerindians who torture him to death. He will be buried near Atala, and René will come to collect the bones of both Atala and Father Aubry.

Chateaubriand’s Savage: not so Noble

Note that le père Aubry is a white man and that “everything about him was calm and sublime.” Chactas was brought up by Lopez, a Spaniard and a Christian. Moreover, Lopez is Atala’s father. As for René, to whom Chactas told his story, he is a French émigré who moved to Louisiana in 1725. It would appear, therefore, that Atala’s savages are not altogether “savages.”

Atala was “proud” of her Spanish blood and “resembled a queen in the pride of her demeanor, disdained to speak to these warriors.” Until she met Chactas, she felt those “warriors” who surrounded her were not worthy of her. Je n’aperçus autour de moi que des hommes indignes de recevoir ma main; je m’applaudis de n’avoir d’autre époux que le Dieu de ma mère. (p. 53) (I saw myself surrounded by men unworthy of receiving my hand; I congratulated myself upon having no other spouse than the God of my mother.) Obviously, the natives Atala knows seem inferior to Europeans. Yet, the Natchez are René’s refuge. Could this be the case if Chateaubriand considered them irredeemably uncivilized?

Atala is a bittersweet chapter in the tale of the “Noble Savage.” Chateaubriand’s savage is not a noble savage, at least not consistently. In particular, he is extremely cruel. Savages, Iroquois, allies of the British, tortured and burned alive Jesuit missionary Jean de Brébeuf and other missionaries, in 1625. But Chateaubriand is among émigrés who escaped the savage Reign of Terror: 1793. Robespierre and company were barbarians.

However, the setting confers a degree of exoticism to Atala and it allows Chateaubriand feats of style. The Amerindians bring food to our Europeans and Chactas is dressed in bark, etc. It’s called “couleur locale” and it is all the more colourful since Chateaubriand was not closely acquainted with Amerindians.

It is difficult not to agree with Alfred de Musset that  “[t]he entire malady of the present century stems from two causes: the nation that lived through 93 [la terreur or the reign of terror] and 1814 [Napoleon’s defeat: the Battle of Paris] had its heart wounded twice. All there was is no longer; all that will be has yet to come. Seek nowhere else the secret of our ills.” (See Musset’s Confession of a Child of the Century, Preface by Henri Bornier of the French Academy, Project Gutengerg [EBook #3942].

Indeed, a “valley of misery” it is for René who lives in exile, as do all émigrés and will those Natchez, the Amerindians who had adopted René and have survived the destruction of their encampment, Father Aubry’s mission. They are leaving, carrying the bones of their ancestors. Leading the cortège are the warriors, and closing it, women carrying their newborn. In the middle are the older Natchez. There is nobility to these “savages.”

“O what tears are shed when we thus abandon our native land!—when, from the summit of the mountain of exile, we look for the last time upon the roof beneath which we were bred, and see the hut-stream still flowing sadly through the solitary fields surrounding our birth-place!”

The final paragraph of Atala is very revealing, and on these words, I will end this post.

“Unfortunate Indians!—you whom I have seen wandering in the deserts of the New World with the ashes of your ancestors;—you who gave me hospitality in spite of your misery—I could not now return your generosity, for I am wandering, like you, at the mercy of men; but less fortunate than you in my exile, I have not brought with me the bones of my fathers.” 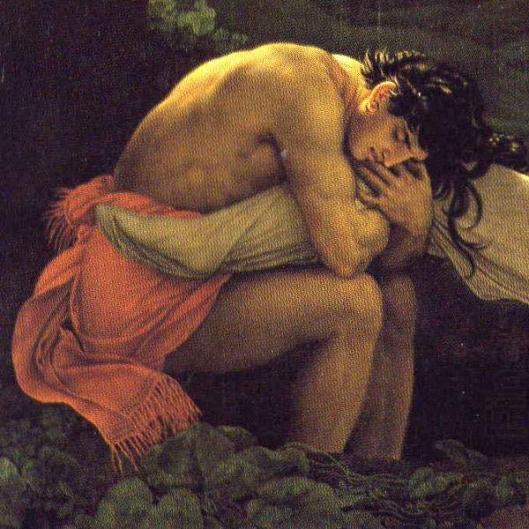 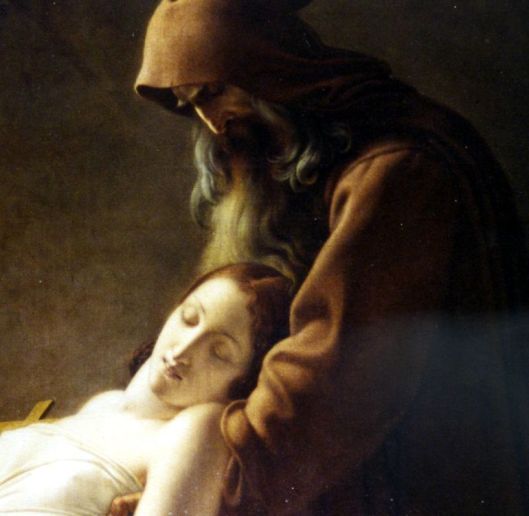