The Wanderer above a Sea of Fog, by Caspar David Friedrich, Kunsthalle, Hamburg (Photo credit: Wikipedia)

“This well-known and especially Romantic masterpiece was described by the historian John Lewis Gaddis as leaving a contradictory impression, ‘suggesting at once mastery over a landscape and the insignificance of the individual within it. We see no face, so it’s impossible to know whether the prospect facing the young man is exhilarating, or terrifying, or both.’”[i] (See Caspar David Friedrich, Wikipedia.)

This duality, “mastery” and “insignificance,” could explain the malaise called le mal du siècle (the malady of the century), a term coined by poet Alfred de Musset (11 December 1810 – 2 May 1857) in La Confession d’un enfant du siècle (The Confession of a Child of the Century), an autobiography published in 1836. Moreover, France entered the nineteenth century after a radical revolution that turned into a bloodbath. Yet the nineteenth century in France was inaugurated by the military victories of Napoleon. The  levée en masse, conscription, of 31 August 1793, had given Napoleon his grande armée.

Let’s take a closer look. Le mal du siècle[ii] is associated with François-René de Chateaubriand‘s René, a novella published separately in 1802, but also included, along with Atala (1801), in Chateaubriand’s Génie du Christianisme (The Genius of Christianity), published in 1802. It was also part of Les Natchez, a work written between 1793 and 1799, but not published until 1826. It is about René, a forelorn protagonist. Along with Atala (1801), it was conceived in America and written in Britain. Chateaubriand belonged to an aristocratic family and had to flee France during the French Revolution. He travelled to North-America, as did many émigrés, and then lived in England where he wrote abundantly. He left a superb narrative describing the Mississippi, the river he calls the Meschacebé and which he is unlikely to have seen.

René, the protagonist of René, is a sensitive young man who simply does not belong and whose mal is melancholy. The word melancholy all but summarizes “le mal du siècle,” also called “le vague des passions,” l’ennui (boredom), “spleen” (in Baudelaire). Chateaubriand has René say that he “lacked something to fill the void on his existence[:]”  “Il me  manquait quelque chose pour remplir l’abîme de mon existence[.]” René also says that man’s natural song is sad: “Le chant naturel de l’homme est triste.” In René’s opinion, “[o]ur heart is an incomplete instrument, a lyre missing strings” forcing us to express joy on the same tone as sighs:

A reader of Montesquieu, Madame de Staël, the author of De l’Allemage (Germany), 1810-1813, theorizes that northerners are more prone to melancholy than people born and living in sunnier environments. This theory is called “la théorie des climats” and, although it is expressed by Montesquieu, Charles-Louis de Secondat, Baron de La Brède et de Montesquieu (18 January 1689 – 10 February 1755), an early representative of the French Enlightenment, it dates back to Greco-Roman antiquity. Madame de Staël’s northerners would be German-speaking people, the inhabitants of the British Isles and, perhaps, the people of Brittany, France, a Celtic nation. These northerners are Romanticism‘s better recruits.

To a certain extent, René’s sadness is yet another expression of man’s duality. In “L’Homme” (Méditations poétiques, 1820), French poet Alphonse de Lamartine writes that “L’homme est un dieu tombé qui se souvient des cieux [.]” (Man is a fallen god who remembers heaven.) As Blaise Pascal (19 June 1623 – 19 August 1662) wrote, there is misère in the mortality of humans, but “grandeur” in the fact that humans know they will die. (Wo)man is a roseau pensant: a mere reed, but a thinking reed.

(Man’s grandeur is immense in that he knows he is miserable [a mere mortal]; a tree doesn’t know it is miserable.)

But René also suffers from a profound sense of alienation from the world and is therefore considered Werther’s French counterpart. Johann Wolfgang Goethe‘s Werther is the protagonist of The Sorrows of Young Werther (Die Leiden des jungen Werthers), an epistolary novel published in 1774, a quarter of a century before Chateaubriand’s René.

However, Werther has been associated, rightly or wrongly, with the Sturm und Drang movement (the late 1760s to the early 1780s). The Sturm und Drang (storm and stress) movement, named after a play by Friedrich Maximilian von Klinger (17 February 1752 – 25 February 1831), is characterized by the expression of “extremes of emotion,” and is not restricted to literature. It extends to music and the fine arts (examples are listed under Sturm und Drang, in Wikipedia).

The Sorrows of the Young Werther & René

Goethe (28 August 1749 – 22 March 1832); 1774 In Goethe’s Sorrows of the Young Werther, a bestseller, unrequited love or, love lost, often leads to melancholy, Werther falls in love with Lotte who is about to marry Albert, a man eleven years her senior. He therefore courts rejection. The plot is the classic love triangle. Lotte marries Albert and Werther commits suicide. Werther’s suicide is the expression of an “extreme of emotion.” He has invested his entire self in Lotte (see cathexis, Wikipedia). Chateaubriand (4 September 1768 – 4 July 1848); 1802

As for René, also a bestseller, there is no refuge for its protagonist’s melancholia. He visits the Natchez people in Louisiana, still a French colony, and travels to Scotland, the home Ossian. Ossian is an invented bard whose poetry is that of James MacPherson. René considers suicide, but finds a reprieve when he is joined by his sister Amélie, whom he loves. However, Amélie soon leaves him to enter a convent, her love for René being incestuous. René returns to America and is killed by a Natchez. Les Natchez can be considered an episode, or chapter, in the European discourse on the “Noble Savage.” However, Chateaubriand’s savage is not so noble.

There is no refuge for the Werthers and Renés. Romantics often perceived the world as mediocre and hostile which exacerbated the profound sadness called le mal du siècle. But romanticism can also be summarized as an age when sentiment prevailed over reason. It is a reaction against the Enlightenment. Beginning with René Descartes‘ (31 March 1596 – 11 February 1650) Discourse on Method (1637), reason had prevailed over sentiment.

The Reign of Sentiment

Therefore, it would seem to me that romanticism gives free rein to sentiment and subjectivity over reason. The reign of reason had been challenged by Blaise Pascal and otherwise assaulted, but it could be said that La Querelle des Bouffons, (The War of the Comic Actors) was reason’s major defeat (see Related Articles: Pergolesi). It is also a victory of the Modernes over the Anciens. Romantic authors and musicians revived the Medieval era, a Christian era. They sought their roots. The Brothers Grimm collected the folklore that gave German-speaking people their identity and Wagner gave them their glorious past. 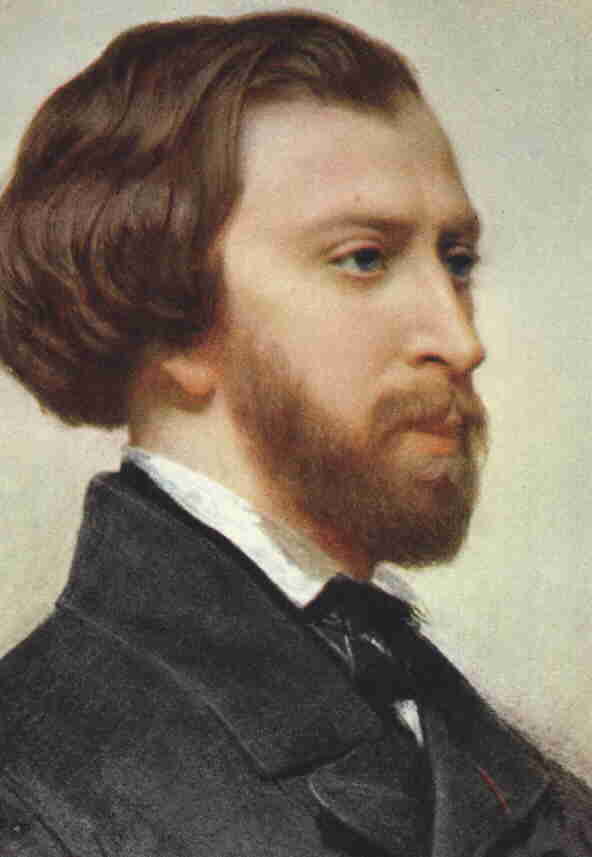 At a deeper level, these “extremes of emotion” may be an expression of man’s duality or the human condition. “Siècle” means both century and the world, or the secular and the profane. In his Confession d’un enfant du siècle, mentioned above, Alfred de Musset wrote that:

(The entire malady of the present century stems from two causes : the nation that lived through 93 [la terreur or the reign of terror] and 1814 [Napoleon’s defeat: the Battle of Paris] had its heart wounded twice. All there was is no longer; all that will be has yet to come. Seek nowhere else the secret of our ills.)

Such a definition applies to France, but the industrial revolution was no less traumatic than the French Revolution and Napoléon’s: defeat, i.e. 1814.

Humans have long been described or have described themselves as both tall and small. They combine a degree of “mastery” and “insignificance.” This theme underlies most of Western literature. John Milton‘s Paradise Lost tells that story. René’s mal du siècle, however, is also as described by Alfred de Musset. The French Revolution turned into the above-mentioned bloodbath: 93. The King was guillotined and its wealth was taken away from the Church. This was Talleyrand‘s[v] idea, a priest and a bishop. The vote took place on 10 October 1789. Priests fled to Britain.[vi] A new calendar was adopted. Yet, romanticism happened everywhere and, for many years, Madame de Staël‘s château at Coppet was its nucleus and Madame de Staël herself, a theorist of romanticism. Besides, the industrial revolution, a revolution greater than the French Revolution, was introducing the reign of machines that both empowered and lessened humankind, hence Weltshmerz, a term we owe Jean-Paul Richter. Le mal du siècle may well be the birthplace of l’absurde (see Absurdism, Wikipedia).