I would like to provide you with an overview of the history of 19th-century France. It has several insurrections and coups d’état. The first coup d’état took place on 19 Brumaire Year VIII, or 9 November 1799. It therefore precedes the nineteenth century by about six weeks. On 19 Brumaire, Napoleon I became First Consul and his government was the French Consulate. However, in April 1804, the French Sénat named him Emperor of the French, and he was crowned Napoleon I on 2 December 1804. Joséphine was crowned impératrice (Empress), by the new Emperor, her husband.

At the beginning of the 19th century, France was an unofficial Empire. As First Consul, Napoleon was the de facto ruler of France. He started rising to power during the National Convention (1792 – 1795) and continued empowering himself throughout the French Directory (1795 – 1799) as General Napoleon Bonaparte. The French Directory is identified as the third stage of the French Revolution.

The first stage of the Revolution begins with the meeting of the Estates-General of 1789. Significant events are:

The Revolution was radicalized (i.e. the King became an enemy) by the Flight to Varennes (June 1791). The Flight to Varennes was followed by the Declaration of Pillnitz (August 1791) and Brunswick Manifesto. The levée en masse (conscription of 23 August 1793) gave Napoleon and France a huge army.

After the monarchy was abolished, we reach the second stage of the French Revolution or the counterrevolution.

Although the French Sénat named Napoleon Emperor of the French, on 18 May 1804, Napoleon was a mostly self-proclaimed Emperor. He was crowned on 2 December 1804. He then crowned his Créole wife Joséphine impératrice. She kept that title when Napoleon married Marie-Louise of Austria.

Napoleon suffered severe losses during the French invasion of Russia (1812) and at the Battle of Leipzig, faught in October 1813. France was invaded and the First Empire, dissolved. In fact, the First Empire ended twice. It ended first on 4 April 1814,[i] when Napoleon I abdicated and was exiled to the Mediterranean island of Elba, off the coast of Tuscany. Napoleon escaped and he returned to power. This period of the Napoleonic Wars (1803 – 1815) is called the Hundred Days (111 to be precise).

The First Empire ended a second time, when Napoleon I was defeated at Waterloo, on 18 June 1815. After Waterloo, Napoleon was exiled to a distant island, Saint Helena, where he died of stomach cancer in 1821.

The First Empire was followed by the Congress of Vienna, the foremost social and political event of the nineteenth century, conducted before and after Napoleon I’s Hundred Days.

The main players were:

The decisions made in Vienna laid the groundwork for various insurrections and, ultimately, World War I. However, the Congress of Vienna was the first meeting of a united Europe or European nations seeking peaceful coexistence. (See Concert of Europe, Wikipedia.)

The Two Monarchies and Three Monarchs

Napoleon’s Hundred Days, his return from Elba, complicated the installation of Louis XVIII, portrayed above. What a lovely child!

Charles X undermined his reputation and popularity because of the Anti-Sacrilege Act (1825 – 1830) and because he proposed financial indemnities for properties confiscated during the 1789 Revolution (the French Revolution). His actions led to the July Revolution of 1830, when Louis-Philippe III (House of Orleans) was elected King of the French. 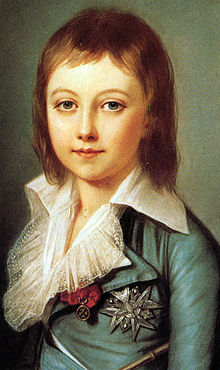 King Louis-Philippe I was deposed during the 1848 Revolution. In 1848, there were revolutions in many European countries, including France. In France, certain matters had to be settled: suffrage (who votes?); the right to employment, etc.

In 1848, Louis-Napoleon Bonaparte was the elected President of France, now a Republic. However, on 2 December 1851, Louis-Napoleon Bonaparte staged a coup d’état that transformed him into Napoleon I. He was the nephew of Emperor Napoleon I. Napoleon III and l’impératrice Eugénie, his wife, fled France after a Prussian victory at the Battle of Sedan, fought on 1 September 1870 during the Franco-Prussian War (19 July 1870 – 10 May 1871).

Napoleon II (b. Tuileries, 1811 – d. Vienna, 1832) was named Emperor by his father Emperor Napoleon I, on 4 September 1814, the day his father abdicated. He is titular (has the title of) Emperor, but never ruled France. He died at the age of 21, of tuberculosis.

Napoleon II (the Duke of Reichstadt) was born in Paris, in 1811, and died in Vienna, in 1832. His mother was Marie-Louise of Austria. French playwright Edmond Rostand wrote a 6-act play entitled L’Aiglon (the eaglet), a Project Gutenberg Publication [EBook #30012], based on Napoleon II’s life. The very famous Sarah Bernhardt was l’aiglon (produced on 30 March 1900) and the play was a success, but not as great a success as Cyrano de Bergerac (1897). The real Napoleon II was:

The Children of France

The above adds up to:

The Nineteenth century in France was an experiment in democracy. It was also a period of drastic changes. Feudalism survived until the French Revolution, so the 19th century was France’s Industrial Revolution. Previous forms of government were revisited, revealing tentativeness on the part of the French nation.

Some idealized the Monarchy (Gustave Flaubert‘s Madame Bovary  [EBook #2413]). However, in the 19th century, only Emperors resembled Absolute Monarchs; King Louis-Philippe III was elected King of the French. The Church of France had to rebuild. It’s wealth had been confiscated in the early days of the French Revolution, at the suggestion, on 10 October 1789, of Charles-Maurice de Talleyrand-Périgord,[ii] an ordained priest and a bishop.

4 thoughts on “The Nineteenth Century in France”