“It was not the over-sensitivity of the misunderstood that made me move to Paris… Over there, I paint only Canadian subjects, I dream only of Canada. The motif remains fixed in my mind, and I don’t allow myself to be captivated by the charms of a new landscape. In Switzerland, Scandinavia-everywhere, I recall my French Canada.”  (Clarence Gagnon)

I am republishing two posts that describe regionalism and the period when Quebeckers were leaving for the United States looking for employment.

Ringuet, or Dr Philippe Panneton, is the writer I am featuring.  He is the author of Trente arpents (Thirty Acres).  The novel was published in 1938, when the habitant had become a “cultivateur.”  Colonisation had ennobled his work.

You will note a considerable degree of acceptance.  The protagonist’s wife, Alphonsine, gives birth year after year, but her husband, Euchariste Moisan, sees the birth of children as Alphonsine’s inescapable fate.  She has to have “son nombre,” her number. Therefore, Euchariste is somewhat indifferent.  Yearly pregnancies and the death of children do not seem to affect him.  Life goes by as inexorably as the seasons.  Euchariste does not welcome changes: machines.

Euchariste also accepts the curé‘s, or parish priest, request.  He will contribute a son to the Church.  This was normal.  Whenever a child showed intellectual promise, he was chosen by the parish priest and eventually entered the Grand Séminaire.  Oguinase’s destiny is to become a priest.

Another son, Éphrem, is somewhat rebellious and is influenced by a relative who has left Canada for a more comfortable life in the United States.  This relative has even changed his name.

I have chosen this particular post as it documents the rise and fall of the habitant turned cultivateur.

So good morning to all or you. 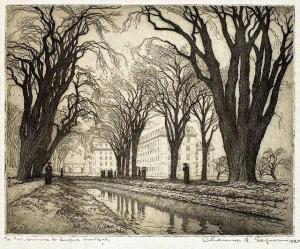