Both Harriet Beecher Stowe and Joel Chandler Harris were criticized for creating or perpetuating stereotypes concerning the Black in America. Yet, Harriet Beecher Stowe‘s Uncle Tom’s Cabin, made the evils of slavery known to millions of readers. As for Joel Chandler Harris‘ Uncle Remus stories, they were trickster stories that fascinate folklorists in that they were told by Uncle Remus but do not originate in African tales. Africans brought Anansi to the United States. These stories are spider tales and may be  ancestors to Spider-man.

Harriet Beecher Stowe‘s (14 June 1811 – 1 July 1896) is the author of Uncle Tom’s Cabin; or, Life Among the Lowly. When President Abraham Lincoln (12 February 1809 – 15 April 1865) met Mrs Stowe, he exclaimed: “so you are the little woman who wrote the book that started this great war.” (See Harriet Beecher Stowe, Wikipedia.) This was an exaggeration, but not by much.[i] According to the Oxford Companion to American Literature (sixth edition, 1995), Harriet Beecher Stowe was not an abolitionist, but it would be my opinion that Mrs Stowe played too significant a role in the abolition of slavery not to have been or become an abolitionist at heart.

In 1832, Harriet Beecher, Lyman Beecher‘s daughter, left Litchfield, Connecticut, where she was born and raised. She followed her family to Cincinnati Ohio and started to work as a teacher. While living in Cincinnati, Harriet Beecher took refuge in Washington, Kentucky because Cincinnati was afflicted with a serious cholera epidemic. There were slaves in Kentucky, chattel slaves mainly. During that visit to Kentucky, Harriet Beecher was taken to see a slave auction. This was her first exposure to slavery.  However, in 1836, she married Calvin Eliss Stowe (6 April 1802 – 22 August 1886), an American Biblical scholar who taught at Harriet’s father’s theological seminary, Lane, and was an ardent and active opponent of slavery. Mrs Stowe died in Hartford, Connecticut, her home for 23 years.

The Treatment of Slaves: the facts

“The treatment of slaves in the United States varied widely depending on conditions, times and places. Treatment was generally characterized by brutality, degradation, and inhumanity. Whippings, executions, and rapes were commonplace. According to Adalberto Aguirre,[ii] there were 1,161 slaves executed in the U.S. between the 1790s and 1850s. Exceptions existed to virtually every generalization; for instance, there were slaves who employed white workers, slave doctors who treated upper-class white patients, and slaves who rented out their labor. After 1820 [in the US, the slave trade was abolished in 1807], in response to the inability to import new slaves from Africa, some slaveholders improved the living conditions of their slaves, to influence them not to attempt escape.” (See Slavery, Wikipedia.)

A Ride for Liberty
Negro Life at the South

As for Stowe, the novelist, after reading Uncle Tom’s Cabin, many among her world-wide  “audience,” became abolitionists or were endeared to the cause of abolition. Literature and the arts in general, not to mention a good education, are powerful instruments of change. Uncle Tom’s Cabin was an instrument of abolition. It was a “story” with characters one could relate to and start loving. It spoke to the heart and was both a moment of grace and an instance of defiance.

Knowingly or unknowlingly, Harriet Beecher Stowe did join her husband who, as a member of The Underground Railroad, also defied the Fugitive Slave Act of 1850, a continuation of the Fugitive Act of 1793. There was a price to pay. Harriet Beecher Stowe’s father, a staunch conservative, came under attack because of his daughter’s book. However, there was praise. Stowe was received by President Abraham Lincoln (25 November 1862), three years before the Thirteenth Amendment to the Constitution of the United States and one year before Lincoln issued the Emancipation Proclamation (1st January, 1863). She was also received by Queen Victoria. Besides, whatever her perception of herself, Harriet Beecher Stowe’s Uncle Tom’s Cabin (1852) opposed, in no uncertain terms, the Fugitive Slave Law of 1850.

It’s a simple story. Uncle Tom is a slave who “belongs” to the Shelby family, who are ‘good’ slave owners.  Due to financial difficulties, the Shelbys are about to sell their slaves. Uncle Tom helps the mulatto girl Eliza and her child cross the frozen Ohio River. But he stays behind out of loyalty to his owners. He is sold to a slave trader and separated from his family. But young George Shelby vows to redeem him.

Going down the Mississippi, Tom saves young Eva’s life and her family, the St Clares, are  most grateful to Tom. They buy him and he becomes their servant in New Orleans. For two years, Tom is happy with Eva and her rather naughty Black friend Topsy.

However, happiness is short-lived. Eva is frail and dies. Then her father is killed accidentally. So Uncle Tom is auctioned off to the Legree family, ‘bad’ slave owners. Simon Legree is a brutal man who drinks to excess. However, he has found in Uncle Tom a forgiving slave and becomes more lenient, which makes him fear his slaves. Two of them make believe they have run away. Uncle Tom will not reveal Cassie’s and Emmaline’s whereabouts. In a fit of rage, Simon Legree has Uncle Tom flogged to death.

Uncle Tom still has a friend in George Shelby, but George arrives as Tom is dying. Unable to save Uncle Tom, George swears to devote his life to the abolition of slavery. He is true to the promise he made to redeem Uncle Tom. 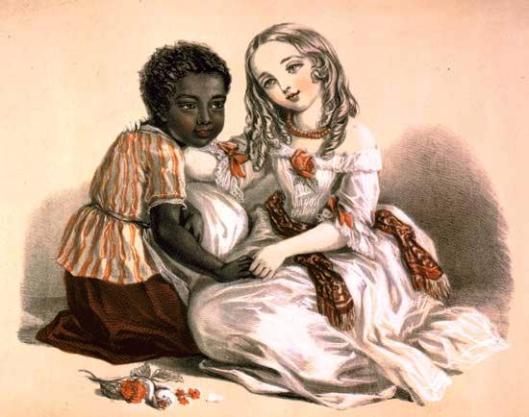 There may be ‘bad’ slave owners, but there are ‘good’ ones. The readers need only identify with the Shelbys and, particularly, with George who keeps his promise to redeem Uncle Tom. The readers may also identify with little Eva whose friend Topsy is a Black child. Although Eva is the daughter of a slave trader, she loves uncle Tom and plays with Topsy. There is, therefore, inherent goodness in Uncle Tom. He is a human being, endowed with moral superiority. He is loyal to the Shelbys and he tries to help Simon Legree. Moreover, although George Shelby arrives too late, George Shelby, who is good, knows that Tom is a fine man.  Had Uncle Tom not been dying, he would have been redeemed by his former owners. But the timing is wrong and one cannot fault timing. Bad timing is an accident and creates suspense, a favourite device in fiction. Uncle Tom dies, but it is one person’s fault, Legree, not a community nor the readers, except that slavery has made this horrifying death possible.

So there is an indictment of slavery in Uncle Tom’s Cabin; an unambiguous indictment. In this respect, Mrs Stowe does not waver. Uncle Tom is consistently at the mercy of “owners.” If a slave is purchased by a ‘bad’ slave owner, his or her fate can be an unjust and painful death. However, we can count on George to be victorious. He is a saviour figure. Mrs Stowe’s account of the plight of slaves is therefore nuancé. In fact, fate is portrayed as unkind, whatever the colour of one’s skin. The Shelbys are impoverished and little Eva’s health is so fragile that she dies.

In other words, Uncle Tom’s story is very sad and there is one very ‘bad’ man whose skin is white.[vi] So, despite gradations and many happy moments, Uncle Tom’s Cabin is about the wrongs of slavery. Uncle Tom is sold and he is killed as though his life meant nothing, which was precisely the case. In the days of slavery, the life of a slave meant nothing, which was and remains an infamy.

I will therefore close by repeating Abraham Lincoln’s words: “so you are the little woman who wrote the book that started this great war.” (See Harriet Beecher Stowe, Wikipedia.)