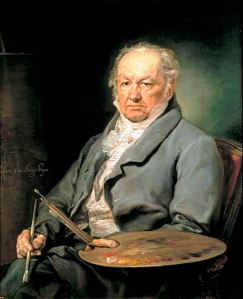 Please start the Video now.  Lustucru is the second song.

Lustukru (Lustucru) is a croquemitaine (a bogeyman), a folkloric and transcultural figure who eats up children still awake past bedtime.  Lustucru is el coco depicted by Francisco Goya, whose Tres de mayo 1808 (May Third 1808), 1814, and Desastres de la guerra, Los (The Disasters of War) constitute a haunting depiction of the horrors of war.

Théodore Botrel (14 September 1868 – 28 July 1925) is the composer of Le Grand Lustucru.  His greatest success was La Paimpolaise (The Girl from Paimpol).  At the height of his career, Théodore Botrel was associated with Aristide Bruant.  He sang in his cabaret, Le Mirliton.  However he performed mainly at the Chat Noir, a cabaret known because of Théophile Steinlen‘s cat posters, and at the Chien-Noir, a club.

This was Henri de Toulouse-Lautrec‘s Montmartre.

The translation of Le Grand Lustukru or Lustucru is mine.