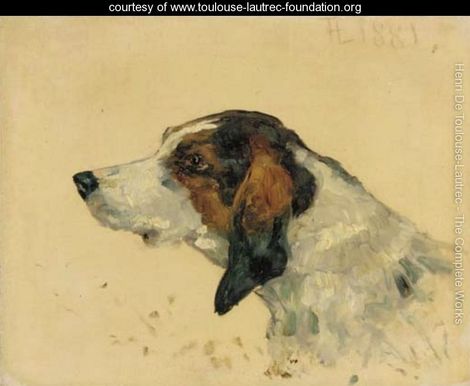 Most art lovers associate Edgar Degas with dancers and Toulouse-Lautrec (24 November 1864 – 9 September 1901) with le Moulin Rouge and can-can, Aristide Bruant‘s Mirliton and Le Chat noir, the main cabarets of a somewhat “decadent” fin de siècle, the end of the 19th century in France.  These images have left an indelible imprint on the memory of art lovers.

However, from time to time, I enjoy looking at many artworks executed by the same artist in order to see whether or not I will find an aspect of his or her legacy I had not noticed or paid attention to earlier.  For instance, although I knew that Japonisme had an immense impact on the art of Toulouse-Lautrec, I did not know to what extent he had been influenced by Edgar Degas (19 July 1834 – 27 September 1917).  Nor had I seen the horses!

Toulouse-Lautrec had art teachers.  The first one was René Princeteau, an animal artist or peintre animalier, and an acquaintance of Henri’s father.  His other teachers were Léon Bonnat and Fernand Cormon, “academicists.”  But when he rented a studio in Montmartre and became Montmartre’s chronicler, he produced artwork that differed substantially from the work of his teachers.  He made posters showing the Moulin Rouge, Aristide Bruant and the various entertainers of Montmartre.  Bruant was a colourful singer and composer and the cabaret he owned, the Mirliton, became a showroom for Toulouse-Lautrec.  Toulouse-Lautrec also illustrated Bruant’s songs and other songs.

Henri de Toulouse-Lautrec enjoyed painting people, including nudes, but like Degas, he did not embellish his models.  He painted people not necessarily as they were, but as he saw them, which excluded idealization and rule-governed art.

“Lines were no longer bound to what was anatomically correct; colours were intense and in their juxtapositions generated a pulsating rhythm; laws of perspective were violated in order to place figures in an active, unstable relationship with their surroundings.”[i]

“The Woman with a Tub” brings to mind Degas’ various depictions of bathers.  One cannot say that Toulouse-Lautrec’s portrayal of a woman pouring water into her tiny tub is flattering.  But it is fine genre painting, i.e. depictions of people going about their daily activities.  Toulouse-Lautrec’s portrayal of “Madame Palmyre with her Dog,” is a true-to-life ‘snapshot.’  As for “Woman at her Toilette,” it has long been a celebrated painting.  But no one is posing.

As for the Coffee Pot (1884), it is a somewhat unexpected subject matter for Toulouse-Lautrec, but it is a reassuring and familiar object.  Life unfolds a day at a time.