The Wind and the Sun: Æsop

The Wind and the Sun were disputing which was the stronger. Suddenly they saw a traveller coming down the road, and the Sun said, “I see a way to decide our dispute. Whichever of us can cause that traveller to take off his cloak shall be regarded as the stronger. You begin.”
So the Sun retired behind a cloud, and the Wind began to blow as hard as it could upon the traveller. But the harder he blew the more closely did the traveller wrap his cloak round him, till at last the Wind had to give up in despair.
Then the Sun came out and shone in all his glory upon the traveller, who soon found it too hot to walk with his cloak on.
Kindness effects more than severity.[i]

Gentleness does more than Violence

This seems a very innocent fable to which La Fontaine has given a lovely moral: “Plus fait douceur que violence.” (“Gentleness does more than violence.”)

“The North Wind and the Sun” is not so innocent a fable and it constitutes good advice to parents, to individuals who interact with other individuals, i.e. all of us, and to nations. It is the diplomatic approach. According to Wikipedia, South Korea’s Sunshine Policy was rooted in this Æsopic fable. I rather like Walter Crane‘s “True strength is not bluster.” (See The North Wind and the Sun, Wikipedia)

But in Wikipedia, one can also read a story according to which Sophocles (497/6 BC – winter 406/5 BC) asked a boy to have sexual intercourse with him. The boy did as he was told. He laid on his cloak but, after the act, he fled with Sophocles’ cloak which Sophocles had used to cover himself and the boy.[ii] Euripides (c. 480 – 406 BC), who had also engaged in sexual intercourse with the same boy, made a joke out of this event. The joke reached Sophocles who ridiculed Euripides in an epigram mentioning Euripides’ indiscretions with a woman other than his wife and alluding to the North Wind (Borée FR), and the Sun (Phébus FR).

It was the Sun, and not a boy, whose heat stripped me naked;
As for you, Euripides, when you were kissing someone else’s wife
The North Wind screwed you. You are unwise, you who sow
In another’s field, to accuse Eros of being a snatch-thief.[iii]

The above story is probably apocryphal. But given that Sophocles and Euripides, two dramatists, lived in the 5th century BCE, we know that “The North Wind and the Sun” is an old fable. Æsop lived in c. 620–564 BCE. This fable is probably of Eurasian provenance.

As for the illustrations, they provide us with a good example of anthropomorphism. The elements, the wind and the sun, are humans in disguise. They speak. 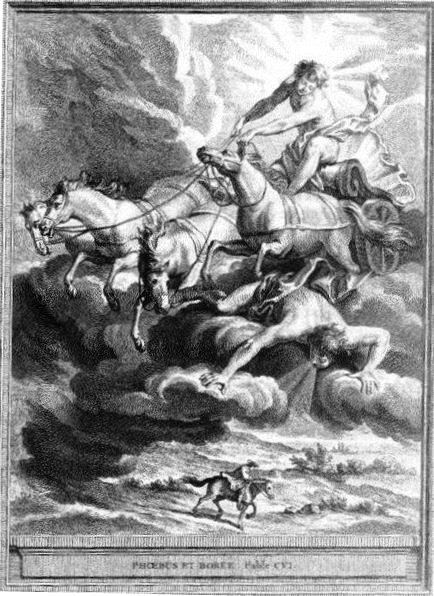