The Town Mouse and the Country Mouse, by Milo Winter, from
The Æsop for Children
(Photo credit: The Gutenberg Project [EBook #19994])
Classification
Texts

The Town and Country Mouse, by John Rae
Fables in Rhyme for Little Folks
(Photo credit: The Project Gutenberg [EBook #24108])

The Town Mouse and The Country Mouse

Style, rather than Subject Matter

There are folk tellings of this fable (the oral tradition), but when Jean de La Fontaine (8 July 1621 – 13 April 1695) wrote Le Rat de ville et le rat des champs (City Rat and Country Rat I. 9), The Town Mouse and the Country Mouse entered the learned tradition. According to the Encyclopaedia Britannica, La Fontaine’s Fables “rank among the greatest masterpieces of French literature.”[i]

However, the mostly Aesopic Town Mouse and Country Mouse entered literature long before La Fontaine was introduced to Æsop’s Fables. Horace (8 December 65 BCE – 27 November 8 BCE) could be credited with giving this folktale its literary status. It is one of his Satires (book 2, number 6, lines 77-115) and it resembles La Fontaine’s City Rat and Country Rat (1, 9). Interestingly, La Fontaine’s fable features two rats rather than mice. It would be my opinion that he chose to feature rats to embellish his fable. The word “rat” is shorter (one syllable or pied) than the word “sou-ris” (two syllables). Be that as it may, in both retellings of the narrative, the rustic mouse or rat decides to return to his humble but peaceful country life, when “a sudden banging of the doors” (Horace) forces our fellows to hide. Horace’s country mouse does not want to live in fear.

Then says the rustic: “It may do for you,
This life, but I don’t like it; so adieu:
Give me my hole, secure from all alarms,
I’ll prove that tares and vetches still have charms.”
Horace (scroll down to “One day…)

There have been many retellings of Aesop’s Fables, beginning with Roman fabulist Phædrus (c. 15 BCE – c. 50 CE).[ii] Aesop was also retold in Greek, by Babrius. As for The Town Mouse and the Country Mouse in particular, it appears we owe its dissemination throughout Europe to 12th-century Anglo-Norman writer Walter of England‘s translation of the fable into Latin.[iii] Fabulist Odo of Cheriton[iv] (c. 1185 – 1246/47, Kent) also contributed to the spread of the fable to various European countries.Spanish author Juan Ruiz inserted a Town Mouse and Country Mouse in his Libro de Buen Amor or Book of Good Love. Walter of England may also have inspired several manuscript collections of Æsop’s fables in Italian, including the Esopi fabulas by Accio Zucca. (See The Town Mouse and the Country Mouse, Wikipedia)

La Fontaine, however, seems to have drawn his material from Swiss writer Névelet whose Mythologia Æsopica Isaaci Nicolai Neveleti was published in Frankfurt in 1610. Névelet was La Fontaine’s usual source. Moreover, given his knowledge of Latin and resemblances between the two texts, we can assume La Fontaine was familiar with Horace’s The Town Mouse and the Country Mouse. In both fables, our two country fellows, a rat and a mouse, flee when they hear “fearful knocking” at the door (La Fontaine).

D. L. Alishman gives us a list of retellings of the Æsopic Town Mouse and Country Mouse: 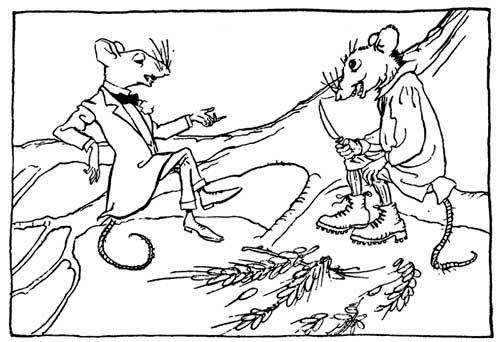 The Town Mouse and the Country Mouse, by Arthur Rackham, 1902
(Photo credit: The Project Gutenberg [EBook #11339])

La Fontaine’s The City Rat and The Country Rat

A city rat, one night,
Did, with a civil stoop,
A country rat invite
To end a turtle soup.
On a Turkey carpet
They found the table spread,
And sure I need not harp it
How well the fellows fed.
The entertainment was
A truly noble one;
But some unlucky cause
Disturbed it when begun.
It was a slight rat-tat,
That put their joys to rout;
Out ran the city rat;
His guest, too, scampered out.
Our rats but fairly quit,
The fearful knocking ceased.
“Return we,” cried the city,
To finish there our feast.
“No,” said the rustic rat;
“Tomorrow dine with me.
I’m not offended at
Your feast so grand and free,
“For I have no fare resembling;
But then I eat at leisure,
And would not swap, for pleasure
So mixed with fear and trembling.”
La Fontaine (I.ix) or (I.9)

Variants listed above by D. L. Alishman differ from one another. For instance, in some retellings of the Town Mouse and Country Mouse, a cat, rather than dogs or a noise at the door, scares the mice away. But the moral of the fable is almost the same in all its retellings, that moral being that it is best to eat more frugally if the cost of eating finer and more abundant meals is a source of endangerment. Neither the country mouse nor the country rat want to eat watching their back. I like the wording Odo of Cheriton has given the moral of his Town Mouse and Country Mouse:

“I’d rather gnaw a bean than be gnawed by emotional fear.”

La Fontaine’s City Rat and Country Rat could be considered as “philosophical,” or meditative, which the word “philosophical” meant in 17th-century France. For example, this fable could describe the fate of aristocrats under absolutism. After the Fronde (1648-1653), Court was no longer a “natural” environment for aristocrats who nevertheless spent a great deal of money to keep a house and carriage near Versailles. They hoped to be noticed and, consequently, be invited to attend the king’s lever (getting out of bed) and coucher (getting into bed). But Louis XIV feared aristocrats and would not give them power.  Therefore, their best option was to return to their home away from Versailles and its intrigues, which they seldom did.

However, as told by La Fontaine, the fable does not reflect in any direct way the circumstances of French aristocrats after the Fronde (1648 and 1653).

But his chief and most comprehensive theme remains that of the traditional fable: the fundamental, everyday moral experience of mankind throughout the ages, exhibited in a profusion of typical characters, emotions, attitudes, and situations.[v]

Come down, go home with me: remember, all
Who live on earth are mortal, great or small:
Then take, good sir, your pleasure while you may;
With life so short, ’twere wrong to lose a day.
Horace, Satires, book 2, no. 6, pp. 84-86

The Town Mouse and the Country Mouse can be read at several levels.It is a palimpsest.  Surprisingly, fables often possess an unsuspected depth, especially if they have an Eastern origin, which is the case with many of Aesop’s fables and fables published in La Fontaine’s second collection of fables (1678). According to Wikipedia’s entry on The Town Mouse and the Country Mouse, it resembles a fable by Bidpai entitled The Lean Cat and the Fat Cat (The Baldwin Project). La Fontaine’s second collection of fables (1678) was written after he had read the Fables of Bidpai, published in France as the Livre des lumières ou la Conduite des roys, 1644). La Fontaine’s second collection, five short books, therefore reflects an Eastern source.

However, La Fontaine’s one wish was to create little comedies.

But the predominant note is that of la gaieté, which, as he says in the preface to the first collection, he deliberately sought to introduce into his Fables. “Gaiety,” he explains, is not that which provokes laughter but is “a certain charm . . . that can be given to any kind of subject, even the most serious.”[vi]

La Fontaine was a loyal friend, but he was not a crusader. He knew from experience that “might is right.” He had been a protégé of disgraced Nicolas Fouquet, the Superintendent of Finances in France from 1653 until 1661. Consequently, although La Fontaine’s fables have depth, the language he uses is light-hearted.

To the grace, ease, and delicate perfection of the best of the Fables, even close textual commentary cannot hope to do full justice. They represent the quintessence of a century of experiments in prosody and poetic diction in France.[vii] 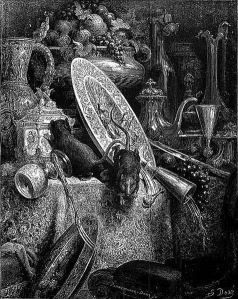 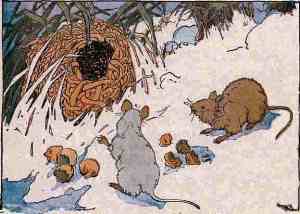 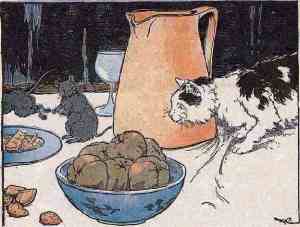 The Town Mouse and the Country Mouse
(Photo credit: The Baldwin Project) 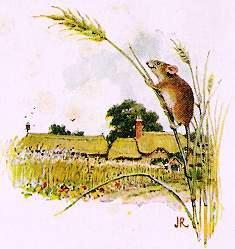 4 thoughts on “The Town Mouse and the Country Mouse”