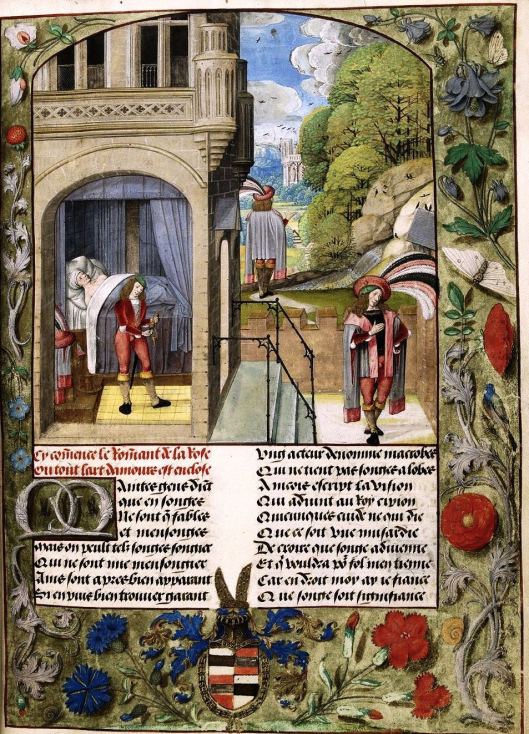 The Beginning of the Dream

Photo credit: The British Library Harley MS 4425
(Please click on the small images to enlarge them.)

With Richard de Fournival ‘s (1201- ?1260), we are entering a new tradition in illuminated manuscripts, an allegorical depiction of courtly love, a term popularized by Gaston Paris in 1883. As a result, before examining Fournival’s Bestiary of Love, courtly love should be defined and exemplified. Its pinnable is Le Roman de la Rose, an allegorical poem in octosyllabic (eight syllables) verses. Moreover, both Richard de Fournival’s Bestiaire d’amour are “allegorical.”

In 1816, in an article published in the Journal des Savants, a critic [M. Renouard] wrote that:

“The Romance of the Rose is one of the most remarkable monuments to our old poetry. Because of its success and its renown, it once exerted a great deal of influence on the art of writing and on manners. It has long been admired excessively and criticised severely. However, it earned a fair share of the praise it attracted as well as the criticism it generated.” (Quoted in the Gutenberg edition of the Roman de la Rose)

The Romance of the Rose

*In France and French-language countries, the Greek words are used

We will glimpse the Roman de la Rose, an octosyllabic poem, using mainly the British Library’s MS 4425 (scroll down to see the images), a rich source of images, and the Roman de la Rose Digital Library, a project of Johns Hopkins University and the Bibliothèque nationale de France (Hopkins/BnF). There are some 300 extant manuscripts of the Roman de la Rose, some of which are an incunabula, i.e. printed between 1450 and 1502.  The Harley Manuscript (British Library) was commissioned by Engelbert II, count of Nassau and Vianden (d. 1504) and is an illuminated manuscript, copied from an incunable.

The Romance of the Rose: illuminations

The Harley MS 4425 was illuminated by a Flemish artist known as Master of the Prayer Books. By clicking on Narrative Sections and then on ID (Hopkins /BnF), folios will also appear. These were selected from various extant manuscripts (some 300) of the Roman de la Rose. In other words, our two main sources are:

The finest Rose manuscripts were commissioned and owned by aristocrats and members of the French royal court. The Harley Manuscript (British Library) was made for Engelbert II, count of Nassau and Vianden (d. 1504). As for the Douce 195 manuscript, it was probably made for Louise de Savoie (1476-1531), the countess of Angoulême and regent queen of France (r. 1515-1516).

Guillaume de Lorris knew Ovid, which gives us the main source of his art of love. As for our narrator, the Lover, he is 25 years old and tells about a dream. In his dream, he enters a garden and is attracted to a particular rose. It is a walled garden and it belongs to Déduit (Pleasure) who is surrounded by Liesse, Joy, Dieu d’Amours, the God of Love, his servant Doux Regard, who looks at people sweetly, Beauté (Beauty), Richesse, who is rich, Largesse, who is generous, Franchise, who speaks the truth, Courtoisie, who behaves in a courtly manner, Oyseuse, idleness, Jeunesse, youth, and Amant (the Lover).

According to the conventions of courtly love, “the God of Love [shoots] him with several arrows, leaving him forever enamored of one particular flower.” (See Rose Summary, Roman de la Rose Digital Library.) The rose symbolizes female sexuality and the Lover’s attempts to reach her are either encouraged or thwarted by various allegorical characters. Our narrator cannot take Rose. He tries to steal a kiss from her but the guardians of Rose enclose it/her in stronger fortifications. In this part of the Roman de la Rose, the rules of courtly love are set and given that at the end of Guillaume de Lorris’ part of the Roman, Rose is enclosed in a fortress, Rose (the beloved woman) is well nigh unattainable.

Lover is helped by Faux Semblant (Slander, usually disguised as a mendicant friar [a begging monk]), and by Amour who overcome Male Bouche. However Raison (reason) discourages Lover, but is opposed by Nature. Venus drives away Danger, Shame and Fear.

Rose is imprisoned in the castle of Jealousy (Jalousie), closely guarded by a duenna. The duenna is won over to the lovers’ cause and Lover obtains Rose. The siege is over.

Various stories are inserted in the main story, as this can be seen in the video. We have at least two suicides.  We need not dwell of these digressions in this post, except to say that they act as smoke screens. The main message Jean de Meun is conveying is that Nature is love’s most powerful ally. The digressions, however, are a criticism of hereditary nobility, magistrates and mendicant friars. Royal power is discussed as are property, pauperism, marriage, hallucination, sorcery and the physical sciences. There are satires on women who glorify the poetry and songs of the troubadours (the south of France) and trouvères (the north of France), proponents of chaste love and, therefore, precursors to seventeenth-century préciosité, or love disembodied.  Chasteté (Chastity) militates against procreation and must be tamed.  (See Oxford Companion to French Literature.)

According to the Oxford Companion to French Literature, in the Roman de la Rose, “everything that is contrary to nature is vicious and this is the criterion by which social institutions may be judged. By this we may determine true nobility, true wealth, and true love.”[iii] Therefore Le Roman de la Rose, the summit in courtly literature, advocates real love as opposed to an ethereal version thereof. Through its various digressions it also attacks power and wealth that are a mere accident of birth and therefore unearned.

The dream, the allegorical nature of the poem and its digressions are ways of saying yet concealing what must be said. It is the dire-sans-dire (literally, saying without saying) of talking animals. Animals do not talk and a story is a mere story, particularly if it is enclosed in another story. The Roman de la Rose was attacked by Italian-born Christine de Pizan (1364 – c. 1430), a “feminist,” and Jean Gerson (13 December 1363 – 12 July 1429), the Chancellor of the University of Paris who “warn[ed] against the irreverent Roman de la Rose of Guillaume de Lorris and Jean de Meun,” in his Tract. contra romantiam de rosa (iii. 297).  (See Jean Gerson, Wikipedia.)

The Roman de la Rose therefore constitutes the beginning of a long discourse on the social contract and therefore “irreverent” in its days, but it was a literary success that kept artists and scribes busy for a very long time. The poem was in the library of most persons of means. 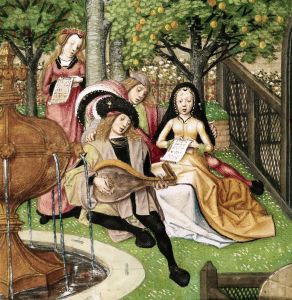