Tiger (Folio 12v).  A mother tiger is distracted by a mirror in which she thinks she sees her stolen cub, while the hunter escapes with the cub.  (Photo credit: The Medieval Bestiary)
Online Manuscript:
http://treasures.bodleian.ox.ac.uk/The-Ashmole-Bestiary

First, I must apologize.  My post on the Aberdeen Bestiary had lost several paragraphs when I published it.  I did not notice that my text was incomplete until later in the day.  I have now rewritten the missing paragraphs and have posted my article again.

The current post deals with the Ashmole or Ashmolean Bestiary (the two names are used) and it is believed that it was illuminated by the same artist as the The Aberdeen Manuscript which originated in England and was probably illuminated in Lincolnshire or Yorkshire.  But, the current post also contains information regarding the history of books.

The Story of Books

The Parchment: sheepskin, goatskin and calfskin

Woman holding wax tablets in the form of the codex. Wall painting from Pompeii, before 79 D.

Both the Aberdeen and the Ashmole manuscripts are codices, the plural form for codex.  Codices are books as we know them, i.e. we go from page to page sequentially.  However, the binding used in the Middle Ages was of better quality.  The pages were connected to one another using a thread.  Some illuminated manuscripts were left unbound so one could see the illuminations in full.  But, the pages were eventually bound together, which had one important advantage: pages could not be stolen.  The Aberdeen Bestiary has incisions, i.e. someone cut out part of certain folios (feuilles, leaf).  That’s unfortunate, but we at least know that part of the page is missing.  How can we tell when the entire page has been taken away?

Codices contained sequential folios (leaf, page), which was not the case when books were written as scrolls.

« The Joshua Scroll », Vatican Library, example of an illuminated scroll, probably of the 10th century, created in the Byzantine empire (Photo credit: Wikipedia)

The Codex and the Scroll: volumen, rotulus & recto-verso

Codices (the codex) were introduced in Late Antiquity and continued developing until the Middle Ages.  The scroll was probably replaced by the 6th century AD.  Scrolls were read from side to side (volumen) or from top to bottom (rotulus).  Ironically, when we read information on the internet, we use the scroll!

According to Wikipedia, “The scholarly study of these manuscripts from the point of view of the bookbinding craft is called codicology; the study of ancient documents in general is called paleography.”  (Codex, Wikipedia.)

There was a time, moreover, when only one side of the folio (the page) was illuminated and written on (calligraphy).  In other words, the sequential codex did not have a recto-verso.  The terms Recto and Verso predate the printing-press.  (Recto and Verso, Wikipedia.)

The Ashmole Bestiary is a an early Gothic (Christianized) manuscript.  By and large, it features animals that cannot be found in Europe, except for a few.  As we know, Bestiaries provided depictions of mythical and mythological, or both, animals.  In the case of real animals, information was often obtained from the written accounts of travelers to foreign lands.  Such accounts did not provide artists with information that could lead to accurate portrayals of various beasts, a case where the proverbial “picture is worth a thousand words” applies.  Short of a picture, a tiger might not look like a tiger.

I should think, however, that former portrayals of exotic animals often sufficed.  If literature is written in the context of literature (intertextualité), the same is probably true of animal lore, which is illustrated literature.

All bestiaries are derived from the Physiologus and from other rather old descriptions of animals.  The authors of these descriptions have been listed: Isidore of Seville, Gaius Julius Solinus, Claudius Aelianus or Aelian, or earlier historians, mainly: Pliny the Elder, Aristotle and Herodotus.  This is not a complete list, but I believe that providing other sources would be overwhelming and a little redundant.  Moreover, my post would be too long.

You may wish to look at Gothic art, which is the art associated with Cathedrals such as Notre-Dame de Paris and certain scripts used in Bestiaries.  Gothic art followed Romanesque art, starting in the mid 1200s and was followed by Renaissance art.  These are large categories, but I have always found it useful to begin with large categories.  It simplifies the presentation of most subjects.  The rest follows naturally.  There will be, of course, an early Gothic and a late Gothic.

There are a few more points I wish to discuss concerning illuminated manuscripts.  I have not discussed Richard de Fournival’s Bestiaire d’Amour.  We may also wish to look at what was happening at the court of Eleanor of Aquitaine (1122 or 1124 – 1 April 1204).

(Please click on the images to enlarge them.  It should work.)
(Photo credit:  The Treasures of the Bodleian [above image] & The Medieval Bestiary [4]) 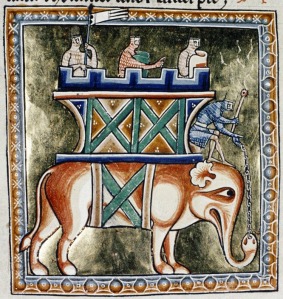 Folio 78v: Treasures of the Bodleian (Dragon strangling an elephant.)
Folio 15v: Elephant (An elephant with a chain through its trunk carries a castle full of soldiers on its back.)
Folio 18r: Bonnacon (The hunters have come prepared with shields, so the bonnacon’s primary weapon has failed to save it from the spear.)
Folio 15v: Griffin (A griffin has caught an unfortunate pig.)
Folio 71r: Swan (The swan sings sweetest when it is about to die.)
Camille Saint-Saëns  (9 October 1835 – 16 December 1921)
Le Carnaval des animaux  (Le Cygne/The Swan) 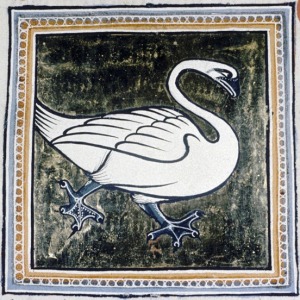 9 thoughts on “The Ashmole Bestiary”