The Unicorn (F15r) the Aberdeen Bestiary

Bestiaries are allegorical illuminated manuscripts in which animals, plants and stones are therefore given a symbolic meaning. Bestiaries differ from Books of Hours and other illuminated manuscripts in that they are not devotional or liturgical in meaning. However, they are moralizing in tone and reflect the ideology of early Christianity. As indicated in Wikipedia’s entry, three days after their death, pelicans give their very blood to bring back to life their dead offsprings, just as Christ rose from the dead three days after his crucifixion, a martyrdom and death he suffered to redeem flawed and sinful humanity.

Other and older sources are:

Although the treatises of these gentlemen imposed a meaning on animals, they were not necessarily discussing real animals.  In fact, among the animals featured in Bestiaries some do not exist or have a poetical reality: the unicorn, the phœnix, the dragon and the griffin are legendary animals and at least two, the unicorn and the dragon are cross-cultural beasts and two of which straddle the mythical and the mythological: the griffin and the phœnix.  The others, such as the mythological Centaur, half man, half horse and, therefore, a zoomorphic as well as a mythological animal.  In fact, even “real” animals have fantastical attributes. “Real” bears do not lick their cubs into shape.

However, there is a sense in which Christ in Majesty (F4v) belongs to a bestiary.  The mythologies I am familiar with all feature Creation tales.  Amerindians believed in a Manitou  and the Haida Amerindians of the northwest Pacific Coast carve(d) totem poles that suggested animal ancestry, which may point to a belief in evolutionism, except that, as I have already mentioned, Amerindians also had a Manitou (as in Manitoba).  These totem poles were at times so beautiful that patrons commissioned Totem poles as Jean de France (30 November 1340 – 15 June 1416) commissioned his Très Riches Heures.  (See Totem poles, Wikipedia.)

The Paper: Parchment, but not vellum (calfskin)

The Aberdeen Bestiary (Aberdeen University Library, Univ Lib. MS 24)[i] is a 12th century English illuminated manuscript bestiary.  It was first listed in 1542 in the inventory of the Old Royal Library at the Palace of Westminster in 1542.  (See Aberdeen, History.)  It was made on parchment (parchemin), which means that the paper used by the artists and scribes was probably sheepskin or goatskin.  Although calfskin is called parchment, vellum (calfskin) is the superior parchment, and when vellum is used, the paper is called vellum. This does not lessen the quality of the Aberdeen Bestiary.

From the Old Royal Library to the Aberdeen University, via Thomas Reid

The history of the illuminated manuscript is somewhat mysterious.  According to scholars and researchers involved in the Aberdeen Project, the manuscript was listed as No 518 Liber de bestiarum natura in the inventory of the Old Royal Library, at Westminster Palace (1542). This library was assembled by Henry VIII (28 June 1491 – 28 January 1547), with the assistance of antiquary John Leland, to house manuscripts and documents rescued from the dissolution of the monasteries. However, the manuscript may have been part of the royal collection. Many books “escaped” from the Royal Library. (See Aberdeen, History.)

When the Library was catalogued by Thomas Gray in c. 1670, the Aberdeen Bestiary was called Isidori physiologia, which suggests that many descriptions of animals were borrowed from Isidore of Seville rather than the compiler of the Physiologus. Isidore of Seville is the author of several books, the most famous of which is the Etymologiae, 184,[iii] “an encyclopedia of all knowledge.” (See Aberdeen, History.)

The Artist or Artists and the Patron

The Artist or artists: The Ashmole or Ashmolean Bestiary

We do not know who illuminated the Aberdeen Bestiary, but experts believe that the miniatures of the Aberdeen Bestiary were painted by the same artist, or artists, as the miniatures that adorn the Ashmole Bestiary.  The Ashmole Bestiary[iv] (Bodleian Library [Oxford University] MS. Ashmole 1511) is a late 12th or early 13th century English illuminated manuscript Bestiary containing a creation story and detailed allegorical descriptions of over 100 animals.  The anonymous artist probably lived near his patron, in Lincolnshire or Yorkshire.

As for the Patron of MS 24, the Aberdeen Bestiary, he is believed to have been an ecclesiastic on the basis of F32r (turtle doves), F34r (cedars of Lebanon). It seems our patron was Geoffrey Plantagenet, the illegitimate son of King Henry II and therefore half-brother to Kings Richard and John. Geoffrey Plantagenet was Bishop-elect of Lincoln (1173-82) and later Archbishop of York (1189-1212). Moreover, he owned the St Louis Psalter (Leiden U.L. MS 76A), which means he was wealthy. Luxurious illuminated manuscripts were usually commissioned by members of royal families.

When I discovered the Aberdeen Bestiary site, I felt I should perhaps refrain from writing a post on this famous bestiary.  A few  Aberdeen Bestiary illuminated folios are online. They can be investigated at leisure but images posted on the Bestiary cannot be used without violating copyright legislation. Fortunately Wikipedia has a site containing a good selection of the Aberdeen Wiki Commons.

There was an exceptional interest for animal fables and beast epics beginning with the publication of Nivardus of Ghent’s 1148 or 1149 Ysengrimus.  The Ysengrimus (6,574 lines of elegiac couplet) is Reynard the Fox ‘s birthplace. Reynard is called Reinardus and his foe, the wolf, Ysengrimus. In Reynard the Fox, they become Reynard and Isengrim (Renart and Ysengrin [FR]).  However, although the animals inhabiting medieval Beast Epics and Fables are anthropomorphic, i.e. humans in disguise, the wolf looks like a wolf and the fox, like a fox.

However, in illuminated Bestiaries not only are animals fanciful, but they are often grotesquely obscene.  In fact, when I was a student, the various Reynard the Fox beast epics were not even mentioned in the curriculum. Nor were Bestiaries.  If one visits Beverley Minster, in Beverley (Yorkshire), one wonders whether parents should allow their children to see the cathedral’s misericords. I was copiously entertained, but I was also busy looking up members of my husband’s ancestors several of whom have found their final resting place in Beverley Minster.

Bestiaries were commissioned by the wealthy for the wealthy and were not intended  for children. Children were probably told children Æsop’s fables as these passed down from generation to generation in an oral rather than learned (written) tradition. In fact, bestiaries circulated in courtly milieux next to the Roman de la Rose, c. 1230, part of which Chaucer translated into English. Let us pause here.

I cannot copy images from the Aberdeen Library site as I would be in violation of copyright laws.  But you may see the illuminated manuscripts by clicking on Bestiary.ca.  However, images are available at the above-mentioned Aberdeen Wiki Commons, Wikipedia.  (Also see the the top of this post.) 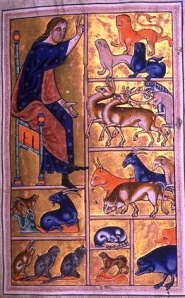 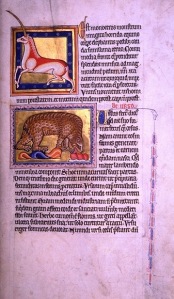 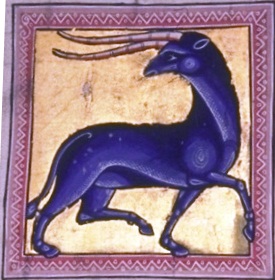 6 thoughts on “The Aberdeen Bestiary: a Medieval Bestiary”