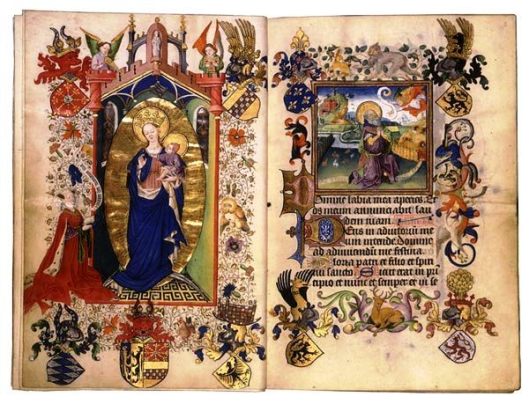 Opening from the Hours of Catherine of Cleves, c. 1440, with Catherine kneeling before the Virgin and Child, surrounded by her family heraldry. Opposite is the start of Matins in the Little Office, illustrated by the Annunciation to Joachim, as the start of a long cycle of the Life of the Virgin.  (Photo credit: Wikipedia)

The “Liber Usualis” & Books of Hours

Books of Hours are a secular and abridged version of the Liber Usualis, a compendium of Gregorian chants sung during the eight Canonical Hours.  The Liber Usualis is rooted in Medieval monasticism, but it had to be restored after the French Revolution (1789-1794) and the Directoire (2 November 1795 until 10 November 1799).

Therefore the Liber Usualis Benedictine monks use today is a restored compendium of Gregorian chants.  It was first edited in 1896 by Solesmes abbot Dom André Mocquereau (1849–1930) FR.  (See “Liber Usualis,” Wikipedia.)  Moreover, the Second Vatican Ecumenical Council, which introduced the use of the vernacular in Catholic liturgy, “mandated that Gregorian Chant should retain ‘pride of place’ in the liturgy (Sacrosanctum Concilium, 116.)” (See “Liber Usualis,” Wikipedia.)

Although used by lay Christians, all Books of Hours, Medieval books, are religious in spirit and reflect a motivation to participate in the liturgy of the hours observed by monks.  Yet, Books of Hours differ from the Liber Usualis. They are not decorated.

First, they are shorter

The liturgical content of Books of Hours consists of:

Other than the obligatory content, Books of Hours could include heraldic emblems, coats of arms, information necessary to its owner, genealogical information, etc.

Second, they are works of art: Illuminations and Calligraphy

Because they are shorter than the Liber usualis, Books of Hours leave room for enluminures (illuminations) and fine calligraphy, the main artistic elements of Jean de France’s “Très Riches Heures” and other luxury Books of Hours.  Enluminures were miniature paintings designed to reproduce the luminosity of stained glass.

So not only did Books of Hours include liturgical, devotional and personal contents, but they are also works of art.  It is mainly as works of art that they have come down to us.  Illuminated pages of Books of Hours were genuine miniature paintings and were not bound, at least not originally.  They were independent folios bound at a later date. 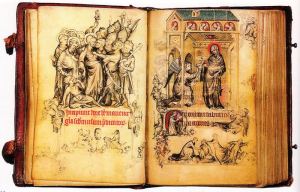 Illuminations could be extremely costly, depending on their sophistication, the time required to illuminate the text, the pigments and other materials used to make the colours, the “paper” on which the artist(s) created his or her illuminations and, of great importance, the skills of the scribe.  Let us look at the paint and the paper artists used.

The paint used by artists to decorate Books of Hours was a very durable form of gouache.  The colour was made from various pigments, including expensive lapis lazuli, mixed or crushed in a binder (un liant).  However, when artists used gold or silver, they usually applied it in flat sheets or a “leaf.”

Moreover, Books of Hours are associated to the history of paper.  Now the history of paper finds its origins at an earlier date.  Egyptian papyrus was manufactured in the 3rd millennium BC.  In the case of Medieval Books of Hours, however, one used parchment (parchemin), a writing membrane made from the skin of sheep, goats, or calves.  The finest paper was vellum (from the old French vélin, “calfskin”).

Where calligraphy is concerned, Books of Hours are an important step in the history of printing, as are illuminations, our illustrations.  In calligraphy, we find the ancestors to our fonts.  Accomplished scribes wrote so beautifully that the calligraphy of Books of Hours was a work of art in itself. Excellent scribes seldom made mistakes and, for the fifty or so years that followed the invention of printing, printers left room for illuminations to be inserted and, in particular, for initials to be rubricated (red) rather than “historiated.”  These books are called incunables. 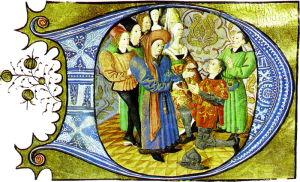 The historiated “D,” to your left, shows Charles d’Orléans (24 November 1394, Paris – 5 January 1465, Amboise) receiving homage from a subject.  Painting historiated letters must have been a true challenge to miniaturists as the letters were a miniature within a miniature.  Some miniaturists used a lens.  Books of Hours were a collaborative project.

Ordinary and Luxury “Books of Hours”

The above-mentioned Hours of Catherine of Cleves (c. 1440), offered to her as a wedding present, is an example of a luxury book of hours.  Catherine’s horæ, the Latin word for “hours,” are decorated with 158 colorful and gilded illuminations.  (“Hours of Catherine of Cleves,” Wikipedia.)  Miniaturists therefore spent several years preparing her wedding present.  They also spent years producing the Hours of Jeanne d’Évreux, Queen of France, c. 1324–28, by Jean Pucelle (French, active in Paris, 1319–1334).  Catherine’s hours are housed in the Cloisters at the Metropolitan Museum of Art, N. Y.  It contains twenty-five full-page miniatures and approximately seven hundred smaller enluminures and was first bought by Jean de France, Duc de Berry.

However, less affluent and, at times, poor Christians, including servants, also owned a Book of Hours.  Tens of thousands Books of Hours were made. Thousands are still available.  These may have had a few illuminated pages and may have been manuscripts, but the humbler Books of Hours were seldom the products of great artists.  Moreover, some were printed, but occasionally the printer left spaces that could be hand coloured. These were the incunables.

In my post on the Très Riches Heures, I mentioned that Books of Hours combined Christian elements, elements predating Christianity and personal information.  So Books of Hours are not entirely Christian works and a secular form of the Benedictine Liber Usualis.  For instance, Medieval Books of Hours use Psalms from the Old Testament.  “The book of hours has its ultimate origin in the Psalter.” (See “Book of Hours,” Wikipedia.)

Books of Hours also have “pagan” roots. They were Horæ in Latin Antiquity, a word still used in the Middle Ages, and were inspired by the cycle of nature, the degree of light and darkness,[ii] and the appropriate Labours of the Months.  As I mentioned in a recent post, Candlemas: its Stories & its Songs, Greek Poet Hesiod, who is believe to have been active between 750 and 650 BCE, wrote a Works and Days that Wikipedia describes as a farmer’s almanach.

In this respect, Jean de France’s Très Riches Heures de Jean de France, Duc de Berry resembles Hesiod’s Works and Days.  The Très Riches Heures feature a monthly page consisting of a full-page painting and a page featuring an image, above which there is a semicircle that shows the twelve signs of the Zodiac as well as the ecclesiastical lunar calendar, full moon and new moon, yet another manner in which Books of Hours predate Christianity.  As calendars, Books of Hours span civilizations, but may not contain illuminations and fine calligraphy.

In short, Medieval Books of Hours are a very rich legacy rooted in the Liber Usualis and in seasons forever new.  However, this does not preclude a resemblance with Latin horæ and borrowings, some from a more distant past.  Pictures predate Christianity as do calendars, almanacs, labours of the months: seasons.  In this regard, Books of Hours can be linked to earlier works.  They also constitute a step in the history of printing and a history of books.

I must close here, but our next step is a glance at illuminated manuscripts that are not Books of Hours.  Under “Sources” below, I have mentioned Psalters.  But, among illuminated books, there were Gospel Books, Responsorials, Antiphonaires, Missals, Apocalyptic books, Breviaries, hagiographic books (lives of saints) and other illuminated manuscripts.

N.B.  Some of the illuminations painted for Berry’s Book of Hours inspired some of the backdrops to sets used by Laurence Olivier (22 May 1907 – 11 July 1989) in his film of Shakespeare’s play Henry V which he made in 1944 on the eve of the Normandy invasion.  (Online Library of Liberty.)