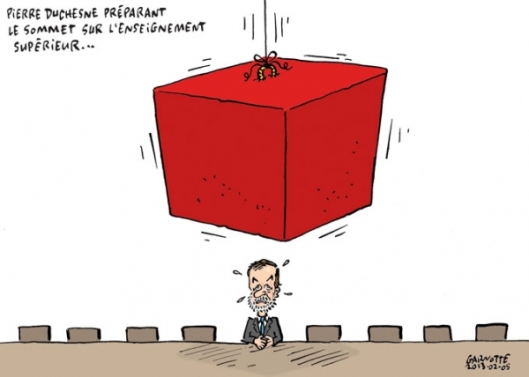 Tuition Fees: Pierre Duchesne getting ready for the Summit (Garnotte 2013-02-05)

For pictures by cartoonist Garnotte, see Garnotte or http://www.ledevoir.com/galeries-photos/les-caricatures-de-garnotte/105537.
During the 2012 student strike, a red square was worn by students and sympathizers.
(Photo credit: Le Devoir )

Former Premier Jean Charest (born 1958) was in France meeting with President François Hollande (born 1954). According to the 5 February 2013 issue of Le Devoir, no one knew what they were discussing, but we were told yesterday, 6 February 2013) that they were discussing business. Monsieur Charest, a veteran politician and the former Premier of Quebec, was not reelected in his own riding: Sherbrooke, Quebec.

McGill outgoing President on the forthcoming Summit on Education, etc

There are fewer full-time university teachers in Quebec than outside Quebec.  In Quebec universities, numerous teachers are hired on a part-time basis and must travel between two or three universities to make a meagre living.  Moreover, concessions are made for students who are first generation university students.

I am also sending you an article on Bill-14.  It would transform bilingual communities into unilingual communities, if the English-speaking population drops to below 40% of the total population. (See CTV News.)  Quebec wishes to protect the French language, (as does Canada), but there may be friendlier and more effective ways of doing so than the current attempts to marginalize its English-speaking population.  What about French-speaking Canadians living outside Quebec?

Working Group on Healthcare or the Council of the Federation: Quebec walks out

In yesterday’s Devoir, I also read that Quebec had left a Working Group on Health Care. (See The Globe and Mail.)

The Estates General on Quebec Sovereignty

France’s Position on the Question of Quebec Sovereignty

Here is another useful link regarding France’s position with respect to Quebec’s sovereignty. (See The Huffington Post.)

I am posting this article because English-speaking Canadians often wonder what Quebecers want? I do not think I can provide an answer to this question.

Reflecting on the possible repercussions of sovereignty for Quebec seems a good idea. There has to be a bona fide (in good faith) assessment of gains and losses should Quebec leave confederation. Indépendantistes must consider the consequences of secession, or a form thereof. Truth be told, it would be in the interest of the rest of Canada to define its position should Quebec chose not to remain within the current confederation. Will the rest of Canada be tolerant or will we face disorder?

However, Quebec has not seceded and Québécois may well decide to remain a province of Canada.  First Minister Alex Salmond of Scotland has secured an agreement with the Prime Minister of the United Kingdom regarding a referendum. But the people of Quebec have not said yes and under the terms of the Clarity Act (popular in Quebec [See The Globe and Mail.]), passed in the year 2000, independence cannot be a unilateral decision.

“The legislation says secession can occur only through constitutional reform, not a simple vote. It also puts restrictions on the question that can be asked in a referendum and how large a majority is required for a Yes vote.” (See Paul Waldie, The Globe and Mail.)

Much of the above confuses me.

[i] Monsieur Duchesne is the Quebec Government’s Minister of Higher Education, Research, Science and Technology.