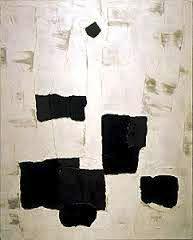 I am working on perhaps two posts dealing with Refus global (1948).  Its author was Quebec artist Paul-Émile Borduas (November 1, 1905 – February 22, 1960). There were 16 signatories, listed in Refus global (Wikipedia).  Only 400 copies were published, selling for a dollar a piece, half of which did not sell.  Refus global says little about abstract art and André Breton‘s surrealist automatism, or stream of consciousness.  It’s about Quebec.

Refus global (Total Refusal) “was an anti-establishment and anti-religious manifesto released on August 9, 1948 in Montreal by a group of sixteen young Québécois artists and intellectuals that included Paul-Émile Borduas and Jean-Paul Riopelle.” (Refus global, Wikipedia)  I will quote a section (one paragraph) of Refus global that describes Québécois as the “priest-ridden” and economically downtrodden province it was called (the Church was rich, the people were poor).

The Church being the “repository” of “faith, knowledge, truth, and national wealth,” Québécois were kept unaware of “the universal progress of thought,” or in “complete ignorance” of the “progress of thought” or may have learned about it in an expurgated or “distorted” manner. The paragraph I am quoting provides a mere glance at Refus global, in its totality, but it is revealing.  However, the “establishment” is not confined to the Church.  Moreover, the manifesto mentions the influence of Jansenism and addresses such questions as ethnocentricity and fear (see the video).

“We are a small people huddling under the shelter of the clergy, who are the only remaining repository of faith, knowledge, truth, and national wealth; we were excluded from the universal progress of thought with all its pitfalls and perils, and raised, when it became impossible to keep us in complete ignorance, on well-meaning but uncontrolled and grossly distorted accounts of the great historical facts.” (Refus global in The Canadian Encyclopedia)

I was a child in the province condemned by Borduas and fifteen other signatories.  At the time, nuns (sisters) were our teachers and boys and girls attended different schools.  The nuns, many of whom came from France, ours did, were so devoted to us.  They did not work from nine to five.  They were always preparing learning material for us and often used innovative teaching approaches.  They made sure we could study music for little or no money, and provided practice-rooms.  They played baseball with us.  They took us on outings: factories, etc.  They fed the children who arrived at school famished and, on cold days, they made sure we returned home dressed to face a blizzard.

Thousands of New Yorkers must find temporary lodgings.  Sandy was the storm of a lifetime and a wake-up call regarding the environment.  How will voters get to polling stations?  It could well be that, compared to the Quebec of my childhood, a Republican administration might soon invite a much sterner Total Refusal than Borduas’s Refus global.  However, I would not dare underestimate the citizens of the United States of America as I would insult some of the finest minds in the world, beginning with President Obama.