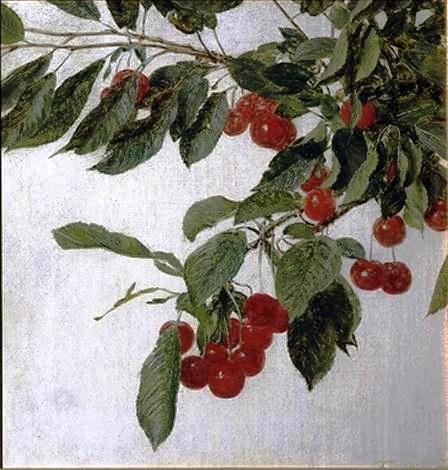 Fantin-Latour befriended many artists, some of whom became prominent Impressionists or transitional figures, such as Édouard Manet.  For his part, Fantin-Latour chose to paint in a more conservative and crisper manner and worked with Gustave Courbet.  But Fantin-Latour also met American-born British artist James MacNeill Whistler who very much admired Fantin-Latour still-lifes and introduced Fantin-Latour to a British public.  Fantin-Latour was so successful in Britain that he became better known in England than in France.

Fantin-Latour married Victoria Dubourg, an artist, and spent his summers at her family’s country estate near Orne, Normandy.  So, by and large, he lived a very stable life which is reflected in his art.  He never reached stardom, but his art has endured and will no doubt continue to endure.

In 1875, aged 68, Fantin-Latour died of lyme disease, a tick-borne disease that was almost impossible to treat before antibiotics became available.

Yesterday’s blog depicted what I would call “tough leadership.”  The October Crisis of 1970 was a major event in Canadian history.  Prime Minister Pierre Elliott Trudeau implemented the War Measures Act which had never been done in peacetime.  His “Just watch me” has remained as famous as his “There’s no place for the state in the bedrooms of the nation,” a statement he made at the time the Omnibus Bill (Bill C-150) or the Criminal Law Amendment Act, 1968-69, designed when Pierre Trudeau was Minister of Justice and the Right Honourable Lester B. Pearson (23 April 1897 – 27 December 1972), Canada’s Prime Minister and a Nobel Peace Prize laureate for his role in defusing the Suez Crisis.

The Sixties in Canada

Third, Prime Minister Pearson convened the Royal Commission on Bilingualism and Biculturalism which led to the Official Languages Act (September 9, 1969), since amended but nevertheless in force.

9 thoughts on “The Art of Fantin-Latour & Canadiana”