We have already seen two paintings by Isaac Levitan’s (August 30, 1860 – August 4 1900).  Isaac Levitan, a Jew, was a Lithuanian-Russian artist and he created the “mood landscape,” lyrical landscape paintings.  Levitan was associated with the Peredvizhniki (wanderers), a group of artists who sought more freedom than was allowed by academic art.  Levitan was a friend of Nikolai Chekhov, a painter, and also befriended Nikolai’s brother, Anton Chekhov.

Nikolai had died of tuberculosis in 1889 and, as mentioned in earlier posts, Levitan spent the last year of his life at Anton Chekhov’s house, in Crimea.  Levitan died of a terminal illness at the age of forty.  Anton, a medical doctor, died of tubercolusis in 1894.

Despite ill-health, Levitan was extremely productive.  According to Wikipedia, “Isaac Levitan‘s hugely influential art heritage consists of more than a thousand paintings, among them watercolors, pastels, graphics, and illustrations.”

The above painting reminds me of Canada where birch trees are plentiful.  You probably remember from our voyageurs blogs that canoes were made of birch.  If one was destroyed, voyageurs and Amerindians could build a new one quickly by helping themselves to what birch trees provided. Nails were not used in building canoes. 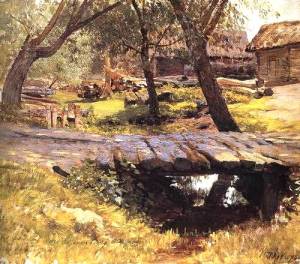 Bridge, Savvinskaya sloboda, 1884
Savvinskaya sloboda near Zvenigorod
(please click on the pictures to enlarge them)
Tchaikovsky (7 May 1840 –  6 November 1893)
Andante Cantabile for orchestra and cello
Yo Yo Ma (b. 1956)