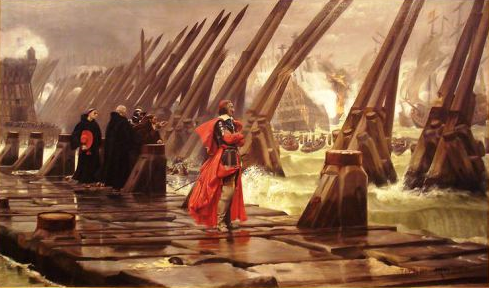 Henri-Paul Motte (12 December 1846 – 1922) was a 19th-century French artist and painter from Paris.  He is best known for his painting of the Siege of La Rochelle, a depiction of Cardinal Richelieu, featured above. He completed the painting in 1881.

As I looked for information on the picture at the head of my post, I discovered that Anne de Joyeuse or Anne de Batarnay de Joyeuse, Baron d’Arques, Vicomte then Duc de Joyeuse (1560 or 1561 – 20 October 1587) was a favourite of Henri III, King of France. His wedding portrait shows Catherine de’ Medici (13 April 1519 – 5 January 1589), and Henri III. The first ballet de cour, “Le Ballet comique de la Reine” was performed at the wedding of Anne de Joyeuse and Marguerite de Vaudémont, in 1581.

Joyeuse was a very active participant in the French Wars of Religion, so active that he allowed the massacre of 800 Huguenots during a campaign in Poitou (the Massacre of Saint-Éloi, 21 June 1587).

The King, a Catholic, was not pleased, which allowed me to see an aspect of Henri III I was not aware of. As for Anne de Joyeuse, he was defeated by the Huguenots, at the Battle of Coutras, in 1587, and was taken prisoner. He tried to buy his way out of certain death, but the massacre de Saint-Éloi had taken place in June and was still fresh in the mind of his captors who killed him.

Well, I will feature more music composed by Louis XIII (1601-1643), King of France, who preferred to join his friends at his hunting lodge at Versailles and loved music.  He did not live at court, le Louvre. He did, however, witness the Siege of La Rochelle.  I am including two pieces by Louis XIII. In fact, it is the same piece but played first by a pianist and second by a harpsichordist. It was composed for the harpsichord. 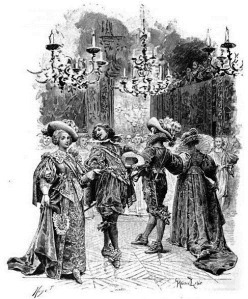 1 thought on “The Duc de Joyeuse & Louis XIII as Composer”