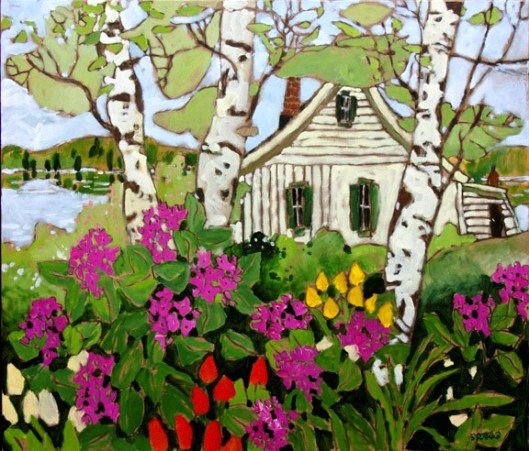 (Claude A. Simard is featured with permission from La Galerie Walter Klinkhoff, Montreal)

Today, I will start and perhaps finish writing about our last Regionalist Novel in Quebec: Ringuet‘s Trente Arpents. If you are interested in French-Canadian literature and use my posts as further information on both Canadian literature and history, you may wish to keep the list below. There are other romans de la terre or romans du terroir, or novels of the land (regionalism), but the works listed below are fine representatives of this school, and some are classics. The theme underlying these novels is survival, as in Margaret Atwood‘s Survival.

Classification: The Canadien runs out of Land

I do not want to put these novels into little boxes, but a moderate degree of classification is necessary. Maria Chapdelaine, by Louis-Hémon, a Frenchman, tells the entire story. However, it does not convey the despair of those French-Canadians who had to leave Canada because they the thirty acres allotted their ancestors in the seventeenth century had shrunk. The exodus was a tragic and quasi-genocidal episode. Quebec could not afford to lose close to a million inhabitants.

The finest depiction of the Exodus is Ringuet’s (Dr Philippe Panneton)  Trente Arpents or Thirty Acres.

1.  In Menaud, maître-draveur, Félix-Antoine Savard‘s novel, no explicit ideology is expressed, but Englishmen will be renting the mountain so they can harvest its riches. Menaud feels dépossédé (disowned). A French-Canadian no longer “tied” (lié) to the land, le Délié, will be pocketing the rental money. Savard’s novel is a masterpiece. It is a poetical, evocative, and “green” novel. Do not abuse nature.

2.  Le Survenant (and its sequel: Marie-Didace), Germaine Guèvremont‘s novel is also very poetical. It has a bucolic and, at times, spell-binding quality. The land is rich and it still feeds French-Canadians. In The Outlander (Le Survenant), the central character, is both liked and feared.

La Terre paternelle and Charles Guérin are Patrie littéraire novels. They were written in the wake of Lord Durham’s report, who described French-Canadians as having no history or literature.

The “Bad” Englishman and the “Vendu” (sold)

I will be writing about Laurendeau, l’Action nationale, Refus global, etc.