Westward the Course of Empire Takes its Way (1861) 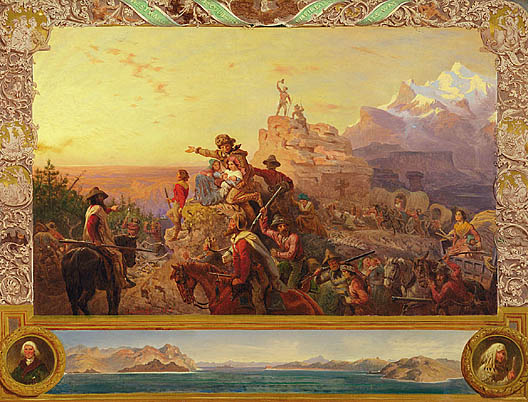 American westward expansion is idealized in Emanuel Leutze‘s famous painting Westward the Course of Empire Takes its Way (1861). The title of the painting, from a 1726 poem by Bishop Berkeley, was a phrase often quoted in the era of Manifest Destiny, expressing a widely held belief that civilization had steadily moved westward throughout history. (Wikipedia: Manifest Destiny)

In 1845, John L. O’Sullivan (15 November 1813 – 24 March 1895), a journalist, coined the term “Manifest Destiny” in an article published in the Democratic Review. In this article, he favoured the annexation of Texas, not so much for the purpose of territorial expansion as for moral reasons. In the same article, he also promoted the annexation of the Oregon Country.

The term Oregon Country referred to the ownership of Pacific Northwest. It included Fort Vancouver, Fort Victoria and other forts which Simon Fraser (North West Company [NWC]) and other fur-traders and explorers had travelled. The northern part of what was called the Oregon Country and later the Columbia district had been reached by land with the help of voyageurs and Amerindians, and the Hudson’s Bay Company owned part of that land which it used for fur-trading purposes. On the map below, one can see the “disputed area.”

Under James Monroe (28 April 1758 – 4 July 1831) and John Quincy Adams (11 July 1767 – 23 February 1848), the author of the Monroe Doctrine (2 December 1823), and perhaps emboldened by the Louisiana Purchase (1803), some Americans started to believe that they were destined, as quoted above, “to establish on earth the moral dignity and salvation of man.” In particular, Americans were to go Westward.

The whole continent of North America appears to be destined by Divine Providence to be peopled by one nation, speaking one language, professing one general system of religious and political principles, and accustomed to one general tenor of social usages and customs. For the common happiness of them all, for their peace and prosperity, I believe it is indispensable that they should be associated in one federal Union.

Such an ideology may have been perceived as an impediment to British expansion Westward and, eventually, to Confederation, which would unite Canada’s provinces. Sir Alexander Mackenzie was the first European to cross North America north of Mexico. Credit is also due American-born Canadian explorer Simon Fraser (20 May 1776 – 18 August 1862 [NWC]). He had travelled down the Fraser river and reached the Pacific. The British were therefore in the Oregon Country and had claims to the territory.

“resolved standing boundary issues between the two nations, and allowed for joint occupation and settlement of the Oregon Country, known to the British and in Canadian history as the Columbia District of the Hudson’s Bay Company, and including the southern portion of its sister for district New Caledonia.” (Wikipedia: Treaty of 1818)

The Hudson’s Bay Company had not been in a hurry to see this territory settled.  However, there were US settlers arriving in the Oregon Country. As a result, in 1841, James Sinclair, of the Hudson’s Bay Company (HBC), took Red River Colony settlers west from Fort Garry. This was an attempt to retain Columbia District as part of British North America. He chose to guide twenty-three families to the Columbia district. The group consisted of one hundred twenty-one people.

“Most of the families were of mixed-race (Métis) and were headed by men who were well-known to Sinclair and who were capable hunters, well-suited to living off the land; while on the trail and as pioneers in Oregon Country.”  (Wikipedia: James Sinclair)

It was a brave effort on Sinclair’s part, but only Métis were able to make so difficult and lenghty a journey as could his Métis families. At any rate, eight years later, in 1849, under the terms of the Oregon Treaty, Britain “ceded all claims to land south of the 49th parallel” to the United States, except for Vancouver Island and little coastal islands that became the Colony of Vancouver Island.

In short, one could now settle in the United Colonies of Vancouver Island and British Columbia, but how could one get there? One obstacle, the Monroe Doctrine, had been circumvented, but another obstacle remained: getting across the Rocky Mountains: 800-km wide.

Text of the Oregon Treaty. PDF

When Confederation was achieved, in 1867, the border remained unchanged and Canada now extended from sea to sea.  However, travelling from sea to sea or moving to what is now British Columbia was well-nigh impossible. The Panama Canal had not been built. Building started in 1880 but was not completed until 1914. You might remember that John Jacob Astor (The American Fur Trade Company) asked Gabriel Franchère, to take voyageurs from New York City to Fort Astoria, at the mouth of the Columbia river, on the Tonquin. They travelled around Cape Horn (c. 1811).  Canada would need a railway so settlers could reach the West Coast.

Let me pause by stating that the Fathers of Confederation knew about the Monroe Doctrine and that they did fear active expansionism on the part of the US. In fact, I do not fully understand why the United States let the northern part of the Oregon Country go to Britain and ultimately to Canada. Obviously, there was good will on the part of both parties and I believe that eventually both parties were winners, except that the disputed land was being taken from Amerindians.

2 thoughts on “From Coast to Coast: the Oregon Country”