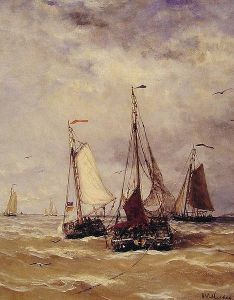 The Art of Hendrik Willem Mesdag

When I discovered the work of Dutch marine painter Hendrik Willem Mesdag, I caught a tiny glimpse of all things infinite.  Look at the yellow and mauve hues of the sky in the picture to your left.  If I lived near a marina, I would produce paintings of tall ships and sailboats.  Mesdag’s paintings therefore speak to me.  They are immensely evocative.

My ancestors crossed the ocean in sail boats to settle on the North-American continent.

(please click on the pictures to enlarge them)
Beethoven: Sonatas for Cello and Piano, Rostropovich & Richter
(also click on the title to hear the music)

Hendrik Willem Mesdag was born in Groningen, the Netherlands.  He was the son of banker Klaas Mesdag and his wife Johanna Wilhelmina van Giffen.  Hendrik Willem’s father was an amateur painter and encouraged his son to persevere in his artistic endeavours.

Mesdag married Sina van Houten (also an artist) in 1856 and, after the couple inherited a fortune from Sina’s family, Mesdag was able to go to Brussels and study art under Willem Roelofs who would later join the Hague School (described below).

In 1868, the Mesdags moved to The Hague, which allowed Mesdag to paint his seascapes with sailboats, a vanishing world.  In 1870, Mesdag won a gold medal for The Breakers of the North Sea at the Paris Salon, the official art exhibition of the Paris Académie des Beaux-Arts.  Between 1748–1890, the Paris Salon was “the greatest annual or biannual art event in the Western world.” (Wikipedia)

Mesdag is associated with The Hague School and was also a member of the Pulchri [beauty] Studio, an art society of which he was elected chairman in 1889.  Members of the Hague School were painters who, following members of the plein air (outdoors) Barbizon School, Corot for instance, painted their surroundings: landcapes, seascapes, farm animals (cows, sheep, etc.).  They painted their world, yet a world we can identify as well as identify with, and which can therefore be especially evocative.

Critic, Jacob van Santen Kolff, who coined the term The Hague School, spoke of “a new way of seeing and depicting things” and of an “intent to convey mood, [where] tone takes precedence over color.”  Hague School artists had a preference for the consummately dramatic ‘bad weather’ effects, and for a “gray mood.”  Many enjoyed using dark colours, which is, in fact, a characteristic of the The Hague School. (Wikipedia)

It is true that an approaching storm is quite literally breathtaking.  We wait for what is about to happen and, if what happens is not destructive, nature is refreshed and acquires an intoxicating smell.  There is, in the world of art, a love of approaching storms and of storms.  They are a drama and they have a resolution.  This could be said of Beethoven’s Sixth Symphony, “The Pastoral.”  As for Mesdag, a marine painter, his moods are contained in seascapes and sailboats.

Members of the Hague School

Wikipedia is very generous.  Its Hague School entry provides us with the name of all its members and each name is a link, which affords us the privilege of spending several hours visiting various “art galleries,” private collections and sites featuring works for sale or sold in art auctions.

Not all members of the Hague School chose to depict the sea.  They in fact depicted a variety of motifs or “subjects,” but all painted familiar scenes, or what they saw or their vision of what they saw.  They therefore produced landscapes, seascapes, paintings of farm animals and other subjects.  They were chroniclers and shared a common umbrella in the fine arts: Realism and Naturalism.  However, it was first and foremost a Dutch school.

Looking at the works of the Hague School, one thinks first of the Dutch masters, such as Vermeer.  Second we think of earlier artists, the Limbourg brothers, miniaturists who decorated Jean de France’s book of Hours, Les Très Riches Heures du Duc de Berry.  But let us return to Mesdag and witness the whims of fashion.

According to Wikipedia, “[i]n 1880 [Mesdag] received a commission from a Belgian company to paint a panorama giving a view over the village of Scheveningen on the North Sea coast near The Hague.”  However, Mesdag bought his own Panorama at an auction when the buyers’ company crumbled.  Suddenly, realism and naturalism had gone out of fashion.

Hendrik Willem Mesdag’s Scheveningen Panorama seems to have suffered the same fate as Carl Larsson’s Midvinterblot, a rejection of realistic and naturalistic art.  Abstract art can be extremely beautiful, but there is nothing wrong with Leonardo da’ Vinci’s “Mona Lisa.”

There is a sense in which this story is its own conclusion. Fashions change, but the Pendulum swings back.  More importantly,there are works the beauty of which can never be Diminished. This discussion is not over.

The return of the fishing fleet on Scheveningen Beach, by Mesdag